Well color me surprised on two separate counts. One, I didn't think Sansevieria trifasciata bloomed in the summer (both times I've seen it previously have been during the winter), and two, I had just assumed that since it's the same species of plant, the blooms would be the same regardless of the cultivar. But no.

This is the kind of flower I'm used to, the kind I've seen before: 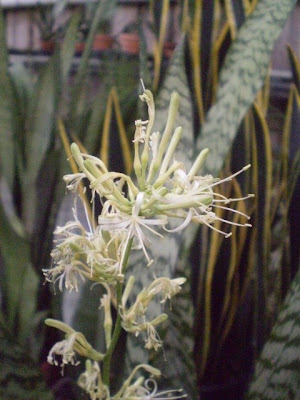 It's got a scent to it, though not so much during the hours I'm at work: when my own plant bloomed, I remember I generally didn't notice the odor until about 6 PM, when it suddenly got really strong. Also the odor was considerably weirder, with a sort of autumn / funereal slant to it, particularly when the flowers were new. The work plant pictured here had more of a generic flower scent to it, though some of that may be because the flowers are mostly spent already. 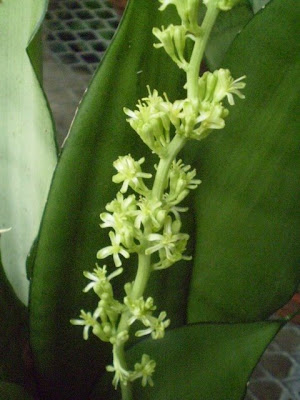 The 'Moonglow,' by contrast, has not had much of a detectable scent at all, but that's not the strangest thing about it. If somebody had just shown me both sets of flowers side by side, without telling me what they were from, I wouldn't necessarily have even assumed that they were related, much less the same species. I want to know why 'Moonglow's flowers are so much smaller. And whether this is necessarily related to 'Moonglow' itself being a smaller plant. I want to know what's happening here, at, like, the genetic level.

I don't have any genetic answers for you, but it is not unusual for cultivars to have somewhat different flower forms from the species. Think of species grown for their flowers rather than their foliage; often the point of developing a cultivar of such plants is to make the flowers look different. Different colors, different size, altered shape.

Take the Rudbeckia hirta with the green center in yesterday's post. (Was it 'Irish Eyes,' 'Prairie Sun,' or something else? I grow 'Prairie Sun' and I love it.) You said you wouldn't have guessed that it was a Rudbeckia, right? Same deal.

And to my eyes, the S.t.'Moonglow' flowers aren't that radically different from that of the species. But then, I've seen the flowers of a couple of other species of Sansevieria besides S. trifasciata (S. hargeisiana and a NOID plant of mine) and they are all quite similar to the flowers of the S.trifasciata you posted.

I hope someone can come along with some more scientific answers, because I am eager to learn more as well.

the white one more beautiful for me.