Fair warning: the image in this post might be disturbing to some people. I mean, I don't really get why it would be, but if you know you're touchy about dead animals, even when they don't look like animals anymore, then you should maybe just skip this. I'll understand.

Or, well, no, I won't understand. Doesn't bother me a bit, after all. What I mean to say is that I'll respect your choice not to look. You know your stomach and nervous system better than I do. No big deal.

Carrion beetles are actually pretty cool, in their proper context, but being mostly a city boy, I don't think I've ever actually seen them at work until Monday at Kent State Park. Not that I would expect to have seen them before then. I mean, I don't keep dead animals around the house. (Well, that one time. Long story. Best not to ask.) 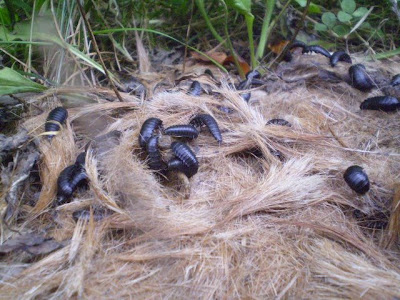 Necrophila americana larvae. If you listen close, you can hear them singing "Working in a Coalmine."

Technically, I suppose, I still haven't seen them: these are the larvae, not the beetles. The beetles are a lot cuter. (No, seriously. As beetles go, I mean. You'd rather have them than have Japanese beetles, I promise you.) But still: surprisingly clean for something that makes a living eating dead animals, am I right?

No idea what animal is being dealt with here: it was pretty far gone when we came across it. Not so much an ex-animal than a really big and unkempt toupee. Not big enough to be a deer, I think, and I can't think of anything else that color that might be dead in the park.

One realization: in the "Buffy the Vampire Slayer" episode "Listening to Fear" (season five, episode nine), the guy who came up with the costume design for the Queller demon was totally ripping off Necrophila americana. I'd link to a picture, but I couldn't find one. You'll just have to believe me. Or track down the episode and watch it. Believing me is less trouble.

If you haven't had enough, there's a really large, close-up picture of a larva here.

I totally didn't believe you but I clicked on the link, and that beetle was pretty cute!

Carrion my wayward son
There'll be peace when you are &c.

OMG i should not have looked.....lol, i am having an adjustment prob to the massive spiders here, i'd move away if i ever saw something that big that can crunch......ewww.

Next time i think i will skip the post when i am forewarned, curiosity killed the cat.....kills sleep too.