We are periodically offered, from our Florida supplier, boxes of what are called "assorted colorful foliage." This is always our best bet for something weird or cool: we've gotten bizarro Alocasias (including, most recently, 'Frydek'), Calathea ornata, Homalomena 'Selby,' and a number of other things that aren't offered any other way. Which is good. The problem is that these boxes also almost always include plants that we really don't need or want, like Alocasia 'Polly' (I swear, they sit around down in Florida trying to think of new ways to trick us into taking more 'Pollys.'), plants we can't really use (Cordyline australis, which are really only useful in group plantings in the spring -- and they sent us a couple in August), and plants that are not especially colorful or exotic at all (Dieffenbachia 'Camille,' Syngonium podophyllum 'White Butterfly'). So it's very much a gamble, with the assorted colorful foliage: there's usually something worth getting, but you have to take other stuff with it that's not worth getting.

In this last round, we got a Farfugium japonicum 'Crested Leopard.' Or at least that's how it was identified to us; the picture of f. japonicum 'Aureomaculatum' at davesgarden.com looks basically the same as our plant. If this looks familiar to any outdoor perennial gardeners in the audience, that's because this same plant is also called Ligularia tussilaginea, and resembles other Ligularias grown as perennials. 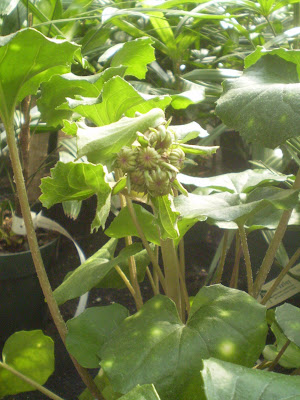 Anyway. WCW and I weren't sure what to do with it. Farfugium isn't a genus normally grown indoors (though I have a houseplant book at home that includes it, so I know it's possible to do), but we also had no idea whether it would come back if we put it outside with the perennials, plus the tropicals are more expensive than the perennials and we'd paid a lot for the plant. So in the end, I kept it in the greenhouse but priced it lowish, in the hopes that someone would snatch it up and get rid of the problem for us.

Hasn't happened. However, the plant's decided to bloom, which means it's going to sell. Probably before I can get a picture of the flowers. And I'm just hoping that nobody asks me how to take care of it, 'cause at this point all I have to go on is what my book at home says, and that makes it sound like the care is basically like for a Podocarpus macrophyllus: bright indirect light, wet, cool temperatures, humid. If the book is wrong about this, of course, that's the perfect recipe for rot. So I'm hoping I don't get asked. 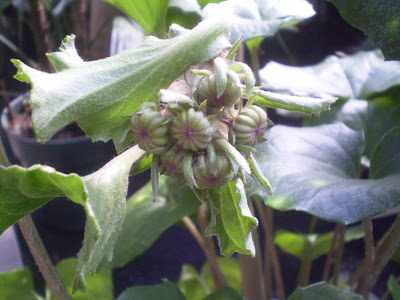 If the plant sticks around long enough that I can get pictures of the flowers, obviously I will do so. But I'm not optimistic.

I rather like Alocasia 'Polly' but it needs some positive publicity - as a cure for hangover or deters flies or Something. You need a houseplant lucky dip box!

I would like it too, if it were easier to grow. I mean, it's pretty and everything. But oy, the spider mites.