I've never understood why people like 'Hindu Rope.' It's different, granted. And normally I like different, but this is the exception. I guess my main objection is that even perfectly healthy and normal Hoya carnosas tend to look kind of under-foliaged to me, and 'Hindu Rope' looks even more so, because the leaves are all crumped into little balls.

Even if that weren't an issue, though, I still wouldn't like them, because they're prone to mealybugs (being Hoyas), and once they've got mealybugs, there's really very little you can do to get rid of them: I haven't been impressed with systemics so far (the idea is sound, but they don't work), and sprays are only useful if you can get the spray on the bugs, which if the leaves are folded four different ways at once, you can't get the spray on all the leaf surfaces, and there are always places for the mealybugs to hide. 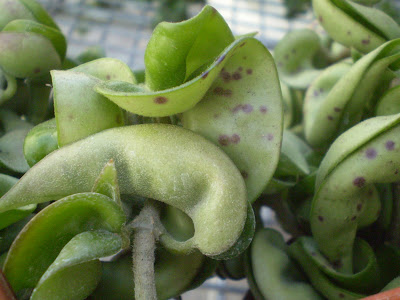 We had to destroy the Hoya in order to save it.
So what all this means is, when we found mealybugs on some of our hanging baskets of 'Hindu Rope,' we maybe overreacted a little. Systemic granules, multiple kinds of over the counter sprays, rubbing alcohol, one of the restricted-use chemicals we normally only use in the greenhouse, and probably a number of other things: there were at least three people treating these plants, probably four, and none of us were talking to one another about what we were doing until well after the fact. (As with everywhere else I've worked, communication is not an organizational strong point.) And then we stuck them outside and left them there until it was supposed to get cold overnight, at which point we brought them into a dark but warmer work room for about a week.

I checked them twice, a few days apart, without finding mealybugs. A co-worker failed to find mealybugs on them too. So we've put them back out for sale (the ones that are left, anyway: three just got thrown out, because the infestation was too far gone to deal with). Makes me nervous to have them out, though. And I don't know if the customers will want them anyway, now, with the spots. But you can't say we don't take pests seriously, at least.

Lavender and Vanilla Friends of the Gardens said...

I have many Hoyas growing in the garden, scrambling up the trees, when they are grown like this they don't have any pests. They flower strongly like there is no tomorrow. I have never liked that crinkly one and have never planted it. It looks like it is affected by a disease.