Plectranthus coleioides 'Heigh Ho, Silver' is one of those plants nobody wants. I don't know how long it's been at work, but there were some a year ago when I started, and they were brought in as an annual groundcover of some kind, which means spring, which means at least a year and a half. In the last year, I've seen one pot of it sell. One pot.

That wouldn't be such a terrible thing, except that it grows very, very quickly; in order to keep it a manageable size, we either have to put it in hanging baskets or restart plants from cuttings when their pots get full of roots. So it's labor-intensive but not especially rewarding, financially. (So why do we keep it around, then? I don't know. I keep hoping I'll find a way for it to be useful, I guess.)

I don't really get why no customers could be interested in it. It's got an unusual texture (really fuzzy and soft) and color (light green-gray), it's frighteningly easy to grow, it fills in large spaces quickly. And now they're flowering : 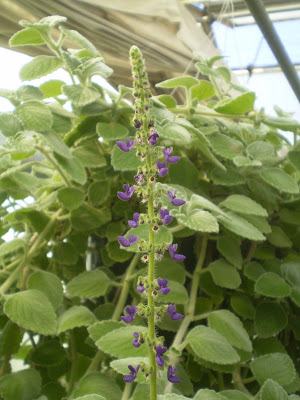 (I recommend opening the picture in a new window. I was very happy about this picture being in focus, but of course you can't tell because shrinking it to fit the post makes it all blurry anyway.)
Probably what's going to happen with these is, eventually, we're going to end up throwing them out. They gave it their best try, we gave it our best try, but this is really not working out.

I'm open to reader suggestions, though.

You've got to 'sell' this plant by making people want it.
The best way I've seen this done is by planting a few of them with 'companion' plants in a mixed group - in a pot.

There's a greenhouse in La-X, WI that does this...they find plants that look good together, bloom at different times, etc...so that there's always something interesting going on in the pot.

Which companion plants for P. coleoides 'Heigh ho Silver'? Sorry, I don't have the answer for that.

lol...you need me as a customer! I'd have bought the Ligularia before it flowered! I had one that I lost back in 2000.
I kept it on my sunporch during the winter, as that location is cold but frost-free.
My experiments have led me to come to the conclusion that my sunporch is the equivalent of a zone 7.
I keep a few zone-pushers out there during the winter.
There are plants that have to come in during the coldest nights of the winter, but I often cart them back out during the day, unless it's an exremely cold one.

Alocasia 'Polly' does really well indoors if you can keep a heat-mat beneath it....it's the warm roots that it misses indoors, IMHO, and room temperature doesn't seem to be quite warm enough.
I have one of those Jiffy brand seed starter heat-mats beneath it and some other plants that seem to need warmth at the roots.
I have 2 'Pollys' and they do pretty well there. They get some light from an east window and some indirect light from a fluorescent.

oOpS! Sorry...the 2nd part of my post was related to the 2nd 'Random Plant Event'...I should have posted there....but didn't.

If it gets to 'pitch it' time, I wonder if you'd be able to donate them to a local Habitat for Humanity chapter -- might be able to use them as a tax write off that way.

You know those Cordyline australis you received a short while ago - if they're the red coloured ones, you could plant up at the base with the Plectranthus - sans flowers, of course. Or even a dark 'ti' Cordyline - and leave the flowers.

Or a conversion from pot to hanging 'basket' container.

is this the one that smells spicy? if so put it with fragrant plants. I put mine in containers with big begonias in partial sun and I liked the results