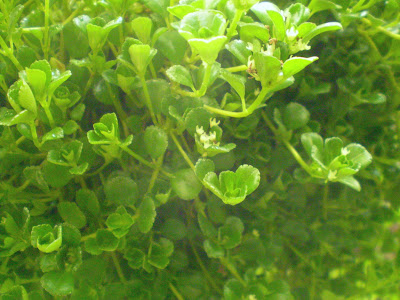 Pilea depressa is known around here as "baby toes," though sometimes around St. Patrick's Day it's "leprechaun toes" instead. It was difficult for me, when I first started this job, to make the distinction between baby toes and baby tears, which is botanically Soleirolia soleirolii: also a creeping, ground-cover-type plant.

In any case, Pilea depressa is popular. When we didn't have it, last fall, we got asked for it all the time, so I got some in and have propagated it into maybe seven or eight times the amount we had to start with. It sells steadily. Multiplying by a factor of seven or eight is a little excessive, possibly, but anything that propagates that easily is something I'm ashamed to buy wholesale, and I don't ever want to have to do that again. I'm the same way about Tradescantia pallida and Plectranthus verticillatus.

In any case, it does flower, though if the flowers aren't directly in your face you're not likely to notice them. They're tiny white eagle-claw flowers: clearly not intended to attract human attention. I have yet to try growing Pilea depressa at home: initially I didn't like it, didn't see the point of it.

I still don't see a point, as far as that goes, but I do like it now. Couldn't tell you why if my life depended on it.

Familiarity breeds contempt everywhere but in the greenhouse, perhaps. I eventually even grew to like geraniums.

Hi, Mr. S.
Pilea depressa is a favorite plant of mine, for reasons unknown. I guess I just like its little leaves. It makes me think of Soleirolia but it's easier to keep growing and it's terribly easy to propigate, as you noted. Actually, I like all the Pileas I know.
Actually, I like most of the plants I know. P. depressa is one that's not seen much around here in Hoosierland. I miss it. Thanks for featuring it.
perL
(sigh. trouble signing in.)

Heyo, I'm glad to see this one here, I'm starting a huge vertical gardening project and I needed something which vines and/or creeps, and seeing as Pilea is a favorite genus of mine, I decided to get a couple and see if they work. Also, I wanted to tell you that I trust your blog more than most gardening sites, and I'm going to be using a lot of the plants you post about. Or not, seeing as some of them seem absurdly temperamental. But that's what experimentation is for!