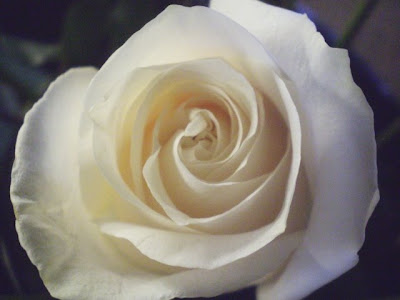 Six years ago on this date, the husband and I had been dating for maybe five or six weeks. And I liked him enormously, but due to some bad past experiences I was trying very hard not to use the L-word (no, not "lesbian." The other L-word.), reasoning that this time, before declaring my undying affection, it might be good to get to know him a bit. So, dating. Also we had some very different upbringings and very different understandings of how the world worked: he was astrology, I was astronomy; he was born of transcendental-meditating hippies, I was born of born-again glossolaliacs; he was studying religion, I had a degree in chemistry. So there were some reservations about how well that was going to work out.

And then he won a radio call-in contest and got two free tickets to a Cowboy Junkies concert in Des Moines. Which, the Cowboy Junkies' cover of "Sweet Jane" had somehow become "our song" at some point, because I had been making a habit of bringing him white roses when I visited his place (white because, again, not wanting to be pushy, not wanting to push too far ahead of where we actually were), and the song mentions white roses, and we thought the song mentions white roses but apparently it doesn't (see comments), but even if it hadn't been a special song to us, I really liked the Cowboy Junkies (having an instinctive love of all things Canadian: Canadian citizenship committees, take note!) and would have gone anyway. So we went. 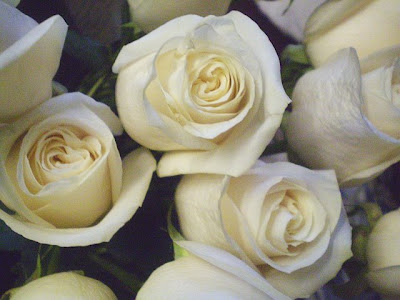 And you know, I don't actually remember the night all that well. I mean, I wrote it down in my journal: I could look it up. But I mainly remember two things. One, there was a moment before we got to the concert where I was absolutely positive that he was going to crash the car and we were both going to die. Neither of those things actually happened, but there was some abrupt braking on the interstate and that was scary. And the other thing was that after the concert, after the drive back, I realized that, whether I liked it or not, this was not all just me wanting to be in love, that I actually was in love, and I was at some point going to have to say so. Chances were going to have to be taken. I didn't say so that night; I'm not sure when it was. But I knew as of 12 October 2002 that this was going to be something.

Consequently, though we do celebrate the night we met (24 August 2002) as our "official" "anniversary," the more meaningful date to me is 12 October.

Happy Anniversary and many more ahead,

The happiest of anniversaries. I also love the Cowboy Junkies, altho I'm not necessarily a Canadaphile.~~Dee

That is a really sweet and wonderful story! Many happy returns. :)

Thanks for sharing your wonderful story. May you have many years of love and happiness together. There's nothing like being in love (with the right person!) :)

Oh, and the song is so beautiful...

I love how people get together stories.

Wishing you a Happy Anniversary, and many more years together. My dearest hope is that some day soon, you and your husband will have the opportunity to be married under the law, as well as in your hearts.

After 2.5 months, and only weeks before I was to move far, far away, my now wife and I said we were in love. Maybe it was partly the inevitable distance and the fear it'd all fall apart (we did long distance for two years), but those were some of the most intense and wonderful days, too--fear, discovery, hope, longing, confusion, doubt. A lovely after dinner drink with which to lose all the inhibitions that came us from happiness. May you both have decades of cowboy junky-ness yet to come.

Happy anniversary plus one. That was lovely.
--Kate

Congrats on the anniversary! Sweet Jane is also my favorite song, and I'm actually surprised to know another person out there even remembers it! The song doesn't really talk about WHITE roses though, it talks about "heavenly widened roses." Of course you're still entitled to like white roses (which are my favorites too, for different reasons). Lyrics of Sweet Jane below:

Happy anniversary! Loved the story. Had to look up 'glossolaliac'.
Aiyana

Heavenly WINE AND ROSES, my friends.

A reference to Ernest Dowson's "They are not long, the days of wine and roses." Which also inspired the title of the most wonderful Jack Lemmon film "Days of Wine and Roses."