At the beginning of June, we brought in a huge (about seven-foot?) Plumeria for WCW. One of the advantages of being the one to put in the orders is that I can do stuff like this for myself, if I see something I'm interested in, and WCW doesn't get final pick but she does look over the lists, and I try to keep her happy too.

Something that helps with this is, if something is unusual enough to appeal to one of us, it's often the case that it appeals to both of us, so there are two sales lined up for whatever it is. Which is important when trying to justify these orders to the boss, who, if taken strictly at her word, would rather see the greenhouse filled with only the ten to fifteen species of standards and nothing else. (Fortunately, she doesn't quite mean that, whatever she says. She just gets nervous - and understandably so, given the state of the economy right now - about having too much money tied up in plants that aren't fairly proven sellers. The problem I have with this is, all of our competitors have the exact same plants, and usually at much better prices than we have; it behooves us to make a point of having the weird stuff, because we're the only ones who will. Sorry for the digression, but it's sometimes a sore spot.)

Anyway. So when the plant actually came in, it was doing this: 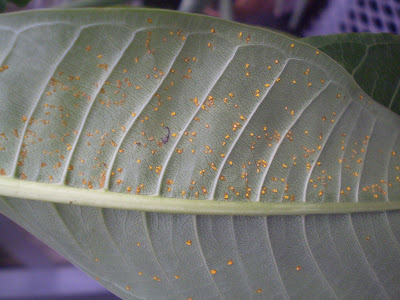 Click to enlarge. Or don't.
The new leaves would come in looking just fine, stay for a while, and then develop a bunch of small, vividly orange spots on the underside of the leaves. Shortly thereafter, the leaves would begin to go brown, curl up, and fall off. It's continued to do the same thing since she took it home. We don't think this is normal (she's had Plumeria before that didn't do this, she says), but are at sort of a loss to determine what's going on. I'm posting this in the hopes that someone in a more tropical clime, like maybe Florida (from whence the Plumeria came in the first place) might recognize the problem and have some answers. Anybody?

I agree. It is rust. Remove the effected foliage by snipping the leaf off, leaving the petiole attached (it will yellow and fall off in a few days) and treat with fungicide if necessary. I use Immunox.

I think it looks like rust too. I have a small (~2 foot) plumeria that I keep outside in the summer, but bring in during the winter (which for us is just a few months when it drops all of its leaves) - I haven't seen these spots on mine. If you don't want to use a fungicide, you might just want to defoliate it for now - and then then see how the new leaves do.