I love both of these NOIDs. The light pink one below was the one that caught my attention initially, because it was the first to bloom in this latest round of flowers: 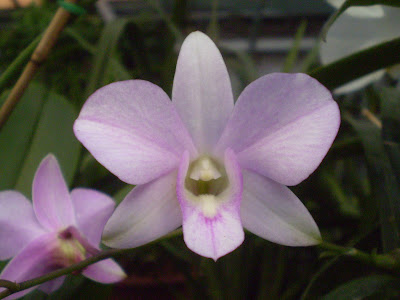 And the light pink is gorgeous, but the next one is the one I fell hard for. Once multiple buds opened and the petals straightened all the way out, it looked . . . I guess you'd call it upscale. The sort of orchid that attends art galleries, vacations in Italy, and has Scarlett Johansson on speed-dial.

It even looks like Humphrey Bogart, for crying out loud: 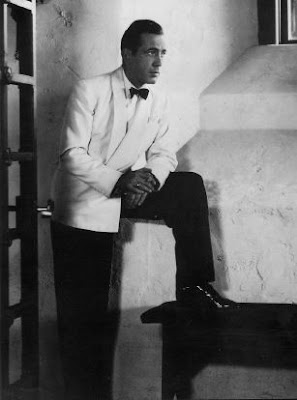 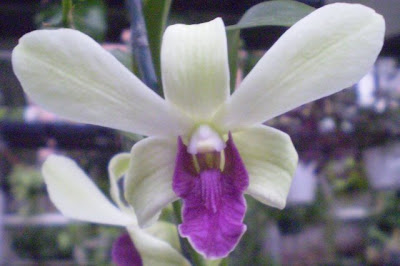 You see the resemblance, right? Sorta that whole area between the eyes and the lowest petal?
This second one looks a lot like Den. Genting Lipstick Green, though I doubt that's the actual name. There are way too many crosses out there that look too much alike for any kind of actual positive identification to be made. But anyway. I settled for buying a keiki (sort of like an offset, but keikis form on the side or end of an existing plant's cane) of it, which is a fairly low-reward, low-risk strategy. I could either spend $11 for maybe flowers someday, or $50 for flowers right now. I can't afford flowers right now. So. 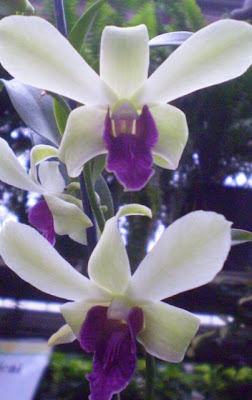 I do like that, upscale is a good term for it.

And so the obsession begins....BWAHAHAHAHHAHA!

*Ahem* Sorry about that.

Keep you eyes open for an orchid show within driving distance. There are likely at least a couple even in Iowa. :) If you can make it to a show, you'll see a lot of named varieties in bloom for far less than $50. Better selection too. In my neck of the woods (MI), shows start up generally in the late fall and hit full swing over the winter.