When we got plants from Florida in mid-August, the Yucca guatemalensis that came in had ridiculously high numbers of heads on them, like maybe twelve heads on a single cane. This is not typically advised, because a cane with that many heads will usually not grow any of them to appropriate size: all twelve will compete for nutrients and end up sort of stunted. (I don't take the heads off deliberately, though, on the theory that the customers probably prefer as much foliage as they can get. And I do want them to sell.) Anyway. So in the process of getting them off the truck and unwrapping them and putting them out on the floor, a couple of the heads got torn off, and I scooped them up and took them home, because I love Yucca guatemalensis even if they are just the plain green ones. 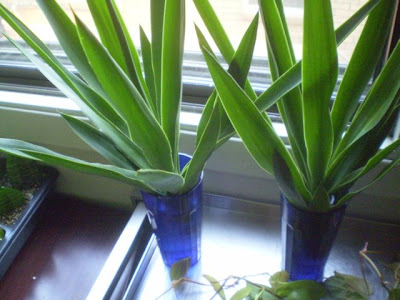 I can't say that I've ever seen anybody recommend water-rooting Yuccas (and, for the record, I don't know if this works for species other than guatemalensis), but I've done it a few times now. The first time was by accident; I cut back some too-tall plants just after the husband and I moved into our current place, a couple years ago, and there was enough chaos with the move that I didn't have time to think about what to do with them exactly. So I stuck the tops into water, figuring that that would keep them alive until such time as I could do something more proper with them, and they rooted in the water before I got around to tending to them, and then they made a perfectly smooth transition to soil. So with these, I figured I'd water-root deliberately, and whaddya know, they did just fine. 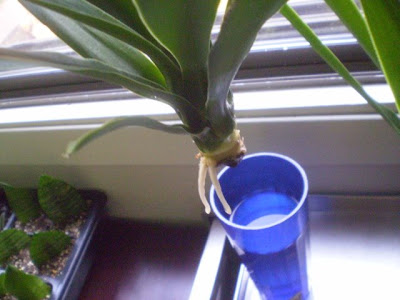 So now I have no reservations about recommending that people water-root Yucca. You'd think they'd rot, but provided that you strip off the lower leaves when they start to yellow, and change the water regularly (at least once every couple weeks; probably ideally more often than that), they won't rot, and leaf drop when transferred to soil is minimal. It almost couldn't be easier.

Can I ask you to come over and look at the begonia I was given and give me some tips on how to care for it in the greenhouse in winter and outside in summer?

That's good to know - I don't think I would have tried it.