We've seen this before; I posted about this exact same plant about a year ago, before I even knew for sure what it was. But I'm posting it again, because 1) I only have so many things to post about, 2) it's moderately impressive, maybe, that I've convinced the plant to rebloom, and 3) I'm better with the camera now than I was then, so I can do closeups that I wasn't capable of then. 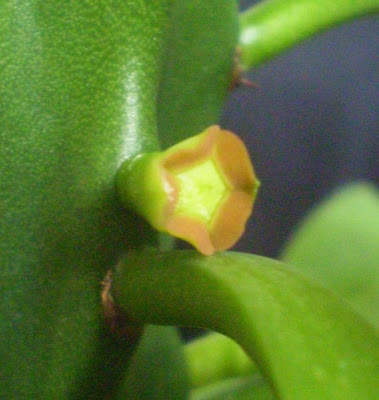 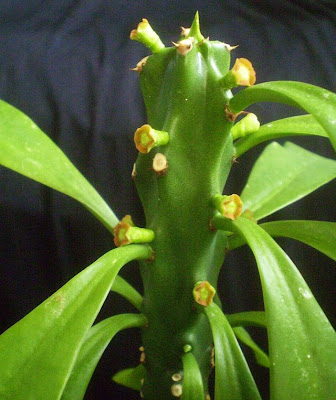 This is the same plant I took the pictures of a year ago: it just lives with me now. Last year, it continued to form new blooms for quite a while, and eventually developed little branched sprays of flowers, not individual ones like in these pictures. (For some reason, I was not motivated to take pictures of the multiples.) It remains to be seen whether this will happen with the plant now that it's out of a greenhouse, but if it was happy enough to flower in the first place, I suppose we can't rule out continued blooms. I don't remember how long the blooming lasted last year, but it seemed like it went on forever.

What in the world? That is a unique little plant there.