In late November or early December of 2008, I noticed that we had a flower bud on one of the Sansevieria cylindricas at work. At the time, I figured I'd better take a picture of it, because either it would bloom and be over before I knew it, or a customer would buy the plant -- either way, I'd miss my chance to document the process. I've seen the occasional Sansevieria trifasciata bloom, but never a cylindrica.

And so the documenting and waiting began. (The dates here might not be precisely correct: they're the dates I saved the pictures, not necessarily the dates when I took the pictures. They should be correct enough for our purposes.) 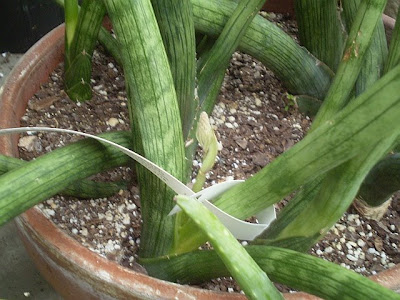 6 December 2008.
These tend to be difficult pictures to get in proper focus: my camera will automatically focus on whatever it thinks I'm trying to take the picture of, but with thin objects that are also moving around, it doesn't really have a clue.

Not that the plants are moving around so much (though sometimes they wave back and forth as the fans blow), but I can't ever hold the camera completely steady. 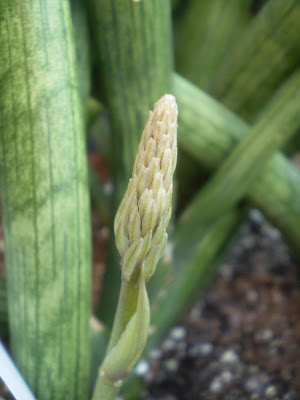 14 December 2008.
In case you're wondering: I don't buy it myself because I have absolutely no room for such a thing. The plant is actually pretty huge. (We'd had them as multiple plants in six-inch pots, but they failed to sell that way, for at least a year, so I potted several pots' worth together in 12- or 14-inch clay pots. Makes for a bigger, fuller-looking plant, but they're still not selling.) They're also kind of pricey, as one would expect for an extremely slow-growing plant in a very large pot. (Seriously: they're slower than Zamioculcas zamiifolia.) But really it's mostly the size, not the price. 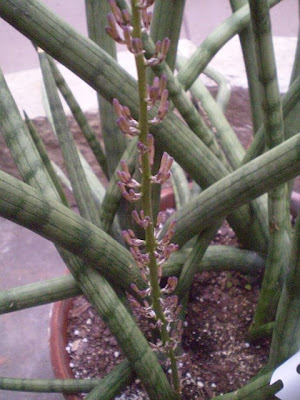 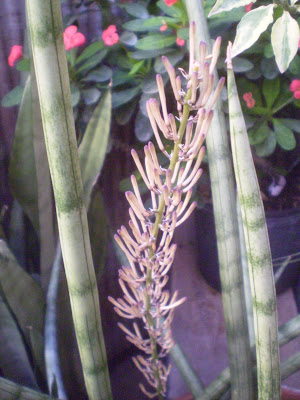 14 February 2009.
By this point I was starting to wonder what color they would be: I'd never heard of a Sansevieria flower that wasn't white, but the way the tips of the flower buds were turning purple made me wonder. 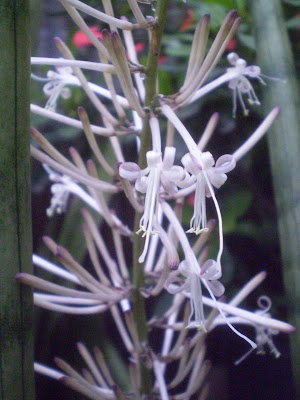 20 February 2009.
But, it turned out to be white after all. Unlike S. trifasciata, I couldn't detect any odor at all from these flowers. The proportions are different, too: longer stamens and pistils, more tightly curved petals. Check the picture out in its own window to see the detail a little better.

Differently proportioned or not, it's still pretty clearly a Sansevieria flower. I'm disappointed with the lack of scent, but whatever. Cool enough.

My Sans. cylindrica bloomed in the fall, around September. Then it bloomed a second time in late November, after I had brought it inside for the winter!

I'm beginning to think that nursery customers in Iowa City are insane. Healthy Sansevieria cylindricas going unsold? Big pot, small pot, whatever; if I lived near there, one of them would have been mine. Even if I had to save up.

I suppose that there is a more or less fixed number of genuine plant nuts per capita in any metropolitan area, and two of you already work at the nursery (you and WCW.) But there still should be at least few more people champing at the bit for those Sans (and some of the other goodies you've mentioned as non-sellers.)

I'm beginning to think that nursery customers in Iowa City are insane.

I assure you, many of them are.

I once had a S. trifasciata that flowered for me, and I was so totally delighted by that. Now I have no Sansevieria at all, and this post reminds me how elegant some of them are.

how much were they individually and how much now?

Hey Mr Subj!
I was looking for a website today on how long it took from bud to bloom on a Sans. I just noticed buds today, and have a show in May. I may still have something by then. Thanks for the pics also.
I am almost ill knowing you have large sans for sale way over there, and me in CA without. I would have offered to pay for shipping one had I known.
Anyway see you on GW,
Mentha

Just stumbled upon this, and thought I'd mention that yours looks like S. cylindrica cv. 'Skyline'.
I'm wondering, though...were you ever in the greenhouse at night? That is when the blooms have their strongest scent. It'll often be absent during the day.
I found one of these at a nearby nursery and the owner's didn't even know what it was/
Maybe that was the drawback. Even with a tag, the browsing customers had no idea it was related to the common 'mother-in-law-tongue' or whatever that common name is!

I bought a cylindrica almost a year ago for £5 and have only watered it a handful of times. It was great to see the pictures of the flowers... Now I know what will happen if I look after it a little better and repot it

Arid Lands Greenhouses has one-gallon pots for $12 or $14; I don't know how much shipping would be.

Glasshouse Works also has some, for $12 + shipping, though it doesn't say what size the plants are and for some items they propagate to order, so you could wind up waiting a long time for your plant.

All three places would probably want to wait to ship until it's warmer, though if you live near one of them (AZ, OH, CT, respectively), you might be able to buy directly from the store.

My sanseviera is blooming now. Last night, it had the strongest odor, very pleasant, filled the whole room!

This might be the most fragrant flowers ever! Almost Gardenia-like. The scent only occurs in the evening though - when the blossoms open. From start to finish - about six weeks. And very random. After over 10 years of owning my plant, it bloomed three years ago - once. then once a year ago. I had to repot it as it got huge. It had one bloom two months ago, and there are three more currently! Two in full bloom - the other has a few more weeks to go before it begins!

My cylindrica flowers every year, but is only scented at night and I think this is to attract moths that will pollinate it. The scent is quite pleasant and strong, but it fades during the day.