The husband and I went to my ex-job last Saturday, because they'd gotten in a new shipment of tropicals on Thursday. And I bought some, which was the point of going. However! I was also thinking of you, my readers, and took pictures of various things I did not buy, just because you will find them interesting. (No, seriously: very high probability of interestingness.) However, for this post, we're talking about the slightly more boring, but prettier, stuff that I did buy. These are them: 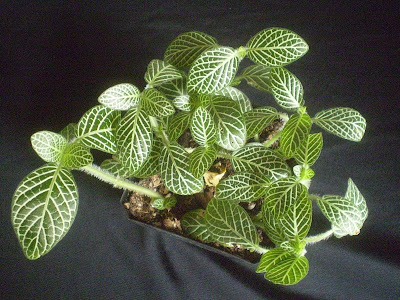 Fittonia albivenis, apparently.
I don't think this was probably a good decision in the long run, but you never know. I like the look of these, and always have, but as we know, I'm not good with plants that don't bounce back if they get a little dry. But it was small and cheap, and in the event that it looks like it's falling apart, a little bit can always be salvaged (maybe) by rooting a cutting in Nina's terrarium, so we're going to try it.

Also, according to davesgarden.com, the correct name is no longer Fittonia argyroneura nor F. verschaffeltii, but is now F. albivenis. We'll see whether I can manage to remember this. It's not as nice-sounding of a name. 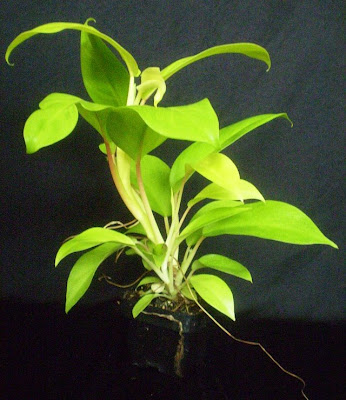 Philodendron 'Golden Emerald.'
Yes, I know what I said, not even that long ago, about not wanting to try this one until I have a better understanding of Philodendrons in general. However, this one was five times less expensive, so I can experiment on it with less risk. Which makes it acceptable.

I saved all my genuinely risky stuff for another plant:

Heliconia psittacorum 'Bright Lights.'
WCW has had one of these before, maybe not 'Bright Lights' but some kind of Heliconia, and had told me about it a long time ago. The only part I remembered was the part where she said that they're really prone to spider mites inside. I asked her about this (she was working on Saturday) and she said that they're not as bad about it as bananas (Musa spp.; Ensete spp.), maybe more along the lines of Strelitzia. Which I've seen mites on Strelitzia before, but not on my plants at home, so I figured success was plausible enough to be worth a try.

Also like Strelitzia are the flowers, kinda, in that they're orange and strange and spiky-angular. Not what I generally think of for "Heliconia." I don't mind, though. If my Strelitzias are never going to flower indoors, and smart money says they won't, I may as well have something kinda sorta similar that does stand a chance of producing flowers. No? 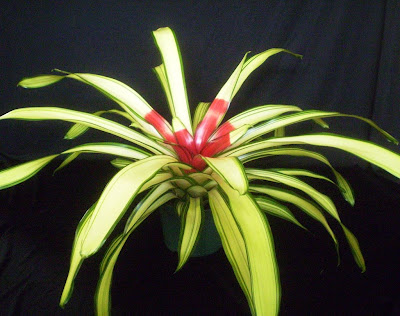 Neoregelia 'Ardie.'
And then there's 'Ardie,' who somehow wound up on my wish list (see sidebar) a while back, and who I never expected to meet in person, but who WCW was so impressed with that she called me at home on Saturday morning to tell me about it. (Some of the other plants got mentions too. But she knows I like Neoregelias.) I'd already been planning to go in, but finding out about this made me really happy about it. 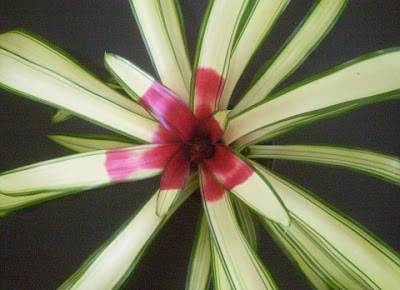 I obviously have all of four days' experience with 'Ardie,' and don't know how it's going to work out between us, but so far, the only Neoregelias that haven't worked well for me are divisions that failed to root. So I think we'll be fine. 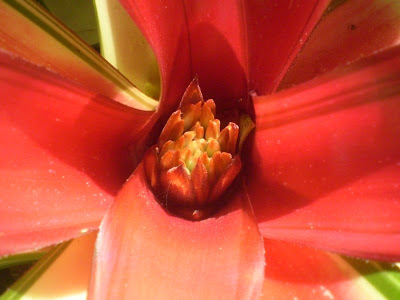 Golden Emerald and Ardie would have gone into my cart too! Neoregelias are long lasting so you'll have great success. And how nice you get dibs on the good stuff coming in!

I have the Fittonia in my future-anole terrarium and it's doing just fabulously, so go for it! (And, er, have you ever considered giving Nina her own blog? Just a thought.) 'Golden Emerald' hates the light in my greenhouse (too bright, apparently) and has spent the entire summer showing me exactly how fast it can turn those gorgeous pale green-yellow leaves to brown. I hope yours does much better in your conditions! Overall, sounds like an excellent haul.

Well, in theory, I already have a second blog (http://pickaplant.blogspot.com/), with which I've been trying to do something useful for a couple years now. It's very hard to find time to figure out what that something useful might be, and then try to write posts for it -- I barely keep up with PATSP as it is -- so at the moment it has no posts. Adding a third blog for Nina, besides being boring (she doesn't actually do that much, you know), would probably just kill me. Why do you want to kill me?

Neoregelia 'Ardie' would have follwed me home too! What a beautiful plant.

Don't worry about Fittonia albivenis. I grew one for years and every now and then I would forget to water it. It would droop miserably but bounce back fairly quickly after I watered it. It was quite interesting to watch and it's possible I may have deprived it of water on purpose at times just to see that, but I'm not confessing. I think your plant will do just fine with your experience.

And I'm in favour of a blog for Nina. That would be so cool!

Particularly struck by the photo of the philodendron.

I'll agree with Water Roots on the Fittonia. I have one at home, grown from cuttings I have... ah... aquired at work, despite being warned it doesn't like getting dry, but so far it's done just fine. And my plants do dry out quite frequently (the odd thing is, in fact, that my Fittonias are doing just fine, while at work we gave up growing them because we could barely keep them alive, let alone looking good!)

How about a weekly post about Nina? That would be much more manageable than a separate blog. Be sure to include pictures!

Concerning the Fittonia, I've had luck taping a square plastic cloche to a similarly shaped pot to create a sort-of wardian case. My Fittonia seems quite happy in this little make-shift terrarium.