Although the husband and I had just been to my ex-workplace last Saturday, and I bought stuff then, I had a rare case of non-buyer's remorse with this particular plant. 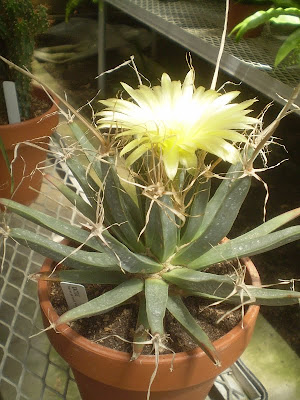 Its name is Leuchtenbergia principis, and its coolness may not be immediately apparent: to the uninformed, it looks just like a somewhat disheveled Agave or Aloe of some sort, one where all the leaf tips have gotten damaged somehow.

But when's the last time you saw an Agave that could do this? 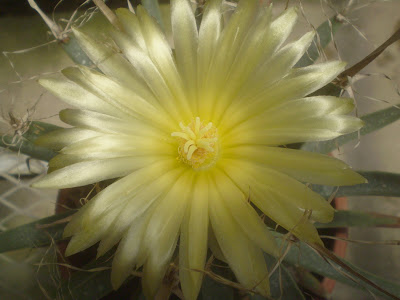 It turns out that this is actually a cactus, and this is an example of convergent evolution, hence the cactus-like flower. The crazy dead bits at the ends of the "leaves" (or what would be leaves if this were an Agave; they're actually just part of the stem like everything else) are what pass for spines. They're not sharp at all. They aren't even stiff; they're roughly the consistency of dried grass. Maybe a little tougher than dried grass.

As plants age, they're supposed to grow a fat, woody stem. The root is said to be thick and "parsnip-like:" for the time being I'm taking everybody's word for that. They're slow growers. I haven't heard much about what they're like to grow inside, but what people have commented have all said that they're fairly easy.

Leuchtenbergia principis is a native North American, from North Central Mexico (also the stomping ground of many Agaves, so perhaps it's less convergent evolution and more peer pressure), and is the only species in the genus Leuchtenbergia. Its closest cactus relatives are in the Ferocactus family, and it can hybridize with Ferocactus to form crosses called Ferobergia, which actually pretty much look like what you would expect, though depending on the particular Ferocactus, you may get things that look more like one parent or the other.

Originally, I wasn't interested so much, but I took a picture anyway, 'cause flowers are pretty. Then I got home and tried to figure out what the plant was, for the picture, and as I read about it I decided that it was cool enough to go back for. At the very least I didn't think I'd ever seen one for sale before. So I called them on Monday and asked them to save it for me, and then picked it up on Wednesday. Which I think was a good call. Right?

I would have passed on this too for it's unkempt appearance. But..OH! that bloom! How long did/will it last?

The Ft. Worth Botanic Garden has one of these in it's cactus house that is about 2 feet tall and looks truly bizarre. You can't get in their cactus house though, you have to look at things through the greenhouse walls, and taking a pic is difficult - but next time I'm over there I'll try to get a pic...

I took the picture of the bloom on Saturday, and by the time I picked it up on Wednesday, it was already over. They told me on Monday when I called that the bloom was starting to fade. So it doesn't last very long.

That would be cool. Davesgarden.com has a few pictures, though most of them don't appear to be any older than my new plant. The one exception is very weird-looking.

What's the point of having a Botanic Garden with a cactus house if the visitors can't get close to the cactus? (Not that I expect you to have an answer. But it's what I'd want to ask them.)

You will never regret this one. Yes, most of the time it is the most unkempt looking thing - like a cactus that's been through the wringer. But the trunk is really neat (takes time to form) and the new growth in the center is fuzzy promise that it is actually still alive. Mine has one large trunk and a smaller offshoot-trunk on one side. I do hope for a flower someday although whether it will happen in Maine is sort of iffy I'm afraid. Flower or no flower I happen to love the weird thing.

Well, that's an interesting question... The Ft. Worth Botanic Garden, like most of Ft. Worth in general, seems to spend a lot of resources pretending that FtW is NOT the beginning of the desert Southwest, even though it is... Their Cactus Garden contains yucca, agaves, and 4 varieties of winter hardy cactus, (even though there are at least 50 that will survive here.) It's about a 20 x 30 space wedged in as an afterthought between the Oak Grove and the Japanese garden. Actually, it's on the edge of the Japanese gardens parking lot. Most of the plants in it are uprooted and laid in the greenhouse to survive the winter bare-root. The cactus house is a standard greenhouse like suburbanites would have in their back yard. There are some impressive potted plants in there, maintained by the Cactus and Succulent Society, and if you want access there's a number you can call to make an appointment.

I've really enjoyed the Ft Worth Botanic gardens for the Japanese garden and the orchids. I guess I've always missed the cactus garden/greenhouse. Sounds very odd though. The Albuquerque botanic garden is relatively new, but it has a wonderful cactus greenhouse, and I got some very nice photos there.

Not sure I've seen anything like this one, but I'm sure if I had I would take photos, I love oddities.

I simply love Leuchtenbergia. It's relatively easy, strange, and it has a beautiful flower. The flower can last up to 5 days, but 2 days is more common. Still, this is more durable than some cactus species, whose flowers last but a single day (or night!).

[commenting back here after reading the article on yellow-blooming plants]