I am extremely pleased to announce the debut of a new blog, Life Among the Leaves, which is written by frequent PATSP commenter, Garden Webber, and all-around fine person Karen715. So go see. Say hello. Compliment her Hedera helix varieties.

I'd also been planning to show pictures of some of my newer plants for a while. I'd held off because a few haven't photographed well (Neoregelia NOID, Phlebodium aureum) and I was hoping for better pictures, but time is short, so we'll just go with the two most recent. The Neoregelia and Phlebodium can catch up later.

This one was first. The husband and I went up to Cedar Rapids a while ago to check Piersons and Frontier and Lowes, which is something we do from time to time, and stopped at an Earl May garden center on impulse. Good thing we did, because I managed to find this cute little Astrophytum ornatum. 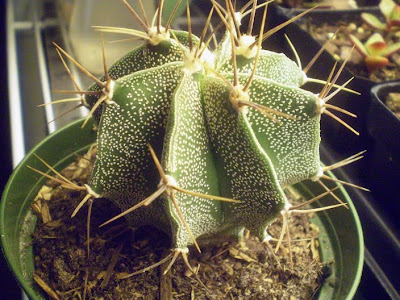 I'm a little nervous around Astrophytums for some reason: I've had an A. myriostigma since December 2007, and it's done okay: not a lot bigger, but it's survived both a very minor mealybug problem and getting repeatedly knocked off a windowsill (until I learned not to put it on the windowsill). For some reason, I'm under the impression that Astrophytums are touchier than most cacti, though that hasn't really been the case with mine, and I'm not sure where I heard this. So I hesitated on buying for a little bit, but it was too cute to pass up. 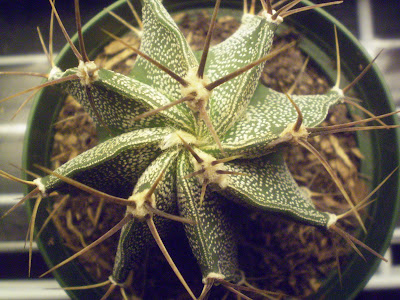 Good thing, too, because I didn't find anything I wanted at any of the other three places.

Next up is the eagerly-anticipated Vriesea ospinae var. gruberi, which I have been excited about since I found out they were on the availability list at my former job. They didn't disappoint, in person: 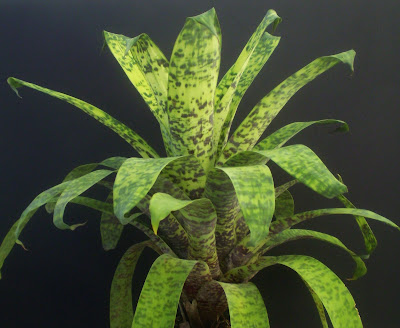 I don't know if they're especially easy or difficult or whatever -- in my experiences with the genus so far, Vriesea seems to have an undeservedly difficult reputation, but I know next to nothing about this particular species and variety, and there's little information on-line, so we'll see. 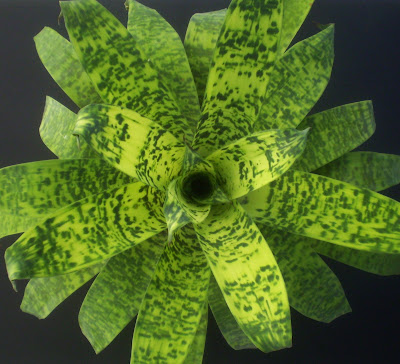 Meanwhile, as I write this, it's Friday, and I have 248 plants yet to check for water, most of which will probably need to be watered, which means bringing them into the kitchen and watering them one at a time in the sink, because it is now too cold to take plants outside and go over them with the garden hose, itself a fairly time-consuming process. We're working on installing a shower in the plant room, so I can water that way, which is how I did it in the apartment, but we're not there yet. So: kitchen sink. Wish me retroactive luck.

Oh, I do like that Vriesea you got! I would never be able to pass that up at a local greenhouse! Enjoy.

Sigh. I've killed more than one Astrophytum in my day, but would buy another in a heartbeat. And I too love the Vriesea. Good luck with the one-by-one watering and rapid shower installation!

Thank you so much for such a prominent mention, and all the kind words. I hope you know I feel the same about you.

Beautiful Vriesia. I've failed with Bromeliads in a major way in the past, and I don't know if I'm ready to try again, but Vriesia is a gorgeous genus.

As for Astrophytums, I've found them mostly trouble-free. I even had an A. asterias come back after it lost virtually all its roots, and it has bloomed for me two years in a row. I did lose one, an A. myriostigma, this year when I put it outside. It got sunburned and probably got too much water as well.

Adorable cactus! It's a shame they are painfully slow growing, good for those glass pendants with living cacti, though.