A new tropical order arrived on Sunday where I used to work, so the husband and I went to look at the new stuff on Monday. I did buy one plant (Vriesea ospinae var. gruberi), which will have to get a post of its own later, but this post is about the three interesting plants I didn't buy. (I may eventually decide that I can't live without one of them: we're still evaluating.)

The one that might call me back is Anthurium podophyllum. It's a total geek plant, in that it wouldn't stand out as special to most customers. It would, though, be one of the first things you're drawn to if you are jaded with the usual houseplants and are looking for something new and different: 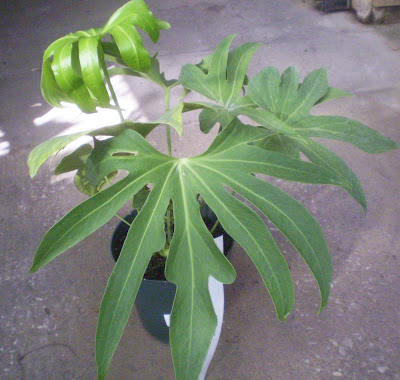 At this point, I hesitate to buy mostly because this would take most of my remaining money, and it seems sort of risky. I love the whole Anthurium genus, but that's mostly because I get along really well with A. andraeanum: when I've tried other plants, the results have been a lot more inconclusive (A. "hookeri" lives, but isn't getting enough light; A. crystallinum 'Mehani' and I have had watering issues. Even some of the A. andraeanums have fallen apart after being repotted.). So we will have to see what happens.

Bachelor Number Two was tagged Philodendron 'Cheesecake,' though it was pretty obviously a Monstera deliciosa, not a Philodendron. (This might not be as obvious from the picture: the lighting was awful, and I see I didn't really include the one fully-split leaf in the photo like I thought I had. You may have to just trust me on this.) It didn't appeal to me so much: they're handsome plants, but I already have a Monstera at home which is extremely overgrown. It's all but pulled down the stake I put in the pot for it to climb on, and even before that happened it was very awkward to move or water or do anything with. Perhaps if I had a hanging basket for it. So until I figure out how to handle the one I've got, I'm not going to get more. 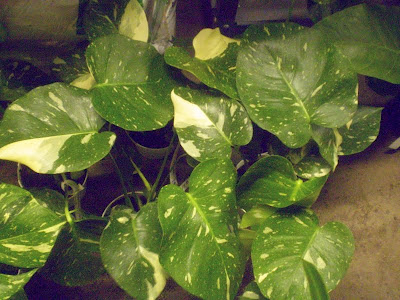 "Philodendron 'Cheesecake,'" which is actually a variegated Monstera deliciosa.

That said, I never expected to see a variegated Monstera for sale, here or anywhere else, and the price was pretty good, so I'm still a little tempted.

Finally, we had Aechmea 'Blue Tango,' which looks very similar to 'Del Mar' but has less white in its inflorescence -- 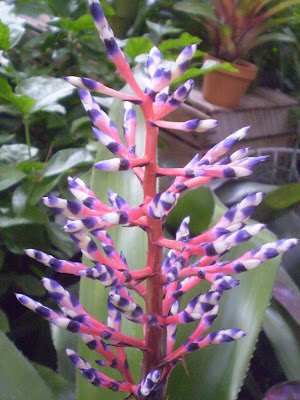 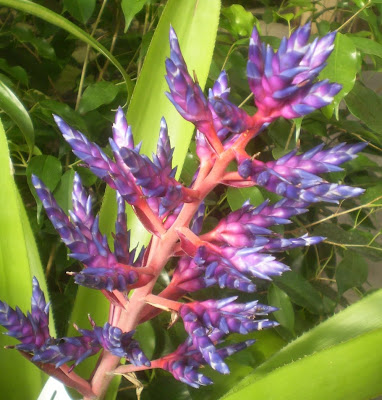 I have to say, I was sort of ennh, whatever when I was actually in the greenhouse, but when I got home and looked closely at the pictures, I was impressed. This is a pretty inflorescence. It might even count as gorgeous. 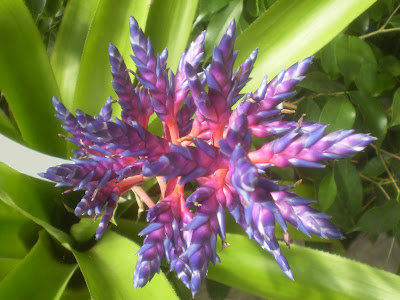 It was, unfortunately, also $70, which would have been too pricey even if I had money, and also there's the matter of me already having a very similar plant (which is doing nicely, thanks for asking). So I left it. But daaaaaaaaamn.

Coming soonish: the plants I actually have bought recently.

Well, I don't do so well with houseplants, but I might have to have one called "cheesecake."

The second one would fool me. And the third one.... gorgeous indeed!

The Aechmea is gorgeous, but $70 dollars for a houseplant that's near the end of its life cycle and may or may not offset for you? I wouldn't.

The "cheesecake" plant is more likely to be Epipremnum aureum.
http://www.lapshin.org/cultivar/N40/ein-e.htm
http://www.natureloveyou.sg/Epipremnum%20aureum/Main.html

I don't think it'd be much of a gamble, really. I have an Aechmea fasciata that bloomed sometime before August 2006, which is still alive and offsetting, and I've had my Aechmea 'Del Mar' for a year on Sunday, and it's still doing fine. So "near the end of its life cycle," maybe, but that doesn't mean it's not still going to hang around for a long time.

And both Aechmeas have offset a lot: the fasciata has produced four (and would probably make more than that if I would take off the one big one it's got now), and the 'Del Mar' has offset six times and isn't necessarily done yet. So I'd be shocked if 'Blue Tango' didn't offset. It's probably worth the money. I just don't have the space or the money, and already own something similar.

They had way long petioles and the beginnings of thick aerial roots, though, all on cuttings with only two or three leaves per cutting. I'm about 90% sure it's Monstera, not Epipremnum.

I was also going to say the Monstera looks an awful lot like an Epipremnum with mature foliage, (which does include splits) but I trust your judgment, especially since you wrote such a fabulous post about how to tell an Epipremnum from a Philodendron

And there are more than a couple of variegated Monsteras out there.

Bach. #2 looks EXACTLY like the plant I have right here on my desktop...which I always did think was a philodendron...Huh! I'll take your word for it though.
Cool colors on the Aechmea!

Hmmm...can't wait to see what you DID purchase.

Your plant very probably is pothos, Epipremnum aureum, which is also not a Philodendron but gets called one a lot. I'm realizing that among the things I neglected when taking pictures of that plant is an object to show the scale of the leaves.

It would also have been good of me to get a shot from the side, to show the aerial roots and long petioles, and something approximating daylight would no doubt have been useful too. I'll see if I can get back sometime soon; maybe I can run an unfinished business post later that includes better pictures.