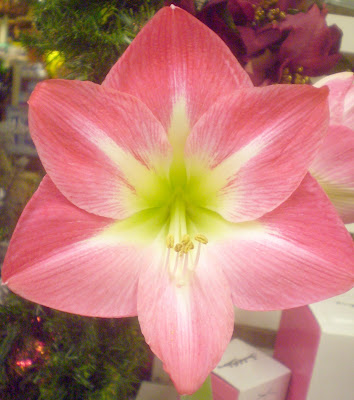 I think this may be the first Hippeastrum picture I've posted here, in the two years I've been doing this. I don't have an explanation for the omission exactly, though I'm sure part of it is that any blooming Hippeastrums while I was working in the greenhouse tended not to stick around long enough to be photographed. Plus, Hippeastrum season coincides with poinsettia season, and I tended to be more focused on the points because there were a lot more of them, and they were more needy.

I'm particularly stricken (struck? strucken?) by the range in bulb prices for amaryllis. The ones where I used to work start very high (I forget if it was $17, $19, or $21, but whichever it was, that's a lot for a bulb), and get insane (the one in the picture is $31 -- though that includes a fairly nice pot). On the other hand, you can buy some at Lowe's for a fraction of that (I didn't actually price them this year, but my memory from previous years is that they were running about $4-6). They can't really vary that much in quality, can they?

I suppose one of these years I will have to do this; I know enough indoor gardeners who like them (including, but not limited to, Karen715) that I figure there must be something worthwhile there. Perhaps if I can find some on clearance or something.

we used to get at least one of these for a gift every year around Christmas... they're a nice gift. Here in TX, we just wit till spring and plant them outside after they bloom... There's one out there that's been there for over 10 years... they do real good if you can keep the cutworms at bay...

That's a very pretty picture. I really like these plants. I buy a bulb or two every year at a reasonable price (between 4 - 7 dollars). I enjoy watching them grow and bloom. The blooms are especially welcome this time of year when the outdoors looks so drab.

I paid $17 for mine. The quality does vary. The $6 ones have one bloom stalk. Each of the more expensive ones I bought has 2 stalks to start, with another coming on. Amazing that all those blooms are contained in a single bulb, isn't it?

I think I'd like them better if they were more fragrant. All those big gorgeous blossoms and no smell? That usually leaves me a little disappointed.

Took me a long time to warm up to amaryllis, Mr. S., but now I'm hooked. Thank heavens a friend passed along a bunch of bulbs as a birthday present this year, so I don't have to succumb to amaryllis-bulb hysteria...

As Nell Jean said, the quality does vary, though I think $31 is very high. The $5 bulbs sold by box stores and discount retailers tend to be three basic varieties: 'Apple Blossom'(pink & white); 'Minerva' (red & white); or 'Red Lion'(red.) Occasionally, you will come across a plain white variety as well. These are all beautiful, but they are ubiquitous--the pothos of the Amaryllis trade. If you want something different, it's gonna cost you. Cheaper bulbs tend to be on the small side, and as Nell Jean said, produce fewer bloom stalks. There are exceptions--I've gotten large bulbs and multi-blooms from box store bulbs, and small single bloomers from nurseries.

Thanks for the link!

I just realized Hippeastrums were among my very first plants - I know there was one in my room when I was still in primary school. I'm fighting the urge to collect them - not allowing myself more than one bulb a year.

I cannot imagine paying $30 for a 'Red Lion', 'Appleblossom' or 'Minerva' (not that there's anything wrong with them), but the really exquisite types are worth the extra cost. I'm presently enjoying my first-opened 'Evergreen' (Google for image). Bred from the exotic cybister species, the blossoms are so fine, they're 'a 'situation'!

I meant to add that that is a very pretty Hippeastrum indeed. Could it be 'Pink Impression'?

I checked at work today and ours range from $13 ('Apple Blossom' 'Minerva' 'Red Lion' etc) to about $20 for bareroot, potted would basically be a little bit more than whatever the bulb would be.

I'm trying out 'Black Pearl' which was around $15 I think and has two flower stalks.

I've only ever seen the 'basic three' in boxes, but I've seen varieties like Black Peal, Neon Pink (or some other name), and a bright green variety (Evergreen?) for $9 a bulb. Good size too.

Be careful because they're addictive. When I had more than three that was when I had to spin off a blog all of their own.

Those prices are crazy. Normally I'd recommend the after season sale at Target, but since Smith & Hawken folded this year I don't know how it has affected the bulbs there this year since I haven't been to Target yet. Usually their "nice" varieties are priced so high people don't buy them and you can get them clearance.