These are from my ex-job, though my personal plant at home has also produced a small cluster of about five berries. The plant at home is behind the one at work by at least a few weeks, though, so its berries are still white or very light pink.

The plant at work has been around forever; I don't think it was there when I started working there (now over two years ago), but it must surely have started not long after that. Originally we got maybe four individual plants, in 4-inch pots, and those were moved up into 6-inch, where they lived happily for a long time before finally beginning to bloom last July. At some point between July and December, the three remaining 6-inch pots were potted together into one big one, which is the plant in the photo. 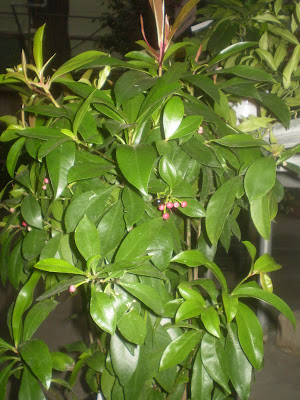 I'm actually really shocked that this hasn't sold yet; they have a pretty inexpensive price on it (inexpensive relatively speaking, at least), it's full and bushy, the new growth is coming in red, and now there are the decorative-seeming pink and black berries. It seems like it would be appealing to customers. (I'm half tempted to buy it myself, actually, even though I already have one.) But you know how customers can be, pearls before swine, and all that. 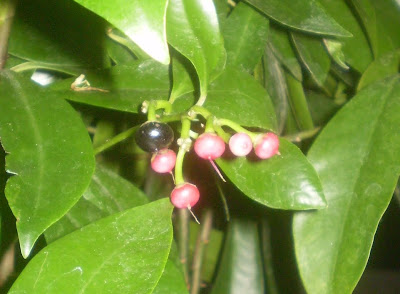 If it doesn't wind up selling, it'll be interesting to watch their development: I have no idea how long it takes Ardisia elliptica to produce berries, nor, for that matter, what one is supposed to do with the berries once they appear, or whether the plant continues to produce them, or etc. Hopefully, between the one at work and the one at home, I'll be able to figure something out. It might be fun, raising Ardisia elliptica from seed.

Why is this not a more popular houseplant? Ardisia crenata, too, for that matter. I don't get it.

My co-worker was gifted an ardisia elliptica last year that's still fairly young I think (http://davesgarden.com/guides/pf/showimage/217479/). I love how it looks but I can't find it in any of the garden stores around here (Toronto, Canada).

How do you propagate this by cuttings? Is it the same way you would propagate a dracaena marginata, for example? Would it re-sprout from the cut area?

The one time I did it, I just took a piece off the top a few inches long and stuck it in water until it rooted, which didn't take much time. The stem did resprout, though only just barely: I think it's getting shaded out by the other plants in the pot.

Hey Mr. S! Any updates on this plant? Has it survived the various purgings that have been going on lately?

The one in this post wasn't my plant; it was at the ex-job.

My original plant, and the seedlings from it, were both purged due to scale quite a while ago.