Well, I said I'd get better pictures of the flowers than I did of the buds (last Thursday), and I think I was successful. A couple of these turned out really, really well, in fact, or at least better than I was expecting. The first two pictures were taken using the flash on the camera; the others used natural light. I can't really tell the difference, as far as the quality of the pictures goes. 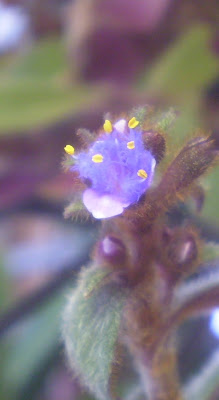 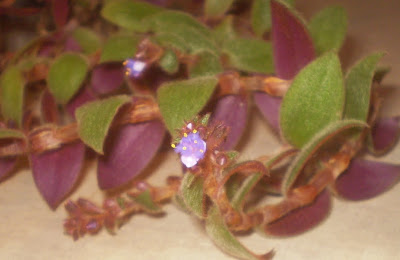 The flowers are not especially long-lasting, and on dark days, I don't think any of them bother to open at all, but considering that flowers are pretty much just a bonus, not really the reason for growing the plant, I'm satisfied. 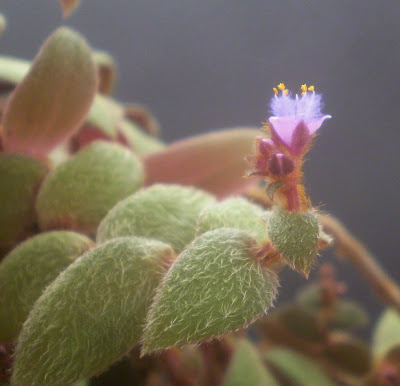 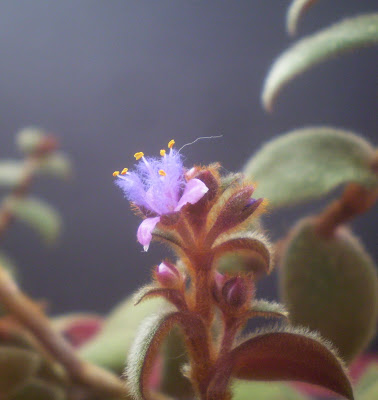 The color doesn't come out quite right in the photos, by the way. I mean, the pictures are closer to reality than I was expecting them to be (particularly the first picture), but the real flowers are a strange glowy, possibly fluorescent, purple that I really like. It doesn't exactly go very well with the rest of the plant (glowy purple plus olive green plus brown? Ew. . . .), but I try not to think about that. 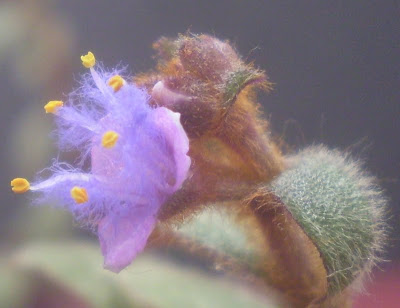 Cyanotis kewensis is in the Commelinaceae, a family which has given us several other houseplants (Tradescantia pallida, Tradescantia sillamontana, Tradescantia spathacea, Tradescantia zebrina, Gibasis geniculata, Siderasis fuscata, and Callisia fragrans, among others) and outdoor plants, plus a few weeds (Commelina communis being the main one). The family shares the same basic flower structure, though the color varies from species to species, and not all of the flowers look so much like feather boas. 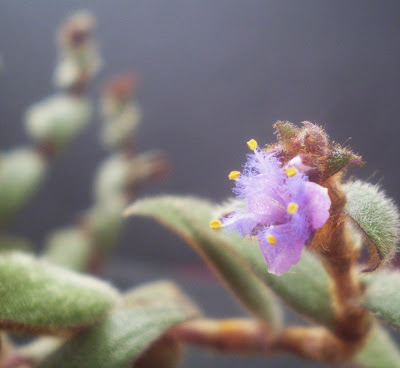 I've found mine to be somewhat difficult to get going; I've tried starting cuttings in the mini-greenhouse, with partial success, and in Nina's terrarium, with no success. Once established, it seems to be relatively easy. I get the feeling it would be happier in a higher-humidity environment.

I just noticed your tweet about being jealous of DC -- and well you should be! We had 17" before I went to bed last night. It was fabulous! Except for venturing out with hot water for the bird bath and filling the bird feeder, I was snug and warm. Spent all day watching "The Music Man" in honor of my favorite blogging Iowan, with many breaks for naps and meals and more naps. Wish you were here -- it's still coming down!

I really like those little flowers. They're just so feathery...

I'm curious - do they feel as soft as they look?

That could probably be arranged.

I don't know. I didn't try touching them before (in person, they're almost too small to notice any kind of texture), and it's a dark day outside here (got an inch or two of snow, though) so there aren't any open to check.

The leaves feel fairly soft and fuzzy (similar to Gynura aurantiaca), though, even if the flowers don't.

That is just an incredible combination of textures and elements. So softly feminine, and intricate. Beautiful!

Mr. Subjective- thanks for the postitive ID on my 3 petal flower blooming Tradescantia sillamontana! Your feather boa blooms here, and some of the other similar plants with longer leaves had me thrown off, for sure! Good to know that is REALLY what I have!
Happy Christmas to you!

Those are gorgeous photos! Thanks for sharing.