We had an ice storm on Wednesday, which I'd been looking forward to, but then I spent the last several hours of Wednesday without the internet, which made it suck anyway. I'm having terrible luck with weather this year. The blizzard was not a particularly good storm, plus it led to the plant room panic, and now the ice storm (which was okay, not the best ice storm ever, but not terrible) knocks out the internet for several hours. It's as if bad weather can be inconvenient even when you don't go anywhere or do anything. How is that fair?

We also lost the telephone (We have a landline. The husband also has a cell, but it frightens and angers me in a caveman-encountering-fire kind of way, so I rarely use it.), which is a little scary -- suppose we'd been relying on just the landline, and needed to call 911? Is this a plot by the cell phone companies to slowly kill off all the people who rely solely on their landlines?

But anyway. Which all means that I spent most of yesterday catching up on the internet, and boy was there a lot to catch up on. Among other things, there's DRAMA! at Garden Web. And then also for some reason I spent a lot of time monitor-shopping (browser-shopping? What's the internet equivalent of window-shopping?) at Glasshouse Works, because the husband made me do my taxes (long story), so now I know I have money coming to me at some point and want to spend it. (There's nothing in particular at GHW that I have to have, but I am very intrigued by Dyckia velascana. As well as twenty or thirty other things. Though I will probably not buy all of them, and may not buy any of them.) And what I should have been doing during all that time was watering plants, because . . . on any given day, the odds are about 4 out of 5 that I should be watering plants at some point during it.

Anyway. All of the above is to explain to you why I don't have anything better to show you, post-wise, than just an unfurling Cyrtomium falcatum frond. Though it's a very nice frond. Probably better full-sized, by the way. 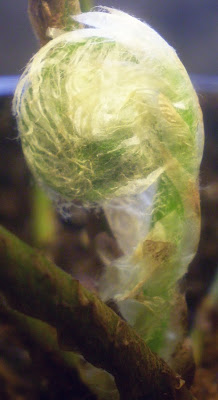 So we've got this today, we'll do a Nina picture tomorrow, and then I'll be back on track. I have a particularly weird Nina picture in mind. It should be a big hit with everybody.

You are such a tease! Drama at GardenWeb, but no hyperlink? So of course I hied myself over there and snooped around on the House Plants forum. But there are 396 matches for posts by you. And none that I could find (before I gave up) that were even posted this year. Ditto on a search of all the forums.

But you did post a hyperlink to GHW, which makes me wonder if they slipped you a little something under the table (or potting bench).

Oooh, I want to know the drama! What happened?

What about the drama at Dave's Garden? I love the unfurling frond--it's so hopeful!

I'm still counting the cost of the below freezing temps here whilst I was away. But several survived that surprised me (in a good way). My phone is out at the moment and I know how you feel.

Ah, nice to see someone else who loves a good storm, nicer still when we don't have to go out in it. We were under tornado warnings last night, odd for January, and I was ready with the flashlight but the only thing that happened was that the HD satellite went out. Having to watch TV on regular definition was soooo sad. We could not see every wrinkle and blemish and pock mark on the news guys and gals, bummer. Love the little furry frondy-poo.
Frances

As far as you impending tax income, you could always see if there is an orchid show coming up in your area like this one:

Uh-oh. There's no way that's going to be a good thing for the ol' finances. Or for having free space in the house.

Oh and I forgot to mention, though hopefully it won't be too far for you to travel, there is also a show