I guess the Salvia elegans cuttings are maybe getting confused by the shop lights they're under, because I'm noticing several of them beginning to flower. Or possibly they made up their minds to flower when they were water-rooting on the kitchen windowsill, and since they were already committed to it, they're doing it even though they're under lights. 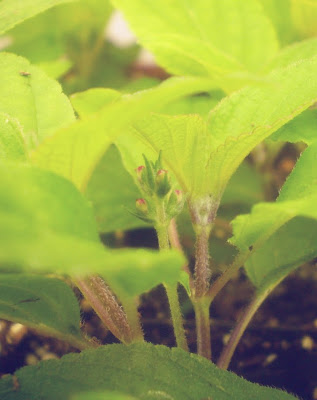 This probably works better when opened full-size in its own window.
In any case. They're short-day plants, and the lights are on from 6 AM to 10 PM, so something isn't adding up properly. I've seen people saying elsewhere on the internet that they'll start blooming around August, and continue through the winter if they're in a greenhouse, which presumably is what's happening, except -- they should think it's summer now, shouldn't they? I mean, if they're getting sixteen hours of light per day and all.

Wev. In any case, I now have forty-three three-inch plants from cuttings living in my office, plus the parent plant (which lives in the basement, since it's too big for the office), and I'm in the process of making even more. The idea is to sell or trade them in the spring. A lot of times when I go in or out of the office, I wind up running my hands through them just to get a whiff of the smell. I don't use the word "delightful" very often (at least, not unironically), but it's a delightful plant.

Just as soon as I get through the Phalaenopsis profile, I'm starting on one for Salvia elegans. Let's hope it's easier, 'cause Phalaenopsis is turning out to be a huge pain.

Yes, I'd be interested in a profile of Salvia elegans. Now that you've intrigued me, I'll have to look it up. When you say 'delightful', is it delightful in the typically sagey way, or is there something extra-special about it?

Mostly it's delightful because of the scent (which really is pretty close to pineapple, though if you're really rough with the leaves for a long time, it starts to smell like pineapple and sage at the same time, which is kind of . . . not unpleasant, but definitely pretty odd), but it also grows fast, propagates well, flowers, and has a nice leaf color.

I've read somewhere on-line that the flowers are scented, but they didn't describe it. I kind of doubt it: the parent plant flowered a few months ago, and I don't recall there being any smell associated with the flowers specifically.

Perhaps one of your lists should be plants people who can't smell (anosmia) shouldn't bother with and perhaps vice versa. I mean, if even you normal people can't grow a gardenia... And a rotting-flesh scent sounds like a great guardplant to me!

Hi Mr. Sub, way to go with the Salvia. We have taken cuttings of ours with gold foliage and have a post ready for next week about how to do it. They root so easily it is nearly criminal. But truly a delightful plant, a word I use over and over. :-)
Frances