After the previous post where I noticed that my chartreuse peace lily was sprouting, I decided to fertilize it, as a reward for, you know, doing something. So then it almost immediately decided to reward me for rewarding it by growing flowers, three or four of them. Which means that I now have to, somehow, reward it for rewarding me for rewarding it. I don't see this ending well. 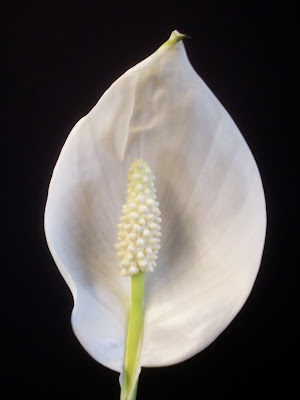 I don't know for sure what variety this is. I've been calling it 'Golden Glow,' which is the chartreuse Spathiphyllum that Asiatica sells, because that's the only chartreuse variety I know the name of, but it wasn't tagged when I bought it, and there's a good chance that it's probably not actually 'Golden Glow.'

Whatever it is, I've only ever seen them one place (Frontier, in Cedar Rapids), and even Frontier only had them on one occasion. A lot of people don't like the chartreuse plants (it takes a while to get used to the idea that this is the normal foliage color, and not chlorosis), which might explain why they aren't more commonly available. It's been a perfectly well-behaved plant, though (we've had problems, but they've all been on my end, mostly me letting it dry out too much), and I've had it for one month shy of three years. This is, I think, the first reblooming in that three years, but if it's as simple as fertilizing -- which appears to be the case -- then I think we'll be seeing more of these flowers in the future.

Chartreuse week continues at PATSP tomorrow, with a list of chartreuse/yellow/yellow-green foliage plants.

My favorite Spath is 'Domino'. But it can look ratty if it doesn't get watered regularly.

By the way, how often do you expect your spath, if cared for "properly" (whatever that means), to bloom? I've heard it only blooms once a season. How a seasonless house works into that I don't know.

I've also heard that they actually bloom when they're feeling stressed and see the need to get their seeds out there before they die. Got any ideas?

Several years ago I gave a spath to my son, who loves them partly because Simon Pegg had one in the movie Hot Fuzz. He promptly named his Simon, and it's been doing well. I think he lent it to a friend while he's in Ottawa, as he couldn't see stuffing it in his checked luggage and you KNOW what security peeps would have thought had he put it in his carryon.

Well, I don't personally expect my spaths to do much of anything except grow leaves and not die, but I think if I were trying for flowers, I could probably get them off and on for most of the year. Supposedly spath "season" is January to September, or something like that. (However: any given cultivar has a specific ancestry, which is different from other varieties and may mean a different bloom period. So Jan-Sep may not apply to all spaths equally.)

Some plants do bloom when they're feeling stressed, but I don't think all plants are even capable of this, and the ones that are probably don't do it very often. It is fairly close to suicide, after all.

I'm kind of torn about 'Domino.' I like the variegation, but the leaf texture weirds me out, more often than not. Asiatica has a variety with coarser, blotchier white patches and a non-bumpy leaf surface, they say. (I can't remember the variety name.) I'm kind of intrigued by this, though I can't afford Asiatica now, and remain kind of mad at them, so I'm not going to be checking that out anytime soon.

I used have a Spath that I named Shirley Temple because she was the biggest actress in the house. She would get a tiny bit thirsty and collapse, leaf to her forehead, and squeak out, "I'm going to die," before drooping even further.

Whatever. I took her to the doorstep of a retirement facility and left her there. Dumbass bitch.

Hey this is an older post but I just ran into it. I have a plant that I purchased as Spathiphyllum 'Golden Glow' from Asiatica last fall. I have been growing it in hydroculture (a riparium) and it has done just fine, but I haven't seen any spathes yet. I have it under moderately-bright fluorescent lighting and it is more of a lime green color than yellow, but it contrasts nicely enough with some similar-sized neighboring spaths to make a nice accent.

I wonder if there might be another yellowish spath possibility(?). Last fall at the IAS show there were a couple of potted plants labelled as 'Golden'. They were larger than my plant and also only slightly yellow in coloration.

That 'City of Angels' looks intriguing. You know the catalog description claims that it does not have that warted leaf texture of 'Domino', but the picture sort of has that appearance(?).

I wish I could find sources for species Spathiphyllum. I think that there might be more intriguing possibilities than what is available among commercial cultivars. I have heard of (but not seen) a spath with finer almost grass-like leaves, a spath with a purple spathe and a fully-aquatic spath. I wonder why such plants have never gotten into cultivation(?).

Any other varietals of Spathiphyllums in the CR area? I've got several but love looking for others.

If you're a serious collector, you're probably better off going mail-order, but Frontier Garden Center (Cedar Rapids) has had this one, plus the silvery-gray variety, in the past, and might be able to get them in again. Pleasant Valley (Iowa City) has 'Domino' now, plus also a NOID large-leaf variety that's a good five feet tall or so, though the price on it is high ($100, I believe). Pierson's usually has some of the big huge varieties at any given moment too. No idea what price they put on them, though.

I'll be going to Wallace's (Bettendorf) next weekend; if they have anything interesting there peace-lily-wise I'll try to post something about it.