Yesterday, I "should" have stayed home and worked on writing stuff, but I didn't want to. The husband didn't especially want to do whatever it was he was supposed to do either, so we googled for "greenhouse Burlington IA," or something like that, and then took a road trip to Burlington and Mount Pleasant.

In Mount Pleasant, we found a garden center that was going out of business, and so I scored a couple years' worth of Osmocote 14-14-14 fertilizer at half-price. In retrospect, I should probably have grabbed all their vermiculite and perlite too, but it seemed . . . greedy? at the time? But now I wish I had. Ah, well.

In Burlington, we went to two garden centers, and I took this photo at Zaiser's Florist and Greenhouse, who were very nice, and answered questions for me about how old the greenhouse was (built in 1950, and remarkably well-maintained) and other stuff relating to the business. Which was very nice of them. We'll be back at some point in the spring. 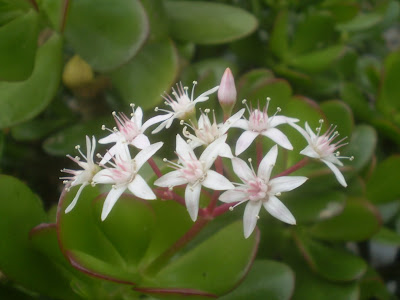 Zaiser's also had a blooming Crassula ovata, which I don't think I've seen in person before. It turns out that they look pretty much the same in real life as they do in the pictures, but it's nice to know this as fact, not theory.

Wow, pretty flowers - pretty enough to reconcile me to Crassula ovata (which, IMO, have always been stupid, ugly, top-heavy things that kept toppling over when dry and rotting when watered. I don't want to know how many of them I've had to fish out from under tables because they fell off.)

I noticed a Crassula ovata blooming yesterday in a greenhouse too. Mine has flowered exactly once in the many years I've had it, if I remember correctly. Not enough sunlight for it, except in summer when it goes outside for a couple of months, but I love my big ol' plant.

Those are very pretty flowers. I've never seen these plants bloom. That was a nice trip you took. Once in awhile, it's nice to ditch whatever you should be doing and just get away.

Yup, one of my jade plants is now covered with these beautiful starry clusters. I credit it to lots of sun and benign neglect. Good for you for getting out and about! There's nothing like seeing tons of plants in winter to boost the snowbound spirits (trips to Parkside Orchids and the Allentown Flower Show are in the works for us), but oh, woe to the pocketbook!

It wasn't actually too rough on the pocketbook; neither Zaiser's nor the other place we went in Burlington had much of anything to look at, in the way of houseplants. (And the other place was overpriced to the point of self-parody: $47.50 for a 6-inch Anthurium? And you get people to pay that? Really?) Zaiser's had stuff, but a lot of it was unpriced, and there wasn't anything there I was especially interested in anyway.

So aside from the money for gas, it was a fairly cheap trip, and now I have fertilizer until the end of time, so a fairly successful trip overall. I also just called Mom and asked her to go ahead and buy the place in Mount Pleasant out of perlite and vermiculite for me. (You can never have too much perlite and vermiculite.) So that works out too.

Awesome! I live in Mount Pleasant--not the same one, of course, but just to say.

Those flowers are truly pretty. Maybe mine will flower in a few years. :P

It's sad to hear another garden center is going out of business. But it's cool to get half-priced loot!

Wow, what a stunning picture! The flowers are very pretty.
Ah, how I wish my boyfriend would agree to go visit greenhouses as readily.

The Crassula ovata gets a bit of a bad rap here in the Bay Area. But I love them, and one of numerous reason we moved to San Francisco. It is always magical to walk down the city streets and see jade with trunks the size of your forearm.