Some Kalanchoes, like K. tomentosa, K. orgyalis, and K. bracteata, are able to produce a new plant from a single leaf, and I've seen this process get started any number of times and then abruptly fall to pieces. And most of the Kalanchoes I've had (the above three, plus gastonis-bonnieri, luciae, and beharensis) don't get along that well with me anyway, for one reason or another. So I'm trying not to hope for too much here, but this leaf got broken off of the original plant some time back, and I figured it was worth a shot to try to propagate, and so far here's what we have: 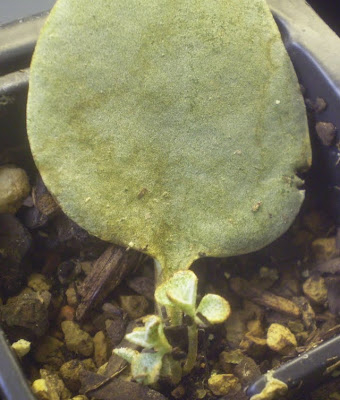 There are also a few baby plants in the pot with the original, also from dropped or broken leaves, which will (I hope) go on even if this one doesn't. It's a nice enough plant. In fact, considering how I've historically gotten on with Kalanchoes, which have a tendency to die of Teh Ugly, it's a fucking amazing plant. We'll see how it works out. 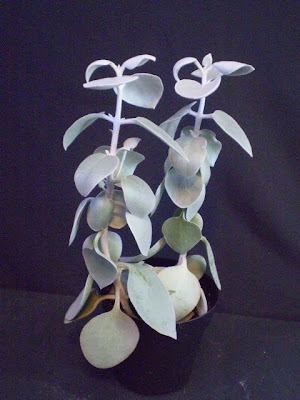 The parent Kalanchoe hildebrandtii bracteata 'Silver Teaspoons,' some time ago.
Posted by mr_subjunctive at 2:30 AM

Brilliant stuff! I stuck a leaf off my Kalanchoe pumila just in the garden bed and it's taken off!

Ah this is a good idea, I'll try to sprout some kalanchoes using the leaf method. A nursery helper told me that the flowers will self seed or grow from the parent plant. Their roots are not deep anyway, so if the pot is wide enough, you will also see little plants around the circumference of the parent plant besides the usual sprouting from the sides of stems. My kalanchoes need watering everyday on well drained soil medium. However, I must be very careful not to overwater as this is the no. 1 cause of death.

If I carefully cut off all the spent flowers, the kalanchoe will bloom again.

Hey, this is great! thanks for the reminder of how easy it is to propagate these plants. I remember once going into the back room of a nursery and seeing trays and trays full of jade plant leaves embedded in the soil. I was impressed by the nursery owners resourcefulness.