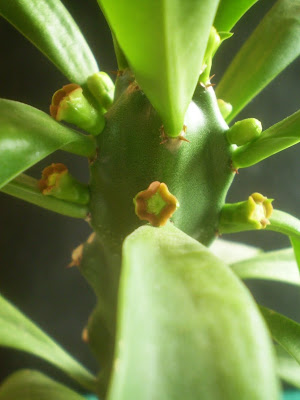 Ancient PATSPians celebrated the blooming of the Euphorbia drupifera with feasts of frozen pizzas and rum-and-cokes, followed by live cricket sacrifices offered to the Anole god, Ninahuatetl. Then they watched TV. According to legend, the five brown petals (bracts?) of the Euphorbia flower represent the five shitty commercial network TV stations of the ancient PATSP civilization (ABC, NBC, CBS, Fox, and Paramount/WB/CW/"other"), and the paired thorns below each leaf refer to "rabbit ears," or "antennas," which were stick-like devices made of metal which attached to the television set, probably as part of a ritual to increase crop and livestock fertility (nobody really knows, though).

The exact date of Drupifera's Day moves around the calendar, but typically happens in the second half of January or the first half of February. We're fairly traditional observers here, though we substitute Dr. Pepper for Coke. Because I like it better. And also we skip the turtle-curling, for animal-cruelty reasons, and also because it's usually cold outside.

Har har har... Loved this post. Thanks for the laugh!

That cracked me up, too!

Interesting looking plant. Your posts are always good for a laugh.

You nearly made me spit my cake all over my monitor!
Guess I needed a laugh, too, after drooling over plants I can't afford at all right now (I can spend €0.88/day for the rest of the month.) Who knew Euphorbia flowers could be so symbolic?

Amusing post! (But shouldn't it be the " Anole goddess, Ninahuatetl"?)

Well, now that you mention it, yeah. It probably should be goddess.