Last Wednesday, I went back to the place where I used to work to try to find a micronutrient supplement, specifically something with iron in it. The reasons for this are long and complex and not really pertinent to the post.

This would have been a little risky even under normal circumstances, but for other complex and non-pertinent reasons, I also had basically two hours to kill while there. So naturally I wound up buying stuff, including this Davallia: 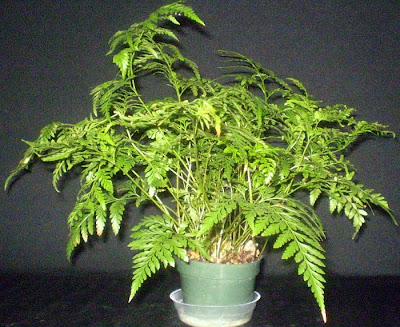 Davallia fejeensis 'Major.'
Which, okay, it's not like I didn't already have two other Davallias -- 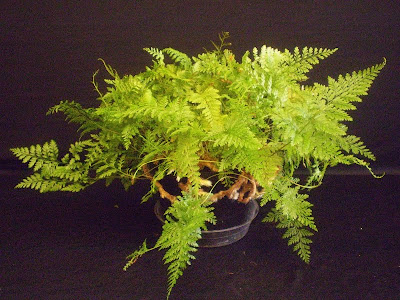 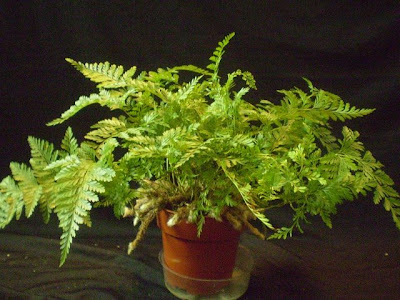 (Is D. fejeensis 'Major' particularly different from the others I had? Well, the fronds are larger, and the plant as a whole seems less compact. Whether this is significant or not depends on one's expectations, I suppose, but it's different enough that I don't think I'm in any danger of forgetting which of the three Davallias is which. So . . . different enough.)

I also bought two Begonia leaves, to try to propagate from, and we'll see how that works out for me. But I walked away from a Ficus benjamina I'd never seen before, and then bought it yesterday (Sunday), because looking at this picture made me think, gosh, I think I want one of those. 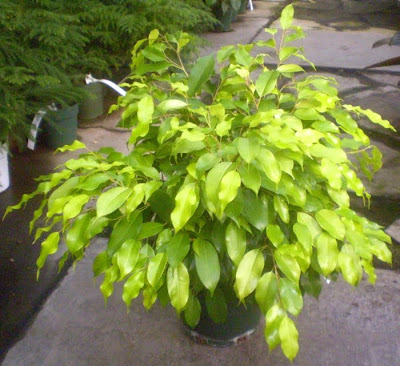 One weird thing about the plant: it's apparently "supposed to" have chartreuse/yellow leaves with a darker green center (basically the opposite of 'Black Diamond,' which is very dark green with lighter green centers), but the plant I bought seems to have lost that variegation. Which is fine. 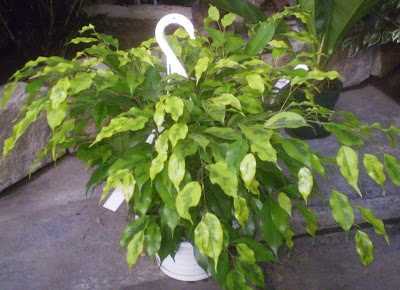 The original plant, with the original variegation, albeit not a particularly clear picture of it.
Both of these were tagged "Ficus - Margo," which is not especially helpful. An internet search for this turned up mainly articles about a nursery called Margo Nursery Farms, which has patented something it calls Ficus benjamina 'Golden King,' which from the name you'd think it would be yellowish, but it is in fact a disappointingly ordinary-looking variegated plant. The leaf margins are yellow, but most of the leaf is green, so this is not the ficus we're looking for. I think this is actually probably Ficus benjamina 'Margarita,' which according to the (linked) patent application was a mutation of 'Midnight.'

I'm not necessarily a huge Ficus benjamina fan, but 'Midnight' and I are getting along well lately, and the contrast I imagine in my head between the solid-yellow plant and 'Midnight' is quite striking. Plus I like the chartreuse/yellow plants anyway. And it's interesting to me that the two varieties are that closely related. So basically I went back four days after first seeing it and bought it because I'm hoping the two of them will enjoy seeing one another and play nicely together and all that.

This post was sort of hastily edited last night to change 'Margarita' from a walkaway to a new plant; I have seen some interesting actual walkaways recently, and will have to get to a post about those at some point in the nearish future.

It seems odd that a ficus would be put in a hanging basket, as it is in the second picture.

Ficas benjamina is very sensitive. Myself, I have not been able to successfully get them to grow when I lived in the Midwest. RE the lost variegated. do you think it is possible that it is not getting enough sunlight to maintain the variegation?
matti

Thank you Ginny, I thought that was strange, too. Why is it in a hanging basket? Sure is pretty though.

I know. Tell me about it. The weird thing is that people keep doing this even though they don't sell this way. When I still worked there, we got a different variety in in hanging baskets once (I think 'Starlite?'), and none of them sold until they were moved up into regular, non-hanging pots. Now these.

I don't know how many they got in to begin with, or how long ago; maybe these particular plants have sold for them in hanging baskets. But of the four plants I saw, I bought the one in a regular pot (the one in the photo, actually), not one of the hangers. So.

True, they are, though a lot of times, people think the plant has died, when all it's done is defoliate. They do come back, a lot of the time. When I wrote the Ficus benjamina profile, I went with "Basket Case" as the "person" for a reason.

I don't know about the lost variegation being due to inadequate light. These plants were in a pretty bright greenhouse, where other variegated Ficus spp. were growing just fine, and before that they would have been at the producer's, where I'm sure they would have been getting sufficient light.

Ordinarily, lost variegation means that the plant produces more solid green tissue, and this is often an attempt to get more light-collecting space when light is scarce. In this particular case, the variegation that's gone missing is actually the darker green part in the center of the leaf. If light were an issue here, I'd think the darker green part would expand and take up more of the leaf, not disappear entirely.

The explanation I think is more likely (though I don't actually know why this happened, and nobody should take this as gospel) is that this may not be a very genetically stable type of variegation in the first place.

Either way, I don't really care. I like it better without the dark spots in the leaf center, for some reason, so if the variegation never returns, that's fine by me.

I think the theory behind the hanging baskets is that since the branches do weep and hang a bit (which Ficus benjamina does in fact do), the plant makes sense in a hanging basket. I mean, I see the reasoning. I just think the actual execution of the idea doesn't work that well.

mr_, your F. b. Margarita is soooo beautiful. If and when you re-pot it, what will your soil mix be, please?

Probably just the regular potting mix from Ball that I use for most things. Maybe a little bit of Schultz aquatic soil mixed in. (See footnotes 3 and 4 of this post.)

You are a wonderful man.

I don't necessarily disagree, but -- are you sure?

I usually see it labelled as golden monique. Same leaf as the green monique. The variegation is sometimes a function of temperature as well. As for the hanging basket, cuttungs taken from downward growing branches tend to keep the weeking habit for a while, espicially when lots of thin cuttings are placed in a pot, keeping each other crowded and thin.