The ex-job got another batch of grafted cacti a little while ago. They're all Hylocereus stock with lurid mutant Gymnocalycium scions (The stock is the base, the scion is the top. I kind of knew this already, but I think I only really got the vocabulary down as of yesterday.), and mostly I'm just kind of meh, whatever about grafted plants in general, but there was one in this batch that was a little bit interesting, because the scion had remembered how to make chlorophyll again. 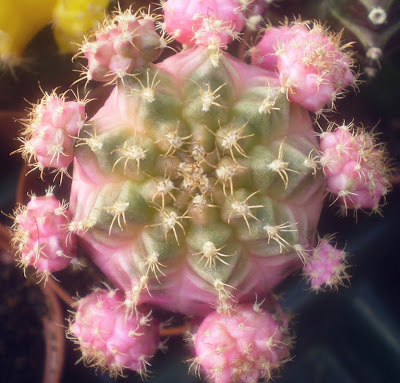 So it appeared, anyway.

This is probably something the producers of these monstrosities (have I mentioned I don't like grafted plants?) try very hard to avoid, because the whole point of these is to try to get people to buy something they think is a huge, vividly-colored flower, and if it's reverting then the scion on this plant is going to be plain, boring green eventually. But grafts between two green cacti are much more likely to survive for a long time than a graft between one chlorophyll-producing plant and another plant that doesn't: this guy would actually be the better long-term investment. 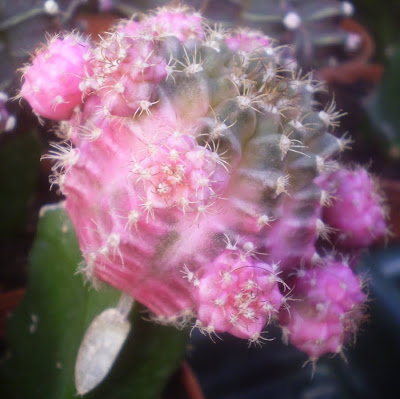 Additionally, the plants with purple Gymnocalycium scions (which can and do produce chlorophyll) sometimes go on to form an actual flower (photos here), while still attached to the stock. Presumably our revert here will also do so eventually. Which is another reason why this particular plant, sort of ugly though it might be, would be a better investment than one of the grafts with the screaming yellow, red or pink scions on the same table.

Or those poor cacti with the strawflowers glued to their tips in a pathetic attempt to fool people into thinking they're in bloom. They drive me totally mental and I'd pull the strawflowers off in stores if I didn't think it would hurt the plant and get me arrested as a walmartian terrorist or something.

Ditto that. Yiyiyi how I wince and shudder at those poor ugly things. Glad to know someone else wants to yank the stupid dried strawflowers off - maybe we should form an undercover cell of terrorists in the name of decency and good taste.

Some of the cristate Euphorbias are grafted sensitively and can be attractive. Ugly but atractive if you know what I mean. Maybe I mean ugly but interesting?

I'm in full agreement with Jodi and Anonymous regarding the ridiculous strawflowers. REALLY?!?! Do people purchase those? Anyway, I've been guilty of purchasing the grafted cacti for my kids who are fooled by the pretty color and interesting shapes. This one is pretty cool, though, as it is seemingly reverting. What a great spirit of survival! One MUST cheer this little guy on!!! :)

I hear what you're saying, Anonymous, but I don't like the grafted Euphorbias either. Or the cristate ones, for that matter. I get the appeal in theory, but they just don't do it for me, and I can't explain why.

Ugh, I hate those day-glo Gymnos! Having grown up around cacti, those things just look so wrong to me. *shudder*

I don't care for grafted plants, either. I can understand when people do it for propogation purposes or to grow a plant that would die otherwise, but personally I like my plants to look as natural as possible.

@Kimberly: Yes, people purchase cacti with strawflowers glued on, and because the flowers open and close in response to moisture they actually believe they're real. It's often difficult to persuade them otherwise. It's an extremely disreputable, reprehensible practice. The best thing to do to stop it is to never buy a plant with a strawflower glued on. The nurseries only do it because it sells plants.

"day-glo Gymnos" - that phrase reminds me of an almost-proverb in my family. "neon colours, sparkle and ka-boom!" That's what appears to be necessary for getting people's attention nowadays. So, we've got the neon colours, we've got vile glitter-covered poinsettias - how long until we get plants that go ka-boom?

I hate the weird grafts and fake flowers. They always make me feel like the plant is a big fake and I might as well bugger off and buy something made of plastic. There are loads of weird-looking cacti out there that grab your attention without having a weird colourful lump shoved on top, and if you only want a plant because of a flower, aren't you going to be disappointed anyway when it stops being in bloom, even if it IS real?