Potinara is an intergeneric hybrid in the Cattleya Alliance. It is a cross of four genera: Brassavola, Cattleya, Laelia, and Sophronitis. I've recently discovered that the term for names like Potinara, which are given to intergeneric hybrids, are "nothogeneric names." I'm not sure what the point of having a term for this is; "intergeneric" worked just fine for me. But I suppose it's maybe useful as a way to distinguish between intergenerics that are man-made, as opposed to naturally-occurring intergenerics. I really don't know. 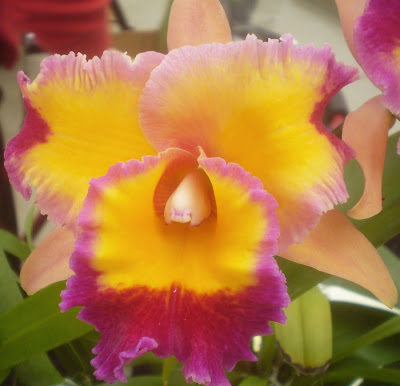 When I was very young (we're talking in the 5-11 year old range), the ice cream place closest to us had a "rainbow sherbet" that looked very much like this flower, that I still think of whenever I see dark reddish-purple and orange in close proximity like this.

Calling it "rainbow" when it only had two or three colors was kind of a stretch, obviously, but standards were different back then. We didn't even have red or blue M&Ms. And Lucky Charms "marshmallows" were limited to pink hearts, orange stars, yellow moons, green clovers, and blue diamonds. (Things have gotten more complicated since then.) It was a simpler, more innocent time.

Sometimes I long for those days, but then I remember my layered hair and leg warmers and I'm glad to be fully in 2010.

I too, as a non-botanist, am confused about these hybrid names, but it seems the prefix "notho-" is also used in connection with naturally occurring hybrids. http://en.wikipedia.org/wiki/Grex_(horticulture)