For the most part, what's come up in last year's vegetable garden has been no big surprise: it's mainly dandelions (Taraxacum officinale) and goosefoot (Chenopodium album) and other weedy stuff. I haven't been very interested in looking at it, as a result (we haven't even been sure we necessarily want to try growing anything in it again this year: an argument could be made that neither of us actually have the time), but I do remember seeing a plant come up in its center early in the spring, that was much bigger much earlier than anything else, and wondering idly what kind of weed grows that fast. 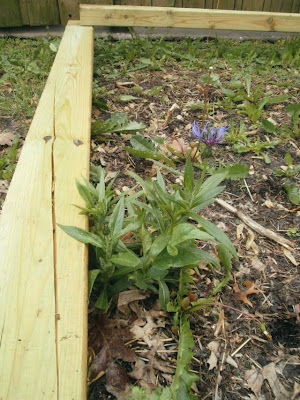 Well, as you'll have deduced from the title, it's turned out to be a volunteer Centaurea, presumably the descendant of a plant I bought last year for the garden but wound up potting in a container because trying to decide where to plant things was just too much pressure. (Although I recognize that plants can be dug back up and moved around, it's still a lot more commitment than my plants indoors are, where if I don't like where something is I just pick up the pot and move it.) The container in question was nowhere near the vegetable garden, ever, but apparently they don't have to be. 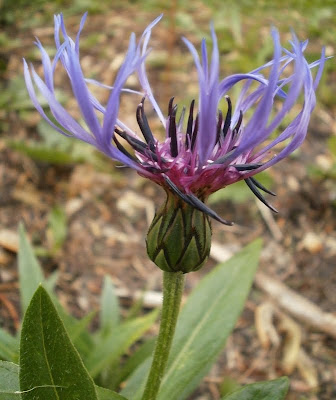 It's not the prettiest plant when not in flower. It's not even the prettiest plant when it is in flower. The flowers look . . . undercooked, somehow. But I'm inclined to leave this plant right where it is. We've been having a terrible time coming to any kind of decisions at all about what plants we want in the yard, or how many, or where that part of the yard should be, whether we want to build raised beds or just dump a bunch of dirt on the low part of the yard in the back of the lot and plant them directly in that, and so on and so forth. If this particular plant thinks that this is a good place for it to be, well, that's one decision I don't have to make.

The down side? Some Centaurea species are known to be invasive, and this is probably one of them, something I didn't know when I bought the plant. So it may not get to stay after all. This will be discussed in considerable detail tomorrow and Friday.

What you have is Centaurea montana. It's aggressive in the garden, at least here in Massachusetts where our summers are relatively cool. It doesn't like hot summers. It doesn't appear to be ecologically invasive. The USDA plants database http://plants.usda.gov/java/profile?symbol=CEMO suggests that it hasn't even naturalized in Iowa. So when it comes to invasiveness, it isn't in the same league with spotted knapweed, Centaurea maculata.

That flower does seem a little anaemic. My experience here is that it produces a lot of coarse foliage and though the bloom season is long it never produces quite enough flowers to earn it a place in a garden of mine.

This one is considered invasive out here in Oregon but I just find it hard to include them with dandelions.

Why are you being so wishy washy about your garden? Plant some vegetables already - you'll have healthy food all summer long, and writing fodder.

There, that was easy, wasn't it?

The wishy-washiness comes from there being concerns about whether, if I plant a garden, I will actually be able to keep up with it later. I already pretty much spend five out of every thirteen days watering, two out of every thirteen days recovering, and six out of every thirteen days working on the blog. Adding a garden that's anything but the most agreeable and self-maintaining garden imaginable is just going to take more time away from watering and writing. Plus, it's always hot, humid, still, or some combination of the three, at any given moment during the summer, which is all likely to lead to issues. So there are good reasons to plant nothing.

On the other hand, I'm seeing all these neat-looking plants on other people's blogs, and in other people's gardens, and then I want them, plus I have some stuff that I've been saving to plant in a garden, and seeds I bought when I was younger and more naive, and don't want to throw those things away. So there are good reasons to plant something.

I'd suggest digging out that Centaurea montana weed, like quick or you'll have it all over the place!

C'mon you 2 jump in with both feet!!! I threw out the idea of vegetables after several summers. I can get all i want from neighbors. But, flowers and shrubs, that's another story. Broaden your horizons.