Less eventful than last week, as far as either Sheba or Nina are concerned, though our vehicle was diagnosed with some kind of cancer of the air conditioner compressor on Wednesday, which is unfortunate. Not really very relevant to the pets, who don't drive much (though Nina's been studying the driver's manual, so she can get her learner's permit), but it's kind of significant to my personal life, a little.

I also read something that made me think I needed to smell Sheba's feet this week. So I did. Turns out that she does in fact have "Frito Feet." It pleases me that there's a name for this. 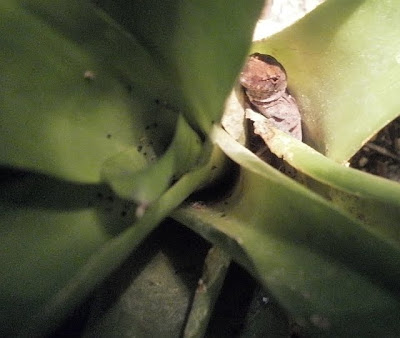 This is a very bad picture of Nina, but it's the best I had, so it's what I went with. I was trying to get a picture of her all curled up inside her Vriesea at night, but she only does this when the terrarium light is off, which means there's not enough light to take a good picture. Even the flash doesn't help that much, because it needs to have a certain amount of light present in order to focus. So for this picture, I was holding a flashlight with my left hand while trying to take the photo with my right, with predictable results. Though the grainy, washed-out look kind of accentuates the "What? I was in bed, asshole," expression on her face.

The black dots are cricket droppings. Which I would attempt to clean out, if I didn't think the Vriesea probably likes having them there.

I need to remove about 3/4 of the terrarium's Stromanthe at some point; it's taken over, and not only has it managed to crowd out the Impatiens (still technically present, but it's got one root in the grave for sure), but it's growing leaves which are so much bigger now that they don't actually fit in the terrarium anymore anyway, and wind up bent at funny angles along the walls and top. I wonder if Plectranthus verticillatus would work. Or Pellionia pulchra.

It's a wonderful photo! She looks like a character in a film noir -- the suddenly illuminated corner reveals a crouching figure. "The Third Man" perhaps.. Or at least an Amanda Palmer video.

Cute pic. I just stumbled upon your blog (the old fashioned way, not via SU) and have really enjoyed it. I'm a prolific, if amateur, indoor grower with somewhere in the neighborhood of 400 potted plants around the house. I'll keep checking in!

She's adorable and so lucky to live is such posh quarters. I have a Gulf Coast Box Turtle and she likes to romp around in the front garden. She's only about 67 years young! She'd love a terrarium full of plants though to knock around and burrow under.