I know. We've done this already. Very recently, in fact. But hey, can I help it that suddenly all the flowers are blue lately? 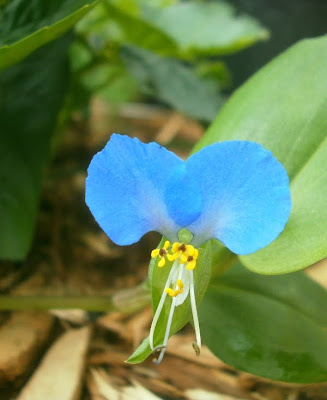 Commelina communis. Very pleased with how this photo turned out. The new camera has a tendency to de-saturate the color; things often look washed-out and dull, especially after they've been uploaded to the blog. I can pump up the color saturation if need be, but that doesn't always work out that well. This photo didn't need much modification. 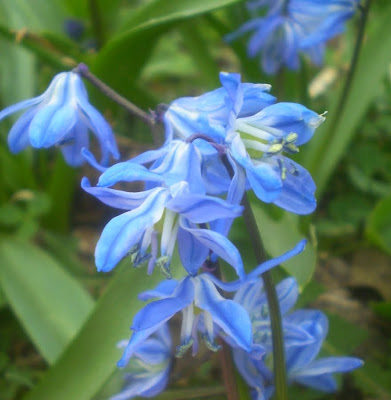 Okay, this is a cheat. (Puschkinia scilloides var. libanotica? Scilla sibirica) It isn't blooming now. But I had the picture from this spring that I never used, and it fits here. So. 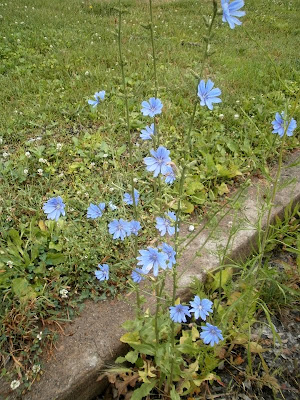 The park closest to the house (there are at least three in town, which is two more than one would expect for a town this size) has a bunch of chicory growing along the edge of the parking lot it borders. Said chicory is apparently being deliberately encouraged; I'm pretty sure it could have been mowed or weed-whacked if this were a priority. And it is awesome. 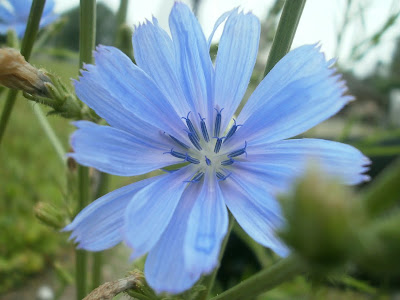 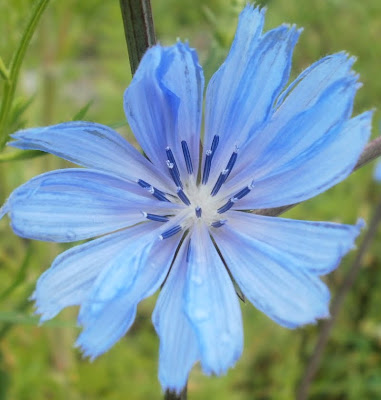 Really this whole post was an elaborate excuse to post lots of pictures of Cichorum. I really like it. If I can figure out how, and if it's left standing long enough, I intend to take seeds and start them in the back yard somewhere, though that's a lot of ifs. 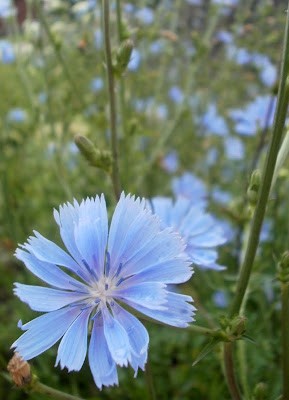 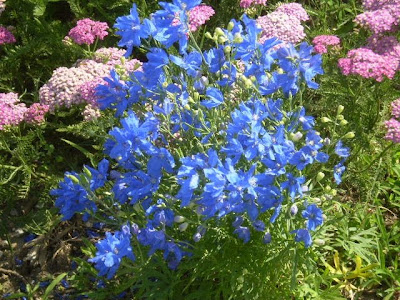 This is a partial cheat, in that this photo wasn't taken this summer, or even this year. In 2008, well before we'd even seen our current house, the husband tracked down an old schoolhouse that was for sale out in the country southwest (?) of Iowa City somewhere, and we went and looked at it, but nobody was home when we got there, so we settled for just looking around the outside. These were planted outside, along with pink Achillea, and I have never had any idea what they were. We visited in early July, so they're something which should be blooming now, though I haven't recognized them anywhere in town, and these are, unfortunately, the best pictures I have. 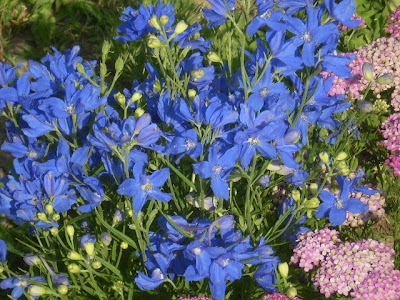 The owner actually pulled up while we were milling around aimlessly outside, and showed us around the inside, and it was extremely charming -- one neighbor, across the street, and then no others as far as the eye could see. It was up on a hill, with a beautiful view. The floor plan was weird: basically there was a tiny kitchen you walked into, a tinier bathroom just off the kitchen, and then one big huge room with maybe 16-20 foot (4.9-6.1 m) ceilings, hardwood floors, tall windows all the way across the south side, and part of the west side. It was amazing. The owner was visibly anxious about selling it, and I remember her asking whether we were really serious about it, and not to say we were if we actually weren't. We said we were, and in the moment, this was honest, but after we left, when we were talking about it, we realized that there was no way we could -- it was lovely, but needed too many repairs, especially to the basement. I've hoped ever since that ride home that she managed to sell it. She was really nice.

But so anyway. If you know what the flowers are, say something.

UPDATE: Kitty, in comments, suggests that it could be an Anchusa. From looking around on-line, I'm thinking possibly A. azurea?

SECOND UPDATE: Or perhaps Delphinium grandiflorum, says Don. Hard to confirm or reject either of these absolutely, since both Anchusa and Delphinium would fit within the range of photos kicked up by Google and davesgarden.com. The Delphinium looks a little closer in overall size and foliage. 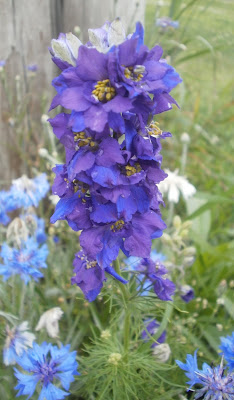 Okay, this is a Delphinium, right? I mean, I thought that's what it was when I first saw it, but then when I went to verify this from on-line pictures, I couldn't find anything that had foliage that matched this. Then I was going to call it a NOID, but that seemed stupid, since the flowers matched a lot of the Delphinium photos so well. It seemed really obviously a Delphinium, just with the wrong foliage. So could someone please assure me that I got it right? I don't care about an exact ID; I just want to know that my instincts about genus were correct.
Posted by mr_subjunctive at 2:30 PM

I don't care if it's already been done. They are bluetiful!

My daughter loves Chicory. We find it all along the roadsides on our walks, very cheering.

I'm a sucker for blue flowers and chicory is one of my favorites. I think the blue Delphinium is the annual Larkspur. The NOID blue could be an Anchusa

The last three pictures are all of Delphiniums. The first two are likely a Delphinium grandiflorum cultivar and I'm not sure it's a Delphinium of some sort.

The third and second pics from last look like Delphinium grandiflorum. The last looks like Consolida ajacis = C. ambigua = rocket larkspur, an annual that used to be in genus Delphinium.

Wow my comment got messed up pretty badly while I was working on it.

Only Anon. seems to have a better ID on it anyway.

Look at the foliage on the third pic from last---in the lower right you can see a couple of deeply cleft leaves that are clearly ranunculaceous. Anchusa, like most of the borage family, has leaves that are entire.

PS The second photo is Scilla sibirica. Pushkinia scilloides var. libanotica is white with a narrow blue stripe running down the center of each tepal, giving it the overall color impression of skim milk. Scilla sibirica is electric blue. Both species also have truly white forms.

Agreed on the suggestion of Consolida for the last picture - that's what I was going to suggest, although I'd have had to look up the name.

And I totally get the chicory love. I keep taking pictures of them, too. But I'm not going to post more than the one picture I've already posted - can't fill up all my upload space with chicory pics!
If only I could remember how to spell it - I never know if it is 'chicory' or 'cichory'. Oh, the joys of being bilingual (German has both 'Chicorée' and 'Zichorie' as names for different (cultivated) varieties, hence the confusion.)