I've yet to try growing an Anacampseros rufescens; they're not available very often, and so far when I've seen one for sale, there were more interesting plants to be bought, or it had bugs, or the price was bad. It's not an urgent, must-acquire plant for me anyway: it looks like one of those succulents for which no amount of light is going to be enough (like Pachyphytum, or some of the Euphorbias and Sedums). I've had enough of those.

But, it does flower, and the flowers are kind of cute. This is a plant from the ex-job, from a very long time ago when I still worked there. I realize that the photo doesn't show the plant itself very well: this was back when I could only take a tiny number of pictures before the batteries died. That sort of thing gives a person a very narrow focus. Things are better now. (Now, I likely average 75-100 pictures per day, the overwhelming majority of which you never see.) 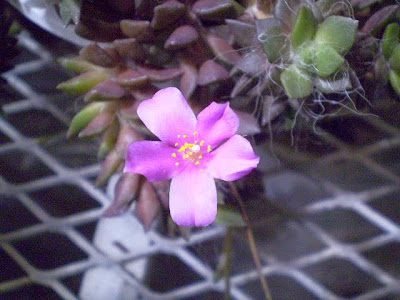 I haven't seen any others in flower, but this particular plant was a lot larger than any I'd seen before or since (6-inch hanging basket, I think, as opposed to the usual 2- or 3-inch pot), and therefore probably also quite a bit older. Which likely has something to do with it.

Have you ever had an Anacampseros? How did that work out? I ask in case I happen to see one for sale again.

I had one sitting along the front walkway where it got morning sun. I thought it was going to bloom, a tiny stem grew, but no flower. When our summer rains started (it has been raining like crazy in sw Florida) I moved it to the outside window sill in the back of the house. It loves that afternoon sun and has been growing like crazy!

I've got one. Because it is not one of my favorite succulents,* it gets only a so-so position indoors in the winter. It is crowded behind some other succulents near the south window in the winter, where it gets some sun, but not as much as it would like. It loses a little color and gets a little stretched, but it survives and doesn't look too unhappy. On the other hand, I do put it outside in the summer. That's a long-winded way of saying no, it isn't too fussy.

*No reason, just that while I love my Aloes, Echeverias and Crassulas, I only kinda like Anacampseros.

Mine was a stowaway (seedling?) in a pot with something else. It's now filling in a 2.5" pot under 100 watt equiv. CFUs in my propagation growing-on space. It hasn't bloomed, but the leaves are a beautiful deep purple red. I'd count flowers a bonus. I'm with SiestaSister & Karen715, with enough light it's been easy.

I love mine. It would probably be the size of a 2 1/2 inch pot now. And this year it had three flowers. I wanted to catch the seed pods and get the seeds, but as often happens two of them opened when I wasn't looking. I was even more vigilant after that and got a nice bunch of seeds from the third flower. You can see the relationship to Portulaca in the seed pods and the tiny seeds. Definitely sort of cute and very undemanding (if you have sun or light for it).

I have one that I put in a bonsai pot and it looks pretty good. I have it in morning sun in Phoenix because I usually burn everything, but it is not enough! It is green with no red at all. I'm going to run out now and put it in sun all day. I want it to flower too. Hope I don't kill it!

I have one that I bought a few months ago in a tiny 2-inch pot. I repotted it to a 6-inch pot and have it on my front porch, and it's going crazy! Now, mind you, I live in Central California in a hot, arid climate (we're basically an irrigated desert!). My front porch is west-facing and as you can imagine, is hot, dry and gets tons of light. My little A. rufescens has been blooming and seems very happy!

I've long since given up on growing tropical stuff outdoors, so my front porch has become a succulent/cactus garden.

Mine just bloomed the other day and already has seeds! The flowers were surprisingly big.

I've had a leggy specimen of this for so long I can't remember where or when I got it. Most likely I got it because I love reds and any other less common color in the plants I keep. It's shared a pot of a much larger epiphyllum for many years, and I have some in it's own pot. I've never seen a flower, and growth has never been what I would expect from a happy healthy plant, despite all my other cacti and succulents being very happy. What survived the awful hailstorm that destroyed my beloved and at least decade old epiphyllum remains in the pot, two long shriveled stems with a couple of tiny spots of red leaves, and no sign of any kind of growth. I originally had it in southern California, so it had lots of time outdoors with wonderful conditions including plenty of light and even there it didn't do any kind of growing.

I found a very differently shaped specimen today, a poor wrinkly thing that I expect I've blown a few dollars on, but for color it's quite nice. I got it despite my experience with the plant I have in regards to broken pieces or withered parts. I've been trying to root a piece that came from the specimen sharing space with the epiphyllum. It's remained withered for almost 3 months now. I don't know if it's grown roots because I don't want to dig it up! The upper portion of the stem is still yellowish with two leaves that I was sure would be dead in no time at the time I put it in it's little pot. They are still there, still brownish-greenish, and still not dead. The upper portion of the stem is still yellowish. And as I said, all the leaves still look like I've starved it for water since the beginning of time.

This isn't true though. The little pot dries out in about 1-2 days. It's very hot and very dry here, and so hot outside that I'm hesitant to put this one out in that.

The new plant I just put outside. Maybe it will live and flesh out to a youthful appearance again. It would be nice. It's not like the pictures of rufescens that I'm seeing. It looks much more like many of the echeverias with a tight rosette and pointed short leaves that valley in the middle. Maybe it was mislabeled. But for me, normally I avoid this plant even though I'd love to be able to have it grow like crazy and fill in the space at the base of many of my columnar cacti. Maybe I'll move the one in it's own pot into what passes for full sun in my yard. At least I can expect it to color up more, and if it grows I'll be shocked, and if it dies, well, no more of those. I've rarely had success with the majority of succulents that have the echeveria growth pattern, which is weird because as a kid I used to love asking our neighbor if I could take leaves from hers and then watch them grow into new plants. Whatever the secret is that I had as a child I seem to have forgotten, so I rarely try plants like these anymore. But again, all of my other succulents and cacti do wonderfully! Strange!

I have Anacampseros namaquensis. Just flowering now and getting its bizarre capsules. Pretty easygoing so far, but I bought this plant a few weeks ago only.
Full sun, moderate water, outside.

I bought two of these 10 years ago in Santa Barbara,CA. They were planted in 4 in pots, with west facing sunlight on a porch. I repotted them, to a 6 in pot , still west facing sunlight. They got 5 hours of direct sunlight. They flourished and had many blossoms. Sadly only 5 opened up with purple flowers, for 1 day only. Husband was watering to keep soil moist. Was it too much? Now the flower stems are standing up straight from the plant. What happened?

I don't understand what you're asking me to explain.