Well, it's finally happened: the dark purple Neoregelia I bought in August 2008 (the one with the scale problem) has decided to bloom. This is sort of bittersweet. Though it's nice that the plant's growing up, it also means that we're going to see its long, slow decline and death over the next year or two. 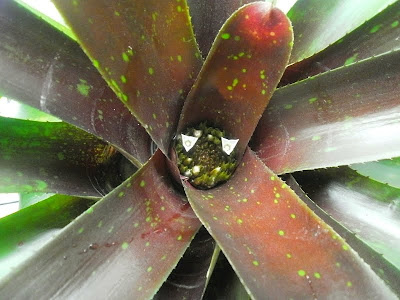 Yes, it will produce offsets before it goes, but my track record with rooting Neoregelia offsets is . . . not inspirational, let's say. I've managed five rooted offsets with N. 'Gazpacho,' but in two of those cases so far, the original offset actually died on me. I only managed to get a plant out of it because the offset that was dying itself produced an offset. Which is weird. 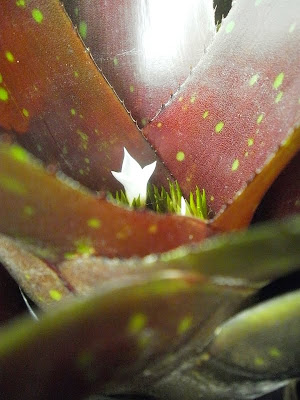 The flowers aren't especially decorative, though the structure from which they emerge pleases me. It looks sort of like a very tiny circular lawn. 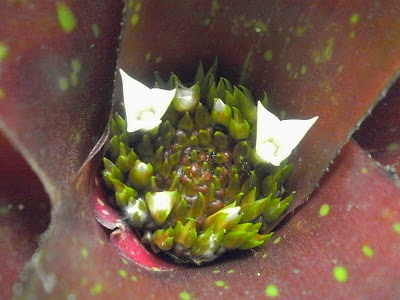 I will, of course, try to get new plants out of this anyway, by trying to root the offsets. Maybe this will be the plant where I finally figure out how that's done. I've always liked it, problematic though it's been. (I don't care so much for getting stabbed by the marginal spines, especially since this particular variety's spines seem exceptionally prone to break off under my skin.) 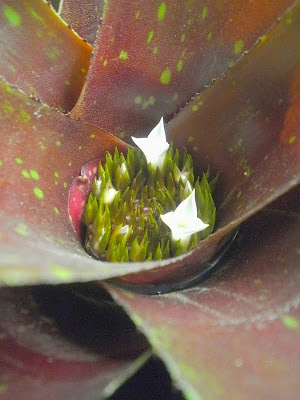 If you were wondering -- neem oil does appear to have fixed the scale problem. It appears that using actual neem oil, instead of a neem oil extract, is important. I'm now using neem quite a bit around here. The smell still makes me want to gag a little, but I'm getting used to it, apparently. The only remaining issue is that when I've been doing a lot of neem spraying, I find myself sneezing a lot, for quite a while afterward. Natural product or not, I suspect this is probably a sign it's not good for me, but I haven't figured out a better way to do it. The product itself works well, though. I'll have to write a post about this sometime.

We add peppermint oil to neem to moderate the smell.

Yeah, you'd said. The stuff I've got says to mix it with dishwashing liquid, about 50-50, so when I use neem here it smells partly like lemon. So far, this hasn't helped much (though I no longer like the smell of our dishwashing liquid -- not really the effect I was hoping for). It's definitely an improvement on the straight, undiluted neem, though.

I can see how peppermint might be a more effective smell-masker than lemon.

I don't much mind the smell of neem. Although yesterday, I was sitting in a restaurant sniffing random things, trying to find out what was smelling so weird. And then we came home, and I walked past the open bathroom door, and said, "Oh. It was me. I must've had some neem on me still!"

I usually have better luck with rooting bromeliad offsets, but then again the warmth does make a difference.
To combat scale I usually use my hands and a hose nozzle to remove them mechanically, since its the lack of movement over the leaves that causes the problem to begin with. Neoregelia leaves can be spiky though, so I usually end up with red spots on my arm.