I didn't know whether this would work; I'd gotten berries1 on the plant a long time ago (last summer or fall, maybe?), and they turned black/purple like they do. Which is how they remained for a very long time, because I wasn't sure at what point they're officially ripe and plantable. Eventually one started to shrivel a little and then I thought I'd probably waited too long, so I opened them all up and took the seeds out. 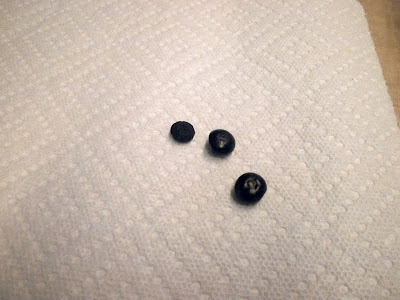 I am aware that the photos suck. I needed more light, apparently, though it didn't seem that way at the time.
The seeds are surprisingly small, compared to the size of the fruits, and each drupe only produces one seed. The flesh of the drupe2 was also surprising. I expected something more like a blueberry or tomato, where there are multiple seeds just kind of floating around in a semi-liquid mass, but it was actually surprisingly dry, yet soft. More like a banana than a tomato. Seeds are located at the point of attachment to the plant, and take up very little of the drupe. 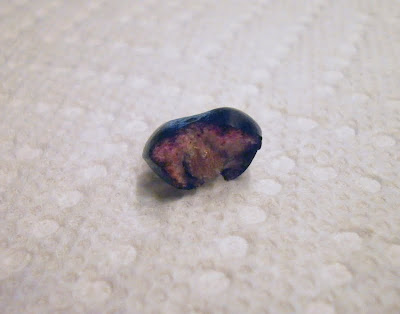 The seeds are slightly less than 1/4 inch (5 mm) in diameter, and slightly ridged. I wasn't sure how to plant them or how to simulate going through a bird's digestive system, so I just washed them off briefly, stuck them in some damp vermiculite in a plastic clamshell container (like I use for propagating Begonias), and set the whole thing in the warmest, brightest spot I could come up with. 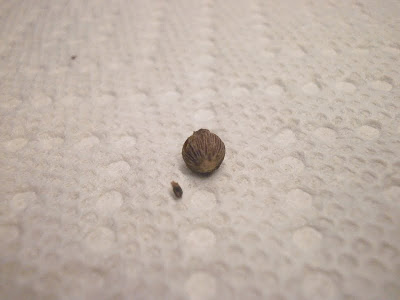 The first activity I noticed was a couple weeks later.3 I was pretty happy to see one sprout -- I wasn't sure whether the seeds were any good, considering how long they'd been on the plant. 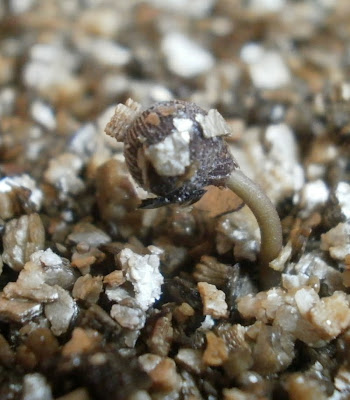 Since this picture was taken, the other two seeds have also sprouted, though so far none of the three have shown any leaves: all three plants are still wearing their seed coats, and I'm a little scared to remove them, lest I damage something important. But fairly soon, they're going to hit the top of the container anyway, and then I'll have to transplant, so I hope to see leaves very soon.

Would that I had more than just three seedlings to pot up, though it appears that plants may sucker: the plant that produced the drupes is now a small clump of 24 stems. I can't find anybody confirming this on-line: all the invasive-species sites emphasize the seeds being spread by birds, and don't mention whether or not there might be suckering, but it seems unlikely that the original 3-inch plant I bought could have contained 24 individual seedlings. Measurement and geometry tell me that it's technically possible, though.4 Maybe this new crop of seedlings will sucker a little as they grow, and I'll end up with a second, full-looking plant in a couple years, or maybe they won't, but I'll have new seedlings to add to them later on. Either way, I'm pretty tickled that this worked.

-
1 Technically, they're drupes; the distinction between the two is not that important for our purposes, and brief googling didn't give me any easy ways to tell the difference between the two, so I decided I didn't care. But I'll still use "drupe" henceforth, for the sake of botanical correctness. Pedants in the audience -- and I know you're out there -- will be pleased to know that in most horticultural or lay contexts, people call the fruit of Ardisia elliptica "berries," so now you have a whole new world of people to correct. You're welcome.
2 $50 vocabulary word for the flesh of the drupe: mesocarp. (You now owe me $50, by the way.)
3 According to the dates when the photos were uploaded, I started the seeds on June 27, and noticed the first seed sprouting on July 14. This is pretty fast, though for some reason it felt slow.
4 The circumference of the clump at soil level is 9.25 inches, and it's a more or less circular clump, which means its diameter is just under 3 inches. (9.25 / pi = 2.94 inches). Add in that the trunk diameters have increased, and that the plants in the clump would tend to lean away from one another, for better light, and we come up with 24 plants in a 3" pot as being plausible.
Posted by mr_subjunctive at 2:30 AM

So we're even right? Because I'm one of those pedants. Hahaha, sorry, it's hard to keep a straight face saying that.

Some great info! Isn't it exciting to grow unusual things from your own seeds? I'm not as good about recording what I plant, since I plant so many different seeds that have a long germination period. I pot the seeds up together and use a lot less water and get a lot less fungus gnats. Some of my seedlings are tropical trees from south florida, some are from tropical fruit, etc.