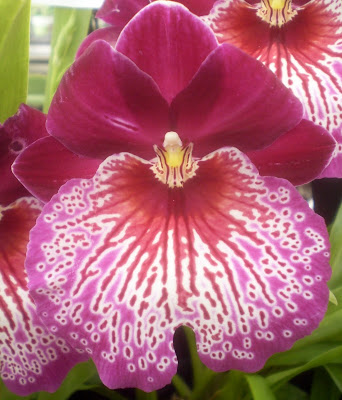 Miltoniopsis come from Costa Rica, Panama, Peru, Columbia and Ecuador. There's a fair amount of agreement that they're not particularly easy orchids to grow, since they require high humidity (one site said minimum of 55-65% humidity), and the watering appears to be difficult to get right. The flowers are pretty, obviously. I like this one better than the previous Miltoniopsis, but they're all nice, really. Supposedly the flowers have a rose-like fragrance, though it was basically impossible to check fragrances at the orchid show last March -- too hard to get close to the plants, the air was swirling all over the place, there were lots of other people there, quite a few of whom had their own fragrances -- so I can't actually confirm this.

There is no chance I will ever own one of these, though I think they are pretty, because one is never ever supposed to let these dry out. Every plant I own will, sooner or later, get completely dry. I mean, I try to keep them all happy, but I do miss waterings sometimes. This is just a fact, and I accept it. I may be seeing them more often in the stores, though: my ex-job had a couple around not too long ago, and I'd never seen them there previously. Granted, I think that's the only place I've seen them for sale in a regular everyday retail kind of setting (there were vendors at Wallace's selling them, when we visited), but if they were cheap enough and available enough for us to get them, then they have to be cheap enough and available enough that other places could get them too. I'll have to try to check on this rose-like fragrance thing, next time I see one.

Mr Subjective, I can confirm that the miltoniopsis blooms do have fragrance like that of a rose. I have a few of this plant and been enjoying their smell a lot.
The smell is stronger as the blooms getting more "mature", not at when they are first open though.

Regarding watering problem, I'm switching my pots to Lechuza gradually. So far I've all my big leaves plants (mostly Aeaceae) in it and they're growing much more better. Probably I'll plant my orchidee in such a pot too.

I love these guys, but like you am unwilling to bring one home due to their not wanting to dry out. It's just not going to happen at my place.

I think being a little creative to avoid dryness can be achieved. Must use a hole-less and perhaps deeper type of pot. putting a peaty type of soil as lower layer... maybe halfway with the usual bark orchid medium around the sides of the plant. Anyway I too can dry out plants, even more so when the outside temperatures and dew points plummet in the winter months. Majesty Palms Thrive indoors in the winter and great outside in the summer when using a hole-less pot with the bulb just sitting at or slightly above the soil line. Holds water around the roots longer too. The plants seem to be able to handle itself without air moving through the soil.