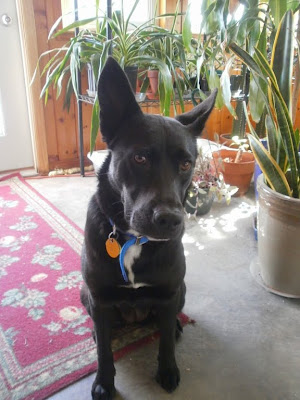 This week I had the idea to try recording a video with the new camera, to post here, on the theory that it might be more interesting for readers to see Sheba in motion. That plan fell apart after I spent a substantial chunk of my Thursday trying and failing to upload it, repeatedly. I don't know why it didn't work: it's a file type Blogger says it supports, it wasn't an excessively large file, everything looked like it was set up properly, but when I try to upload, it just sits there for a long time and then about 10-15 minutes later I get an error message that doesn't actually tell me anything except that the upload failed.

I've given up for now. It's not a big deal. It wasn't Citizen Kane. (Perhaps Citizen Canine, but I think for that it'd still have to be longer than a minute and a half.) Probably at some point either Blogger will get their stuff together, or I'll try another video and whatever mysterious problem this one had will not be a problem. I'm not interested in throwing any more time at the issue, though, having spent a substantial amount of effort in the last couple days trying to figure out what the problem was. It'll happen when it happens.

Also, there was a picture of Sheba a couple paragraphs back. Not her best photo, but I liked the facial expression.

Also also, I may be going to another orchid thing at Wallace's Garden Center in Bettendorf tomorrow. The oppressive heat and humidity of the last few weeks is supposed to be over, and I haven't been out of the house in what feels like forever, because of the heat, and there's a conveniently-timed orchid thing (not a show, as far as I can determine, but there will be vendors there selling plants, at least), so we're probably going. Even though I don't have money to buy an orchid and probably wouldn't even if I did, and even though I already have orchid-picture posts planned out to February (really: one will happen next Tuesday) and am not entirely sure what I need with more of them. Sometimes the destination isn't really the point.

I love Sheba's expression. It looks like she's thinking "Okay, what is he up to now?"

And yes, it's annoying that it gives you an error message but doesn't tell you what the error is.

Seriously? Why even bother accepting video at all, then? *grumble*

I really didn't want to have to set up a separate account anywhere (YouTube, Vimeo, etc.), 'cause I feel like I have enough accounts to manage already, but perhaps it will come to that.

I just always made sure my videos were less than 1 minute, but after a few years of blogging lots of videos of kids, I actually reached blogger's limit and they told me I couldn't post any more. So that's what turned me to Vimeo. But this was more than a year ago so I don't remember any details.

I also think the "1 minute" rule is linked to the size of the video, roughly 1 Mb per second so it's probably more of a size restriction on Blogger's part than a time restriction on the unwritten video posting rules.