I'm kind of impressed with myself on this one, and some of the other Aloes I have. I mean, I'm not saying there should be a national holiday or anything, but I'm surprised that I've managed to keep this plant growing as long as I have, given that I've never had that much full-sun space available. The credit, of course, goes to the genus: I hadn't imagined that Aloes could be so flexible. 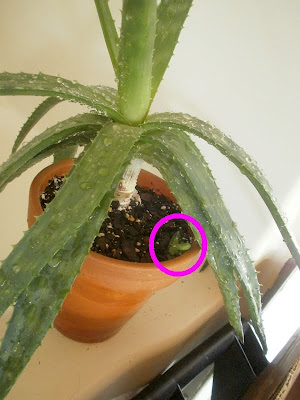 I've had A. maculata since April 2007. I've been calling it by the synonym A. saponaria all this time, and only just today confirmed for myself that maculata is the correct name. So that's one more thing to do a find-and-replace for on the blog.

It's a little funny-looking, because it's been getting light from the side (window), instead of from overhead like it would naturally. The downward-arching leaves are its way of trying to point as much leaf surface at the light source as possible. This makes it harder to get the plant off and on the shelves, which is annoying, but otherwise it seems harmless. 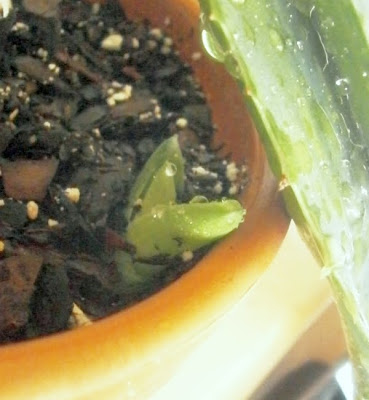 And now there's an offset. If it'd been outside for these past three years, it would probably have done that a long time ago, but at least it's doing it, finally. It's been a nice, solid, quiet plant. I won't mind having more of them.

Hmm, I don't think it warrants a national holiday. But the state should totally give you some sort of ceremony. Maybe a parade, too.

My Aloe vera got a holiday out in the sun last year. Just to make it easier to water the other plants on the windowsill. About 75cm across. The slugs had it down to the bare stumps in less than a week.

Yeah, I don't think you have maculata/saponaria, but I don't have a good guess about what that plant actually is, and I'm not even remotely an expert on Aloe taxonomy. The images that come up for a. branddraaiensis vary a lot, to where I'm not entirely clear what the plant is supposed to look like.

I'd actually be fine with a statue. Not even a marble statue. Bronze would be fine.

From what I'm learning about Aloe vera (barbadensis) as I research for the upcoming profile, I'm really surprised by this.

You may have given the slugs really uncomfortable diarrhea, if that makes you feel any better.[1]

[1] I don't think slugs actually get diarrhea. But one never knows.

Perhaps that is why they had to eat so much of it. They seemed perfectly happy with it and ignored all the other plants around it. They might be able to ignore the anthraquinones like birds ignore the heat of chili.

Now my root cutting has recovered I have thought of adding a bit of it to slug traps.