I loved seeing all the Portulaca flowers last summer, and saved a whole bunch of seeds so I could start some again in the spring. Well, in the spring, everything was too chaotic and busy here, so I didn't start them, but I thought I could still throw them on some cleared ground somewhere, once one of us cleared some ground. But then we didn't clear anything, and didn't clear anything, and once we did clear some ground to plant stuff, it turned out that I wanted that space for pineapple sage, not Portulaca.1

So eventually, in late May, I gave up and threw all the seeds I'd saved in a couple containers, hoping they'd have enough time to bloom and set seeds before the fall. About two and a half months later, I'm seeing the first flowers. 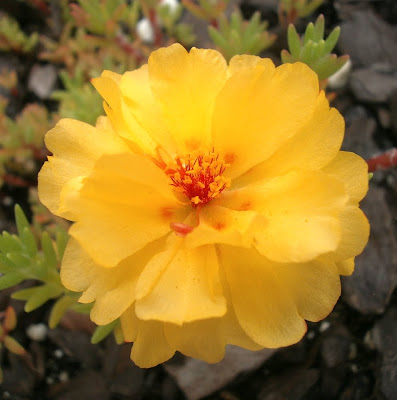 I know I should have thinned the seedlings: I think every. Single. Seed. Germinated. Thinning seemed so mean, though. 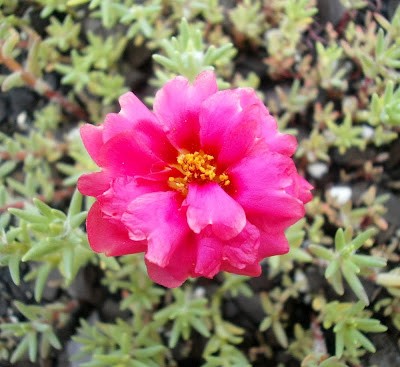 The dominant color appears to be yellow, though I've probably seen fewer than fifteen flowers so far, and white's catching up. 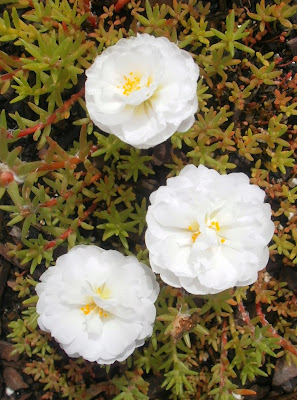 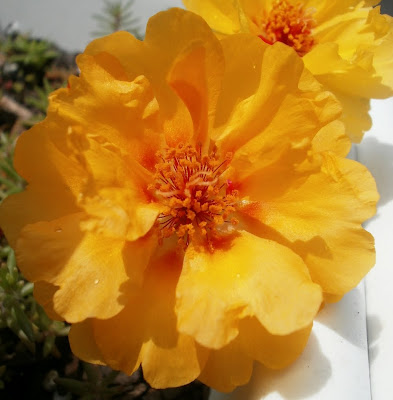 My personal favorite color is this sort of peach-pink. Not sure why: it isn't a color that I'd ordinarily be that fond of, but I think it works here. 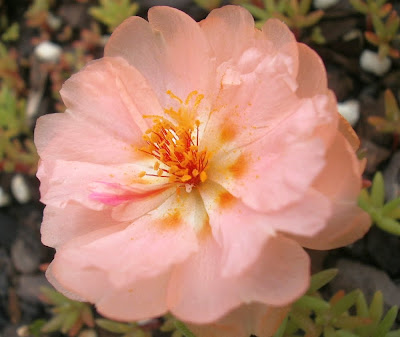 1 Which was a good call. I love the pineapple sage. It's getting huge, by the way. 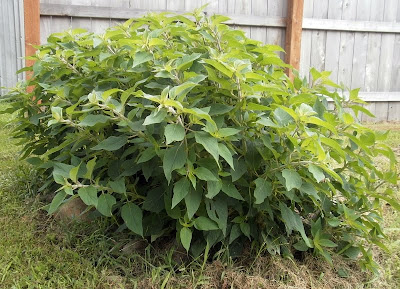 I don't know if it's huge because of all the rain we've had this year, or if it's just the difference between planting in the ground last year vs. planting in a container this year, but those plants were barely a foot tall (30 cm) in mid-June. 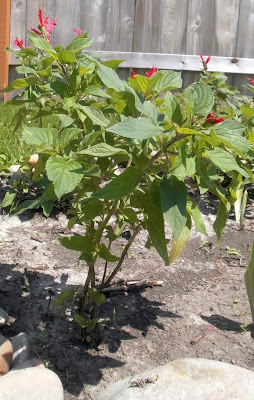 Same plant, as of 17 June 2010.
The smell is less intense on the outdoor plants than it ever was on the indoor ones: thinner, weaker leaves seem to smell more strongly. They're also occasionally being eaten by caterpillars of some kind, which I'd mind more if the plants appeared to mind more, but they roll along just fine. Possibly I'm grateful that the caterpillars are there to keep the plants in check. 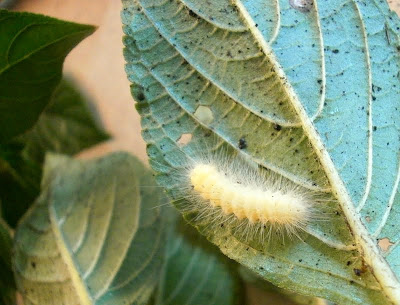 Haven't seen any caterpillars like this for a few weeks now, but something's still eating the leaves. Anybody recognize this guy? I couldn't come up with an ID.
In any case, I can't wait until they flower. It should be very cool. I'm excited.
Posted by mr_subjunctive at 2:30 AM

Pineapple sage blooms late in the season, but it's worth the wait.

Portulaca is a great plant....but during winter, they die. In Tucson, I find that the ice plants love our summers!!

Where I live, portulaca can get out of hand. I do like the array of blooms, though. It makes for a superior ground cover, looks-wise. And they're ridiculously easy to propagate by cutting.

Considering the good growth they have put on perhaps the low essential oil problem is too much nitrogen as well as water. The indoor plants were probably well-stressed and occasionally underwatered.

I love pineapple sage. I would love to be able to grow pineapple weed (Matricaria discoidea) but I haven't got anywhere sunny enough and can never get the seed to sprout for some reason.

My aromatic plants almost all get a low N, high PK fertiliser with plenty of microminerals added. Often they are also stressed by forgetting the watering though that is my character fault not a policy.

Mint gets lots of N and water.

I know. Last year, when I just had the one in the container, it started to bloom so late that I had to bring it in; if it'd been planted in the ground it might have been fine, but as it was I felt kind of cheated. I'll be ready for it this year, though.

Better than any of the guesses I managed to come up with, and especially plausible considering that the photo at bugguide.net is of a caterpillar on a pineapple sage leaf. Haven't seen the moths, but I suppose maybe I wouldn't, necessarily.

Yeah, I think they might be actual annual annuals, that have to die after a certain point. But they still reseed like crazy, I hear.

I would never have even thought to try to propagate them by cutting, with the seeds being so easy. Doubt I'll try: I don't see them being easy to keep going through the winter inside. Though I wouldn't mind being assured of a continuous supply of those peach-pink ones. Hmmm.

I've actually never fed the plants outside. I mean, I know that doesn't mean they aren't still getting lots of nitrogen, but if they are, there's nothing I can do about it. The indoor plants got 14-14-14 Osmocote all the time, but clearly never appreciated it. And yes, they were badly underwatered too. (I tried, but they're thirsty plants.)

The Matricaria around here is only around for two or three months in the spring; as soon as it gets hot, they disappear. And I never see them anywhere that doesn't get full sun for 75%+ of the day.

I used to have a Portulaca I grew from a cutting - I don't exactly remember why I took that cutting - probably because I broke of a stem, which, at thirteen or fourteen, was still a disaster for me (I've become so much more callous about killing and damaging plants since!) so I stuck it in water.
I kept that plant indoors for at least one winter, possibly two - it was cute, almost like a little bonsai.
I keep planning to do that again, but I don't see it working very well in my north window.

A Portulacaria afra or an anacampseros might work better indoors. Same family, and more or less pretty similar looking. Portulacas are, as far as I know, true annuals.

One day I have plans to fill up a strawberry jar with a Yucca on top (been nursing the 'clearance' yucca to health for a couple years now), different varieties of sedum on half the holes, and portulaca spilling out of the top and sides. Good to know it grows from seed easy enough; I can fill a pot like that with a couple seed packets rather than throwing money down for an equal amount of pony packs.

I love Portulaca a lot too! I usually just let it reseed itself. But last year I planted some in my front planter and they got too dry. Ooops! Dead! Darn it! I need to water that planter more.