Something I don't believe I'd ever seen before. Not 100% sure on what it is, even, but the plant is definitely a Magnolia, and these have to be either seeds or fruits. Freaky-looking. 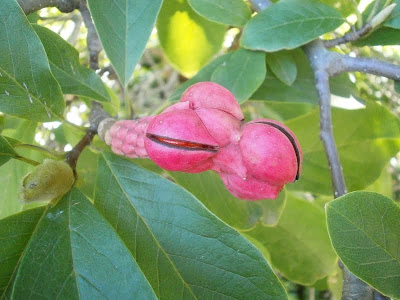 This seems especially appropriate, as my whole world has been getting weird for the last week or two. I mean, my actual personal living-arrangement-type life is the same as it ever was, and I'm accustomed to some strangeness, but . . . I can't even explain.

30ish Caucasian women are turning into teenage Filipino girls, I'm being offered money to link to something that was either the Canadian yellow pages or a close facsimile thereof (turned it down: it made no sense), people are e-mailing me to demand cuttings of stuff (they will be disappointed, needless to say, but this hasn't happened before so it still counts as weird), other people's books are unwriting themselves (will be explained tomorrow), and there are a couple other things that might happen later, that I can't actually talk about yet. (Neither of them is a book deal, so just put that hope back in your pocket. I'll let you know if/when it's time to get excited.) I mean, it's not particularly bad weird stuff. Just people behaving in inexplicable ways, plus some unprecedented happenings. 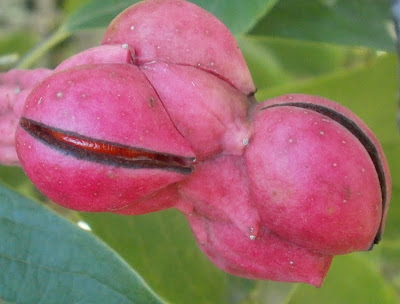 September's not ordinarily a kooky time of year for me, so I can only conclude that this is October's influence creeping in early. Or maybe March. This would be just like March, to lull me into a false sense of security and then boom! show up in September, when I'm not expecting it.

This is definitely a seed pod. Magnolia seeds have a bright red fleshy covering which is visible through the opening in the seed pod.

That magnolia may get freakier. I have seen some that look very like the fruit on this page:

Yes, magnolia fruit. In a little bit, it will split open and the bright red seeds will pop into view. Making it even stranger.

Yup, those are mag seeds. Nothing major in the South, but I can see how they're strange to the unaccustomed eye.

How interesting and horrible. Drugs are a valid option. Or stopping drugs; whatever the case may be. Take advantage of the weirdness, that's what I say.

That is one of the weirder things I've seen on the internet today. o.0

I bet it's October. October always seems to be impatient.

I agree--I see magnolia (and photograph the flowers) all the time, but I've never noticed the fruit. They're cool!

I'm looking forward to at least one of those mysteries being explained tomorrow! (Or, rather, a more detailed version, I guess.)

I've just spotted some on my magnolia tree, that's why I've gone to the internet to get more info. Living in my deceased parents house now for almost 6 yrs and the first time I've seen this. I must say, rather weird.According to my info the magnolia tree is an ancient tree species.