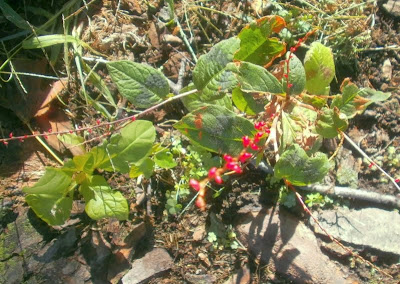 I was sent this plant by a reader who may or may not wish to identify him/rself, and planted it around the base of the maple (Acer saccharinum) in the back yard. This is less because the base of the maple needed something planted around it, and more because when I googled around for information about the plant, I found somebody saying that they'd planted it around the base of a tree where nothing else would grow, and it had done fine there. Having no good ideas of my own, I copied that one. And it worked. 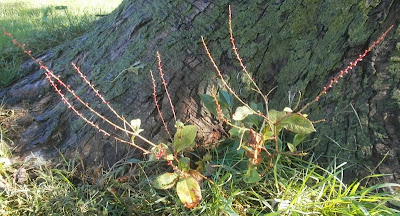 I was trying to get a shot of the full plant, but it was apparently just a really bad time of day, lighting-wise, 'cause this wound up looking like crap.
I also divided up the clump I received, figuring that maybe they wouldn't all make it, but if there were eight of them, the odds were pretty good that at least one would. It turns out that this was an unnecessary precuation, because they've all rooted and grown, even the ones the husband ran over with the lawnmower earlier in the summer. (He didn't know he was. He knew I'd gotten plants, but hadn't gotten a good look at them, and it's possible that I hadn't told him any of them had been planted outside, much less where. And they look sort of clovery when not flowering, so.)

They've been blooming for a few weeks; I just hadn't bothered to get a picture until now. Because the stem is thin and the flowers are tiny, my camera is reluctant to focus, so it's hard to show what the flowers actually look like. This is the best I have: 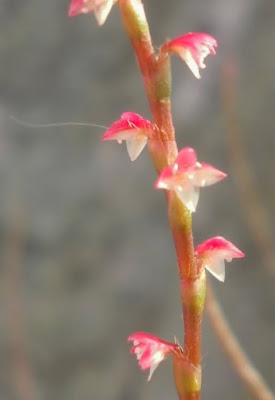 Which is good enough to show that the flowers are strangely colored, the upper half being red and the lower half white, with the line running through the middle of some of the petals. I can't think of another flower that does that. 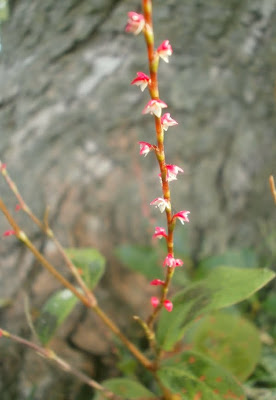 Some sources say that it spreads somewhat aggressively, but when I read around, most of the people I found talking about it didn't seem too bothered by this. Plants are fairly easily pulled up, and reseeding gets to be a problem, you can just cut off the flower spikes. I'm not too worried.

Oh golly gee whiz! I'm so excited that you like the Persicaria virginiana that I sent you! It grows like mad here and I'll be glad to send some to anyone who wants it. In full sun, the leaves are almost chartreuse, but dark green in shade. I love the cool little flowers.