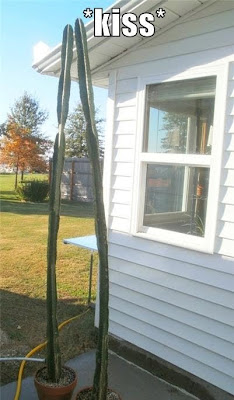 I've had these two Cereus peruvianus plants since 2004. These are the ones I had to treat for mealybugs for over a year -- I used rubbing alcohol and went over the whole stem surface with Q-Tips, I sprayed with neem, I repotted, I took them outside for a summer, I added imidacloprid granules to the soil, and finally something worked.

They grew about a foot during the course of the summer (2008) they were outside, too, but then they came back in, they went through the winter, then we moved them to the house, and they've been in the southwest corner of the plant room since the plant room was habitable by plants.

Why the southwest corner? Well, the main reason is that I don't really have any good southern exposure in the house, and that was the brightest spot I could find for them, but it also happened to work out really well, because they were just the right height to fit that corner perfectly. Yes, I knew they'd grow out of the spot at some point, but it worked well enough originally.

So then I waited for a year, and not only did they never outgrow the spot, but they never grew at all. Which was strange, because, after all, these are the same plants that went from 17 to 51 inches (0.4 to 1.3 m) in the first year I had them, and just the summer before we moved here, they'd added another foot. So they're perfectly capable of growing very fast, but they weren't doing it. Why not? Not a mystery I was especially interested in solving. They weren't outgrowing their spot, they weren't dying, they were in a spot that was awkward to get to so it would have been tough to check into the matter, therefore if it ain't broke don't fix it.

So then last Friday, for unknown reasons, I happened to check under the pots, and saw roots coming out. Which eventually led to me repotting these plants, which is why they were outside in the photo (no room to repot something that tall in the house). They turned out to be the most rootbound cacti I've ever seen (I apologize for the lack of a picture), alas, which explains the lack of growth.1

Anyway. So now they're in new soil, in the southeast corner of the plant room. It's not a particularly good spot (it's a little cold and dark for their purposes, though we might be able to fix that, at least partly), but it's the spot in the house with the highest ceiling: 9'5" (2.9 m). The taller of the two cacti is 7'5" (2.3 m) right now, so something else will need to be done before the year is up, but better this than have them continue to live rootbound.

It turns out, in case you're interested, not to be that tough to repot a 7 1/2-foot-tall Cereus peruvianus. The spines are relatively small, and the ribs are positioned such that one can hold on to the plant without getting stuck. I did have to enlist the husband's help to hold the plants upright while I repotted,2 but aside from that it was a piece of cake.

1 Something I hadn't thought of until recently: having this many plants means I should probably be repotting more than I am. If you're supposed to repot once a year, then in any given watering cycle (14 days), I should have to repot 33 plants, on average. I repot a lot, but I know I'm not doing two or three plants a day. So no doubt there are other plants in the house in dire straits as well. I haven't yet started writing down when I repot, because it hadn't seemed necessary, but I'm realizing that I probably ought to start.
2 They don't look upright in the photo, but that's because they're both curved slightly. This is probably the result of me not getting them properly vertical when I repotted them in 2008, plus a long period in the corner of the plant room, during which time I didn't turn them that often because they were hard to reach, and not growing anyway, so why bother. At least with the husband's assistance, I can get the weight balanced, even if the stems don't wind up perfectly vertical.
Posted by mr_subjunctive at 2:30 AM

Rule of thumb: If the plant height is more than ten times the diameter of the pot, it might be time to repot.

Cute picture. :-D How can you not get poked by cacti that big? If I had been in your shoes, I would probably be applying ointment by now.

I had one of these but I gave it away because I didn't like how tall it was getting and it was no where near the height of yours. But, I wouldn't have a place for it if it had. They are amazing!!!

I bought one of those a few months back at a succulent/cactus show thinking it was a San Pedro. I was pleased to be mistaken (my real SP is getting out of hand in less than a year). I hope it will actually fruit someday.

re footnote #1: I suspect I'm not the only one who would be interested in hearing about how you organize your plant maintenance, especially the watering. Perhaps that would be worth a post in itself.

Surely not everything gets watered at 14 day intervals? If you have over 800 plants, you must have some system for keeping track when different pots need different watering intervals. Maybe it's second nature to you, but I'd find that useful even though my collection numbers only a tiny fraction of yours. I'm sure you don't stick your finger into 800 pots every morning!

It's really not that hard. With my right hand, I grab the edge of the pot. With my left hand, I grab one of the ribs on the plant -- thumb on one side, finger on the other. (The spines are short enough that I can grab a rib without having to touch them.) And then you lift and carry the plant wherever it's going.

It wouldn't work on lots of other cacti; it wouldn't even work on some of the smaller specimens of Cereus peruvianus I have (they have thick ribs that would be hard to grasp, but they're small enough that I can control the plant from the pot alone). But it works on these.

I've thought about doing such a post occasionally, but I wasn't sure it would be of that much interest, since A) I figure most of my readers don't have especially large collections of plants and wouldn't need to know, and B) I refer to certain aspects of the process often enough that I sort of assumed that anybody who wanted to know would have pieced it together by now. But it's different to have it all together in one place, I suppose.

I was thinking along the same lines as anonymous, IRT a concatenation of your maintenance schedule and tracking system into a post.

But, you're right, I've been following you long enough that I could conceivably figure it out on my own. But despite having a clue, I still haven't sat down and figured it out for myself. I should; my plants would like me better if I did.

These are a lot of fun to grow. I remember my Grandma has one in her house and she always had to chop it done because it touched the ceiling. This was in Wisconsin. I'm here in Arizona and these things get huge!!! One of my favorite plants in the garden.

I like Pat's comment. Honestly, if I were to see those with fresh eyes, "rootbound" would be the first thing I thought of! I thing that rule of thumb for repotting plants once a year is bogus, and most of my plants wouldn't need it at all after only a year.

Our rule of thumb is there should be as much root mass below the soil line as plant mass above.

Oh yes! I have a Cereus peruvianus which utterly stopped for 5 or 10 years. (See, I get behind in repotting, too.) I think it simply filled its pot with roots and beyond there would not budge.

A few months ago I took pity on the poor guy and planted him in the ground. By this time, his skin was waxy and gray, almost mummified. I was afraid it would expire like a mummy or a vampire touched by sunlight, in a puff of moldy dust.

But I watered it with a bucket (adding some fertilizer) and within a few weeks it sprouted new arms. Now it's thriving in its new spot.