I missed the flowers; I guess they happened when it was too hot to walk with Sheba (though I've seen some before), and I only get to see the aftermath. But the seeds are at least moderately decorative on their own, no? 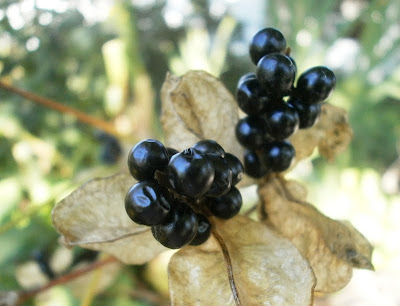 I was kind of tempted to take some of the seeds, but didn't, because for all I know the plant's owner has been waiting to collect them all year long and has plans to start a small backyard blackberry lily farm. That scenario is unlikely, granted, but it could happen.

I don't actually know what I'd do with Belamcanda seeds anyway, if I had them. I can't imagine where I'd plant them, and I'm not sure I actually like the plants that well. Sometimes I desire shiny objects. I'm human. It happens. I got over it.

I also didn't steal the Canna seeds I saw yesterday, though I actually have thoughts on when and how I could use some Cannas in the yard. They even have to be a specific color: I want plain green leaves and red flowers. Red Cannas, with pineapple sage. Wouldn't look like much for a lot of the year, but look out, September/October! For that couple months, it would be fantastic. Which, those are the only months I particularly want to be outside anyway, so that works out nicely.

Well, maybe April and May also. But that's what the daffodils (that came with the house) and Irises are for.

Very pretty seeds. I haven't tried a Belamcanda here because they'd be marginal at best, I fear.

Whenever I see ripe seeds its hard for me to resist too! I usually give in if its on public property or roadsides where they'd be hacked down anyway. I wish that rhetorical farmer luck on his rhetorical blackberry lily enterprise.

Belamcanda and Pardacanda (Belamcanda x Pardanthopsis) grow easily for me in zone 5. Individual flowers only last for a couple days but new flowers are constantly produced.