These are a few NOID plants I've seen recently: none of them felt substantial enough to hang an entire post on, but maybe five of them combined will feel like more of a post, is the theory. Holler in the comments if you know something, or even have a guess about a genus or family. No penalties for guessing wrong. 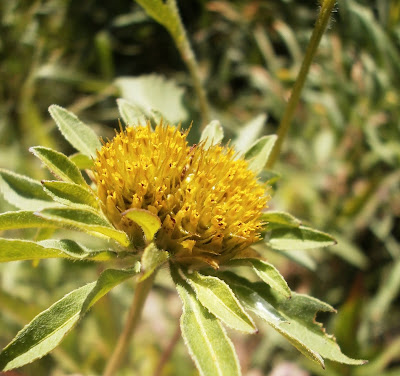 NOID Plant Number One.
Plant Number One was blooming in early September (the photo is from Sep. 3), and continued for a while afterward. When I first saw it, I thought it was some kind of weird yellow clover, because the flower heads had that same sort of shape and texture, but the flowers themselves are actually not clover-like at all. It's fairly common around here; I saw some in people's yards, and quite a few along the roadside in unmowed ditches and stuff. I didn't get a picture of the whole plant, unfortunately (I tried, but I had trouble getting decent pictures due to wind), so I'm hoping that someone can identify it based on the flowers alone.

UPDATE: Plant #1 has been pretty definitely established as a species of beggarticks (or bur-marigolds, or tickseeds), Bidens sp., though pinning down which one is difficult. I'm personally leaning toward B. tripartita, but B. radiata, B. frondosa, and B. tripartita are all strong candidates. Figuring out which, specifically, is complicated further by the fact that Google searches for Bidens turn up lots of stuff about the Vice-President. 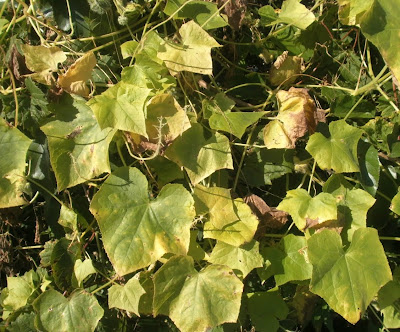 Plant Number Two.
Plant Number Two feels incredibly familiar to me, like I ought to know what it is, but I looked for it on-line when I took these pictures (the date on this photo is Sep. 26), and whatever I'd thought it was (don't remember it now) was wrong. It's a vine, which at first glance sort of resembles a grape vine (and I've seen a lot of spots where it's growing alongside and intertwining with grape vines, actually), but the shape of the leaves, and the leaf margins, are wrong for that, plus the seed pods (fruits?) are really wrong: 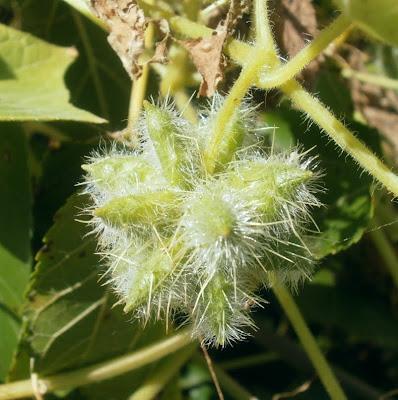 It seems to be very shade-tolerant, too, compared to grapes; I've seen it in a completely wooded area, where it couldn't have gotten much, if any, direct sunlight. It doesn't seem to like disturbed land, roadsides and such: with a few exceptions, I've only seen it growing in spots that obviously hadn't been mowed or tended in any way.

Plant Number Two also looks like it's probably invasive, based on the size of some of the clumps I've seen.

UPDATE: #2 has been thoroughly identified as Sicyos angulatus, which goes by various cucumber-related names (burr-cucumber, oneseed burr cucumber, star cucumber). I was both right and wrong about it being invasive; it's apparently from North America originally, but they're invasive elsewhere. 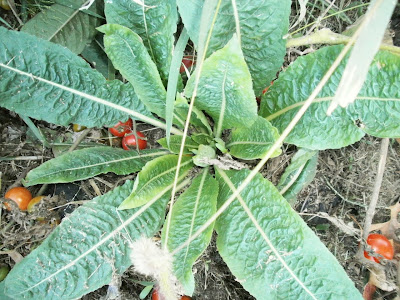 Plant Number Three.
Plant Number Three suddenly appeared in the garden under a tomato plant; I first noticed it on Oct. 6, when I took this picture, but presumably it'd been growing for a while before that. I have no plans to eat it, but it looks like it might be edible, and we don't really have any idea what the previous owners of the house had planted in this garden two years ago; it could be a volunteer of a leafy green something or another. Or it could just be a regular weed, I suppose. I really have no idea.

UPDATE: #3 is apparently Oenothera biennis, the (inedible!) common evening primrose. Most of the photos that come up when you search for the species are of the flowers, and therefore not that useful to me, but I found a couple of the first-year foliage which were pretty obviously the plant in question. 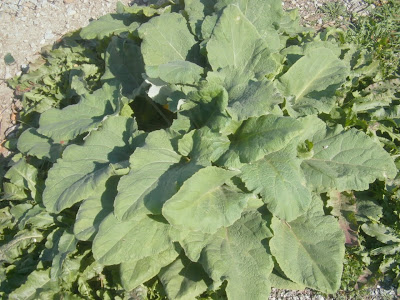 Plant Number Four.
Plant Number Four's photo was taken on October 9, but it could have been taken at any time between April and October; these are pretty common, and they're especially common in the alley where I found this one. At first, I thought it was rhubarb -- it has the same big, broad leaves and low, rosette form, plus there's rhubarb growing further up the alley from this plant. But the leaves are different: thicker and more substantial than rhubarb, duller in texture, and rhubarb leaves get much bigger. Whatever it is, it seems to favor disturbed areas, it's not fussy about light, and it can handle really crappy soil: I see a lot of it growing in gravel, or right next to tree trunks.

UPDATE: Disappointingly, plant #4 turns out to be burdock, Arctium sp. (I have some reason to think it's probably A. lappa, but that's far from certain.) I was kind of fond of it, from the leaves. 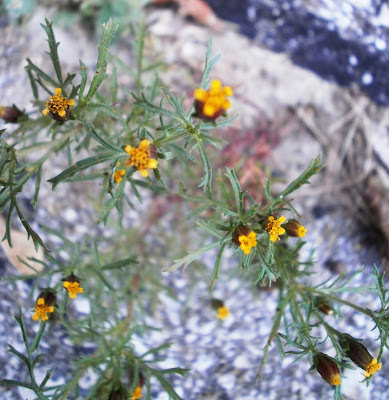 Plant Number Five.
Plant Number Five is my favorite. I found it in a parking lot in Iowa City, growing straight out of the concrete. It's tiny: maybe four inches across, four inches tall? I could tell there were flowers, but couldn't make out any of the detail you see here with my naked eye.

Well, I wear glasses, and look out of both eyes, so I guess it's my casually-dressed eyes, to be accurate. Anyway.

I think it was on the north side of the building, and fairly close to the building, so probably not a lot of light. I've only ever seen this one plant, so I don't know what kind of habitats they might prefer. The picture was taken on Sep. 15. The leaves have weird, irregularly-spaced bumps on them that might be a pest of some kind, or might just be a natural bumpiness. No clue. I like it mostly because it comes close to being pretty. Doesn't quite make it, and you have to be down right next to it to see anything, but it feels to me like the plant is at least trying for pretty.

UPDATE: #5 is looking like Dyssodia papposa, or "fetid marigold." It's also native to North America. Apparently it smells bad, but I didn't notice anything at the time. Of course, there was also a lot of wind that day.

So that's the set. All the photos will open much larger in a separate window, if needed. Any guesses what I've found here? Thanks to Don, Lee, Garden Groans, 2 different Anonymouses, Errant, and Paul for their help.

Well, I can identify two of these right off:

Plant #4 is a burdock, Arctium sp., an introduced biennial weed, whose clinging burs were the original inspiration to the inventor of velcro.

The others leave me guessing. In foliage and habit, plant #2 looks a lot like the weedy annual spiny cucumber (Cucumis sp.), but the fruit is wrong. This is growing in my neighborhood, and I've been wondering about its identity for the last year. Could plant #1 be a euphorbia of some sort? And plant #5 looks a bit like a signet marigold, Tagetes tenuifolia, but anybody'd have to feel very lucky to have them growing as weeds.

Though I am quite sure that the plant No.1 is a plant of the genus Bidens, I am not so sure about exactly which species it is, without seeing it's leaves. I think it might be B. radiata.

Plant No.2 is Sicyos angulatus. In Korea it is a serious invasive plant, as Kudzu is in Southern United States.

Plant No.4 reminds me of Arctium spp.

Just time for one right now: Plant no. 2 looks like One Seeded Bur Cucumber, Sicyos angulatus. Check out: http://www.illinoiswildflowers.info/savanna/plants/bur_cuke.htm

Plant #4 - reminds me of Burdock

Plant number three looks like it is similar to the NOID I have growing in my strawberry pot so I'd be interested to find out too. I bought the strawberry from an organic farmer I know, the attached plantlet looked like a dwindling weed that would go away but I kept it out of curiosity. Now the leaves have grown surprisingly tall like in your picture but not as dense. I thought it looked edible too but wasn't ready to test it myself.

The last one reminds me of Peganum harmala, but the leaves are too thick and the plant too small.

My real guess would be that weed whose seeds are famous in Japan for eating...part of the Asteraceae. I'm oblivious to nomenclature at the moment.

"The roots of the Evening Primrose are eaten in some countries in the spring, and the French often use it for garnishing salads"

PFAF give it a 3 out of 5 edibility rating

The problem would be being absolutely sure that it was the right rosette-ey thing you are eating before the flowers come.

Thanks for identifying the Burdock for me - I see that all over Taos, New Mexico also and had wondered what it was. And as far as fetid marigold - I thought they all stunk so one named fetid must be pretty bad.