I don't remember where I read it, but I saw somebody make the claim that amazon lilies (Eucharis grandiflora) can flower up to three times a year. This surprised me, at the time, because the one I've had here at home hadn't even thought about flowering in the not-quite-two-years I've had it, and at work, they only ever seemed to be available in the winter, which I thought sort of implied that they were winter bloomers. 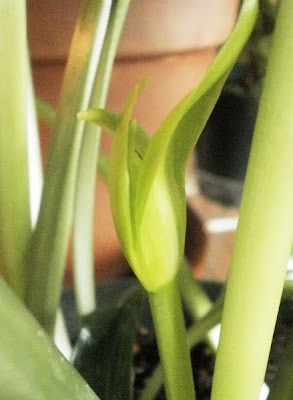 But whatever they would normally do, and whatever they're capable of, my plant is finally getting a flower bud! And it's winter, so maybe they are winter bloomers.

I'm very excited about it either way; I didn't like the photos I came up with when we had some flower at work two years ago, so this is, I'm thinking, another chance to get that picture. Plus the flowers are scented, and scented stuff is almost always good.

Karen715, in the comments at the above-linked post, said that she'd been told that Eucharis will bloom if they get cool temperatures. Davesgarden.com says they're hardy to about 20F/-7C; Gardino Nursery says not to let them go below 45F/7C. Either way, a lot more cold-tolerant than they look. Which does sound like a winter-flowering plant. Garden Web commenters, on the other hand, recommend stressing it in the winter by letting it dry out.

I'm inclined to side with Garden Web on this one. It's more likely this plant got dried out than that it got cold. Only the plant room, and sometimes the basement, ever get particularly cold here, and the Eucharis has lived in the living room for at least the last year: I don't know when it would ever have gotten cold. Everything, on the other hand, gets dry from time to time here.

It's been very easy to grow, and as far as this goes, I would have been perfectly satisfied with the plant had it never flowered: the foliage is shiny and dark green, and plants eventually get quite large. I've only had trouble with it when I first brought it home from the greenhouse: it dropped a few leaves at the very beginning, but I haven't had any problems since then. (Technically, that should be "when I brought them home: at work, I divided one of the plants we got into I think five 4-inch pots, and then over time wound up buying two of the 4-inch pots from work, which I eventually wound up potting together. Both of the 4-inch plants dropped leaves and needed some time to adjust after they were purchased, though they handled their repottings and division like champs.)

A number of the commenters at davesgarden.com also mentioned having passed plants down through multiple generations of family, which surprised me. Perhaps that's why they're not found in retail that often? If you get the opportunity, either by passalong or from retail, I do recommend the plant. It's much easier than it looks.

Last time I was at Logee's , they had a spectacular one in full bloom above their waterfall. But I'd always thought they needed higher humidity than you can easily attain in the house.

How exciting for you! Do share your pictures of the blooms with us, please.

It is quite true they bloom a few times a year or even more depending on how well you take care of it. I live in the tropics and the ones in my garden has just bloomed. I have also seen the ones sold in nurseries having flowers all year round. So its not true that they are winter plants. cheers

Congrats! I love their flowers, so beautifully simple and elegant.