The Quad City Botanical Center, Part 2 of However Many

This is the second post about our visit to the Quad City Botanical Center (henceforth QCBC) a few weeks ago. (Part 1) 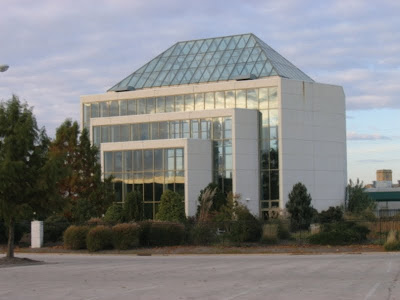 The QCBC building. Photo by Ctjf83 at Wikipedia.
The tropical plants area of the QCBC is divided up in a way that makes it feel relatively small, but the pamphlet the husband picked up says it's 6444 square feet (599 square meters), and 70 feet (21.3 m) tall at its tallest point. So there's room, and somehow they've managed to get some very big plants in there, even though their website says they've only been around since 1998. (Presumably some of the plants were of pretty good size before they were planted.)

My favorite, naturally, was the Pandanus utilis. 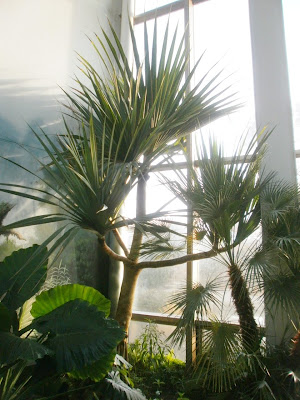 Pandanus utilis.
I tried to take a picture that would show the spiral arrangement of leaves, to explain the common name "screw pine," but the sun was behind the plant, and there was only so much I could do. This was the best one I got: 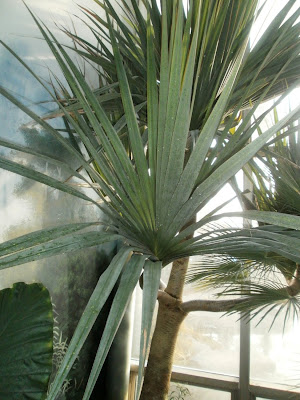 Seeing this one at the QCBC made me even more determined to get a Pandanus utilis of my own someday, though. Not that I needed the push.

Odds are that more visitors are impressed by the coconut palm, Cocos nucifera, than the Pandanus. It was certainly much taller, if nothing else: 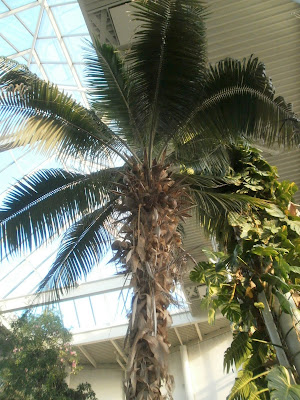 Cocos nucifera.
And it did, I admit, educate me a little as to how the coconuts are attached to the plant: I always thought they were held closer to the foliage than that. (You may have to open the picture in a separate window to see the coconuts.)

Not all the big, impressive plants were unfamiliar: the QCBC also has the largest Murraya paniculata I've ever seen. I can't imagine how overpowering the smell, when it's in full bloom. The people who clean the room must hate this plant. (My own makes a mess of the husband's office on a regular basis, and it's a tiny fraction of the size of this one.) 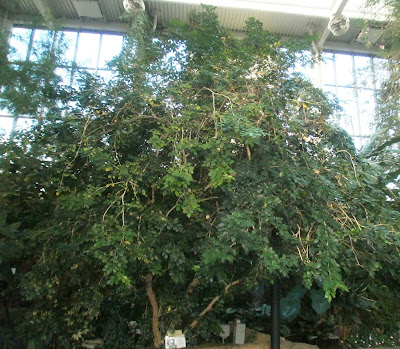 Murraya paniculata.
They also had a big, healthy Philodendron erubescens that was trying very hard to pull down the building: 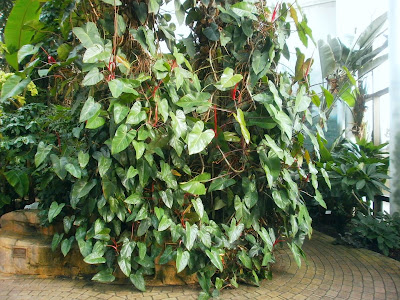 Philodendron erubescens (?).
I suspect there is a law that all botanical-garden-type places have to have at least one gigantic Alocasia or Colocasia somewhere. 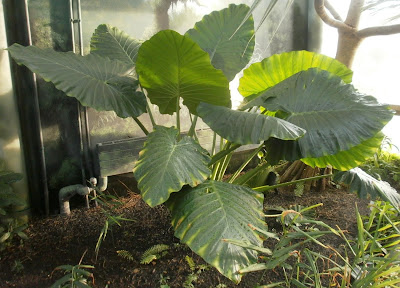 Alocasia sp.? Colocasia sp.? I'm not really getting any better at telling the two apart. . . .
I was surprised to find a Duranta at all (it's not a plant I think about a lot, or expect to see anywhere), but finding a really big, chartreuse one was a pleasant surprise: 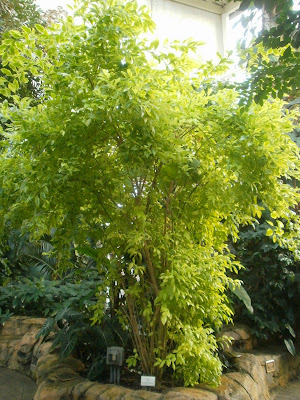 Duranta erecta 'Golden Edge.'
No flowers on the Duranta, which is too bad. I want to smell one again sometime and see whether I still think it smells like cookies.

There were pothos plants climbing, literally, the walls (you can see some of them in the background of the pictures from Part 1), but this particular one got to the ceiling by climbing a support column. 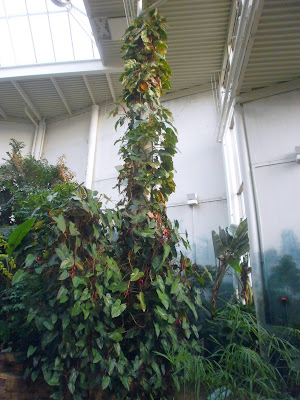 Epipremnum aureum.
I also saw a Syngonium podophyllum with mature leaves at the QCBC. I'd seen this before, but it'd been a long time: 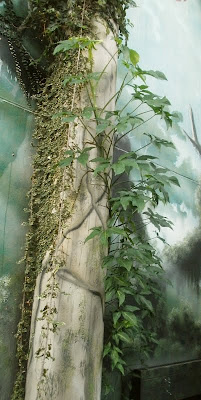 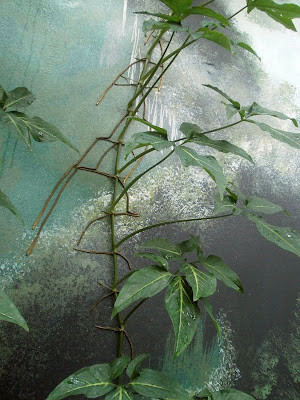 The plant that most impressed me, though, of all the plants there, was their Caryota mitis (fishtail palm), which was not only enormous -- 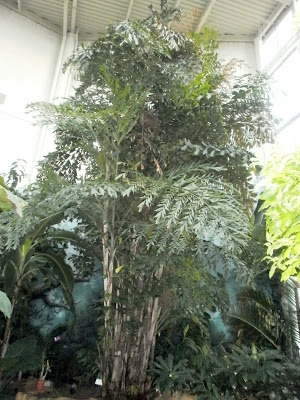 Caryota mitis.
-- it was also flowering. Rather a lot. 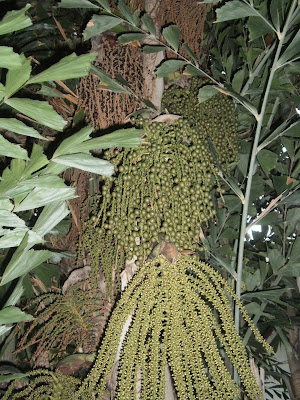 The flowers aren't pretty, but apparently they don't have to be in order to work. 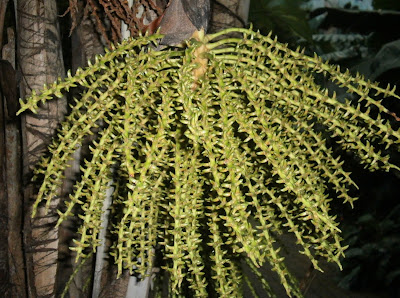 And this very new flower below looked like an octopus to me, which makes me like the species way, way more. I've never had good luck with C. mitis indoors (in my experience, it's hard to find one that's not buggy), but if they can grow octopi/-puses/-pods, then I think I need to rethink my position. 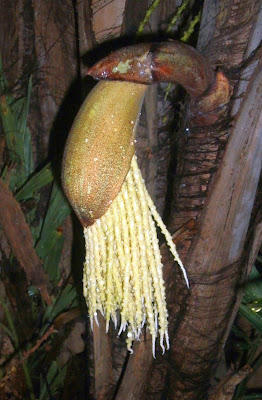 They also had a few other very large plants that I'm leaving out of the post because they didn't photograph well, including a Chorisa speciosa (silk floss tree) that nearly touched the ceiling and was dropping pink flowers on everything underneath it. I'd heard the name before, but it wasn't a plant I was familiar with at all. In person, it was maybe a little too huge and a little too far away for me to relate to, but still. Always nice to meet new folks.

There were also quite a few gigantic banana plants (Musa sp.), and a very large but badly lit Breynia disticha (snowbush, also sometimes Breynia nivosa). Maybe I'll get pictures of those the next time we go.

When I volunteered at the conservatory in Saint Paul my favorite thing to do was tell people about the life cycle of fish tail palms. I loved the look of horror they'd get when I told them that the entire trunk dies as soon as the bottom most fruit ripens. Their life cycle is actually really fascinating which makes me love them even more (even if I'll never attempt to grow them indoors) because it's just so different from most palms. The QCBG seems to be a lot nicer inside than I would have expected from the outside shot. That Duranta is beautiful. This comment is really choppy and awkward. I apologize.

You volunteered at the Como Conservatory? 'Cause that place is awesome. (If it wasn't the Como, then, um, clearly there's some other place that's more awesome than the Como is.)

It most certainly was Como. It's really a great place. I spent the winter in the palm dome "interpreting" the wonders of the Arecaceae family to the masses and spent the summer either in the butterfly garden or the waterlily pools. It was an awesome experience. It amazes me how Como is always packed with visitors yet I have never seen more than 5 other people in any of the Chicago conservatories (even though the city is like 3 times the size of the Twin Cities).

We have a Duranta in the conservatory. It is a while since it flowered but I remember it was very sweet-smelling.

Pandanus utilis is neat. I saw one in Munich a couple of years ago, and stood there in the greenhouse thinking, "oh, so that's why they're called screw pines!"

I think the elephant ear you've got pictured is an Alocasia odora. I've got one growing in my living room. It's a wonderful plant.

Aww! That pandanus is downright cute! I'm so used to the one in the Lincoln Park Conservatory, which is a damn giant. This QCBG place looks fantastic, I'm already getting my googlemap and wondering when I can visit.