I am displeased with the quality of winter we've been receiving so far. We've seen almost no snow (I'd guess less than an inch/2.5 cm), and the early-December temperatures have been considerably colder than they'd been in the previous few years. I was hoping for the opposite on both counts; as it is, I can barely take Sheba out in the morning without losing a finger to frostbite, and it's not even pretty out. 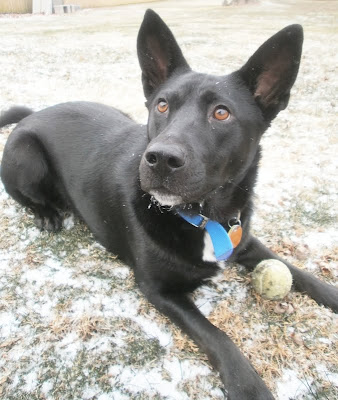 I'd thought that by this point in the year, I'd have a better Sheba/snow picture than this. I'm looking forward to seeing her react when we do finally get a serious snowfall: she'll have seen snow before, last year, but I haven't seen her see it yet.

I finally had a chance on Thursday to work on Nina's new place again, and, well, there is progress, but it's slow and unpleasant: turning the aquarium on its side, setting down paper towels, pouring vinegar over them, and then letting it soak in for a long time (maybe an hour? I wasn't timing it.), does seem to help. (I am indebted to NotSoAngryRedHead for the suggestion.) It's also very slow, and progress is incremental at best. After the first round, I wasn't sure anything had happened at all; the husband had to convince me that there was a noticeable improvement before I was willing to try a second time. And then after the second time, I could see a noticeable difference, so I was willing to try a third.

Even with this, there is still something up around the very top of the aquarium that is different, and doesn't come off with vinegar (nor Windex, acetone, CLR, razor blades, soap and water, "Goo Gone," rubbing alcohol, or cursing, to date). And a few isolated spots on one side of the glass don't seem to be responsive to vinegar treatment either, though they appear to be made of the same stuff, so that's weird.

In any case, this is clearly going to take a long time, which is frustrating. And we haven't even started to address the lid-and-lights situation. But I suppose the silver lining is that if/when this ever does reach a presentable point, it will be that much sweeter.

My last resort is usually a combination of vinegar, baking soda, a scraper, boiling hot water and the Mr. Clean Magic Eraser. I swear by all, either on their own or in combination. The latter has gotten me out of many a tough situation.

Cute pic of Sheba. The frost on her chin makes her look like she has a beard. :)

I'm sure Nina will love having a bigger home.

A trick I learned from keeping saltwater aquariums (which are constantly producing calcium deposits) is to use muriatic acid. It's much stronger than vinegar, so I dilute it to somewhere around 5-10%. The usual safety concerns apply. Don't breathe the fumes, don't splash it in your eyes, etc. Also, you should probably wear rubber gloves, unless (like me) you don't mind a slight tingling sensation in your hands. If that didn't scare you off, you should see some good results. It works much faster than vinegar (minutes rather than hours). A razor blade can also be used to speed up removal. Also, I've never had any issue with the acid damaging silicon seals. My aquariums all continued to hold water.

And to the commenter who recommended vinegar and baking soda: While those may be good cleaning products on their own, when combined the baking soda will neutralize the vinegar's acidity, rendering it useless.

VERY Cute picture. I know what you mean about the snow. I want it to be winter-like during wintertime. Let it snow!

We are so spoiled in the SF bay area that we don't have to worry about snow when doing a landscape design planting plan. However, I do envy you that you get to really enjoy the changes of all four seasons. Cute picture of Sheba the Santa Claus dog.

I like Christopher's suggestion of muriatic acid - you can buy it easily in pool supply stores.

If a few soaks with vinegar is only pulling minimal deposits, it's a bad case. You weren't joking. Another thing I'll do is fill the container with hot water and a lot of vinegar and just let it sit, agitating the water occasionally (i.e., when I remember it) and using a soft sponge to rub off deposits as they start to slough off. If the object/thing doesn't hold water, I'll put it in a container that does which sometimes means the bathtub. But on the brighter side, the vinegar solution does wonders for soap scum!

Out of curiosity, did you try the 20% horticultural grade vinegar?

Well, it may not be hard water. I never really knew what it was. I did another soak with vinegar a few days ago, and I swear it looked worse after that than it had before, which shouldn't have happened. Razor blade, used in conjunction, did nothing visible whatsoever. So I am very close to being ready to give up.

The husband was supposed to buy a Mr. Clean Magic Eraser when he was in town last Wednesday, but he forgot, so for the time being I'm pretending like the aquarium doesn't exist again, lest I get frustrated thinking about it. I'll think about it again when I have something to work with again.

I didn't try the hort grade vinegar; I don't know where to get it, and we had some vinegar here already so I was working with what I had. As I'm not certain what the actual cloudiness is from, I'm reluctant to throw more acid at it: if it's no longer helping and now makes the situation worse, then using stronger acids on it seems ill-advised.

I may post a photo of the aquarium this Saturday, in hopes of . . . well, I don't know, actually. In hopes that doing so will lead to the situation being resolved, I guess. So far, it's been frustrating enough that I kind of wish the husband had never found the damn thing.