The Quad City Botanical Center, Part 3 of What Turns Out to be 3

This last post (Part 1; Part 2) on the Quad City Botanical Center (QCBC) doesn't really have a lot of organization to it, unlike the other two. I'm just trying to cover the plants I think you'd want to know about that I hadn't already covered, basically.

The plant I found most interesting was one I hadn't heard of before: 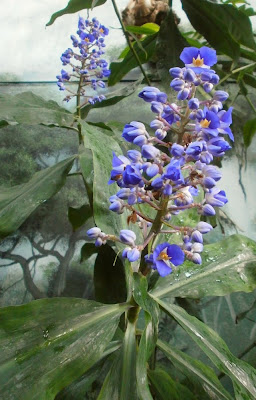 Dichorisandra thyrsifolia.
Dichorisandra thyrsiflora is in the Commelinaceae, the family of such easy indoor plants as Tradescantia pallida and Callisia fragrans, and yet I'd never heard of it. That's probably because it's a little big for a houseplant: 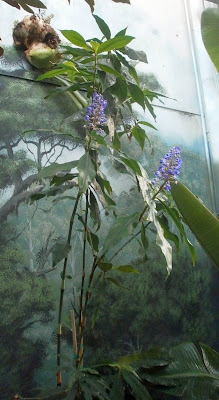 and there could be cultural issues I'm not aware of besides. I mean, I would be surprised if it were particularly hard to grow indoors -- I can't think of anything else in the Commelinaceae that is -- but maybe.

Glasshouse Works does sell them, and claims they're easy to grow. Perhaps someday I'll try. The flowers are pretty impressive: The camera continues to have difficulty reproducing certain blues: the flowers are more of a rich, dark blue-violet than the medium blue they show as in the photo.

I also saw a plant at the QCBC that I'd previously only encountered in a specialty website that sold plants for terrariums (I no longer remember which one): 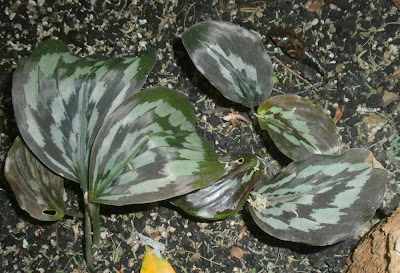 Kaempferia pulchra.
I initially thought it was yet another Calathea, but a nearby sign identified it as Kaempferia pulchra, which is in the ginger family (Zingiberaceae). I've never seen anyone growing it as a houseplant, so I can only assume that it's exceptionally demanding. Or maybe it's exceptionally slow to propagate, making it not worth the effort. Something: there must be something wrong with it. But, hey, pretty.

I was also impressed with the "red tower ginger," Costus barbatus, though it looked like the blooming was over a while ago: 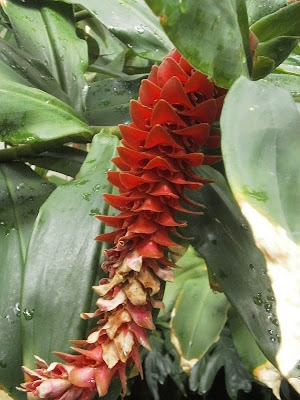 Still, though, it was a nice big plant, which is impressive enough all on its own. 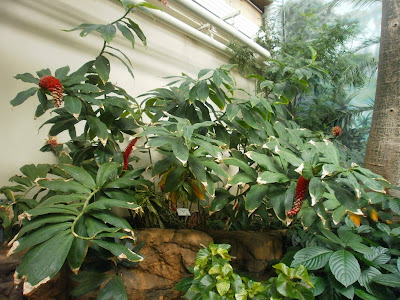 Costus barbatus.
The QCBC is very, very light on succulents, unfortunately. The only plant that was new to me was Euphorbia viguieri, which looks sort of like someone threw E. milii (thorns, flowers) and E. leuconeura (tuft of leaves at the top, longish, spoon-shaped leaves, narrow base that gets wider with height) together in a blender and split the difference between the two. It's not a very good picture, but that's okay, because it's not a very pretty plant: There's one NOID that I'm particularly interested in: it was near the Carica papaya, and resembles it, but the leaflets are a lot narrower and more completely divided. 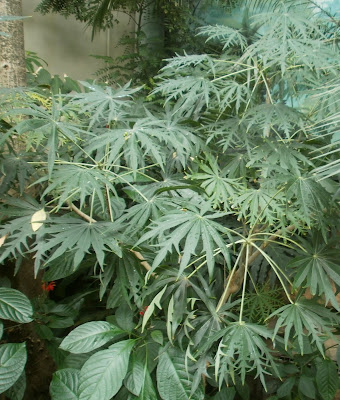 It's not impossible that it's just a Carica at a different stage of development, but I couldn't find any Carica leaves that looked like this in a Google image search. I also considered Schefflera, but couldn't find any of those that were particularly pointy except S. elegantissima (still better known as Dizygotheca elegantisisma), and these leaves should be much darker in color than S. elegantissima. (Cannabis sp. would be a possibility too, if not for the fact that, you know, it's not legal. Also I don't think Cannabis has leaflet margins that are that fancy.)

I know, it's one of those cases where looking more intently for an ID sign at the QCBC might have saved me a lot of trouble. But still. Any ideas?

UPDATE: Grower Jim identifies it in the comments as Jatropha multifida.

And while I'm asking: I'm pretty sure I've seen a bromeliad inflorescence like this recently on another blog (Garden Adventures? The Rainforest Garden?), but when I tried to find it again, I couldn't. I didn't remember seeing anything like it before, when I saw it at the QCBC, so wherever I saw it must have been fairly recent. The plant itself didn't look like anything special: I would have thought it a Guzmania if I'd seen it without flowers. UPDATE: Both Grower Jim and Rainforest Gardener agree that it's probably an Aechmea, even without seeing one another's comments.

Finally, a NOID orchid in bloom. The QCBC didn't have very many orchids at all, and this was the only one I saw that was blooming, but the color impressed me. 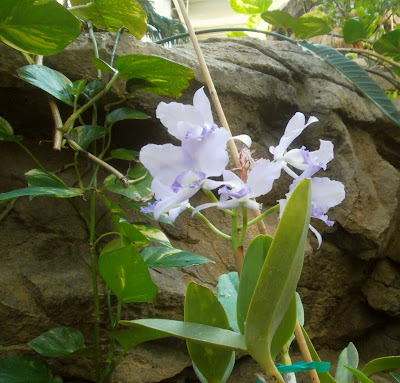 I'm leaving a lot of photos unposted, of course, but they may show up at some point later on. Or I might go back later and take new, better pictures. I think you get the general idea of the place regardless. Considering that it's only an hour away and I'm in a small rural Iowa town, I think it's a remarkable place.

Even if they won't let you buy the plants.

I used to have a Kaempferia pulchra which had been sent to me in error for a K. galanga. The company said I could keep it and got me a K. galanga only a few months later.

As long as you keep it warm, above 15°C and reasonably humid around 50%ish it will be happy. It is tuberous and can put up with under-watering for short periods. The flowers are gorgeous pinky-purple and new ones come out every day. It is happiest when the temperatures are around 20-30°C. Those leaves look really fancy when they are fresh. I gave it away when I moved into a smaller flat and never saw it again.

It looks like a Carica to me. There are a lot of species of Carica and even a few different forms of C. papaya.

I grew dichorsiandra thysifolia outdoors one summer as a container plant. I had planned to overwinter it indoors, but a bunch of rabbits ate it to death, so I never got a chance.
Love the Kaempferia... and I wouldn't assume there is anything wrong with it -- there are TONS of great plants that somehow never got onto the market.
My guess on the NOID carica-like-plant is cassava (Manihot esculenta) It can sometimes have pretty jazzed-out leaf margins -- as here http://www.smgrowers.com/products/plants/plantdisplay.asp?strLetter=M&plant_id=3196&page=

Well, I can't help you with the NOID, but have I told you lately how much I learn from your posts? Thanks.

I think the NOID is one of the assorted varieties or species of Manihot (tapioca). The blue ginger (the thing that I can't remember the name of but is actually a spiderwort) is a pretty easy houseplant, they take to cutting back pretty well so size isn't TOO much of an issue.

I remembered later on that I had only kept my Kaempferia pulchra in a humidity tent for the first months after getting it, to increase its size from two little stems. After that I kept it in a room where the humidity regularly fell to 30%.

I totally want that euphorbia. Sigh.

The NOID plant near the Carica is Jatropha multifida. It's a great foliage plant and also produces red flowers.
I don't recognize the bromeliad. If I had to guess a genus, I'd say Aechmea.

I have seen that NOID before but I wasn't sure about its identity.. the other commenters seem to be right about it being tapioca though. The bromeliad inflorescence is an aechmea... I can't remember the name... I'll get back to you.

I'm pretty certain the NOID with the palmate leaves is, as Grower Jim says, Jatropha multifida: I did Google image searches for Carica papaya, other Carica species, and Manihot esculenta, and although I see the resemblance, I was unable to find any photos of plants that had leaflets that were that narrow, with margins that were that pointy. On the other hand, compare this photo from davesgarden.com: the leaf shape is identical.

I appreciate the suggestions, though. If nothing else, I'm way more familiar with papaya and manioc than I was this morning.

I've seen Dichorisandra thyrsifolia sold in the mass-market bulb catalogs, though I cant remember which. Shouldn't be that hard to obtain, if you want it.

Sigonee: I like that Euphorbia viguieri, too. I read that it's not hard to grow, it's self-fertile, and it sometimes volunteers new plants in neighboring pots. Also palmbob over at Dave's Garden writes that it's quite cold-hardy. And it's not hard to find online (check Arid Lands, Corona Cactus, others). Don't just sigh for it, go for it!