In May 2009, I bought a Euphorbia milii. I was never all that crazy about them, but I like Euphorbias in general, and Plowing Through Life (who was still Water Roots at the time) spoke highly of them, so I figured it was only sensible to give them a try. I picked out one with lots of salmon-colored flowers on it, brought it home, and watched as it dropped all the flowers.

And then, for another seventeen or eighteen months, basically nothing happened. The plant got taller. It grew some new leaves, it dropped some old leaves, but it wouldn't rebloom. Did it need fertilizer? I fed it, then fed it again. Nothing. Did it need more light? Well, too bad, because I didn't have a brighter spot for it, and anyway it was in a pretty bright spot already. Was it, perhaps, rootbound? Pulled it out of the pot to check and found that, if anything, its pot was too big, that either some of the roots had died or it had been over-potted from the start.

So this, though only a single flower, and not even a particularly interesting flower at that, is a huge deal: 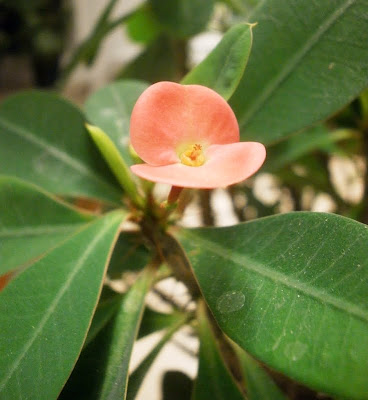 What changed? One of the plants in a spot with really good light got big and had to move, freeing up some space, so the Euphorbia milii has had maybe two or three months of some sun, plus supplemental artificial light. Apparently the problem was light all along, even though it was in what I thought was a pretty bright west window. Live and learn.

It might fill up with flowers now that it has extra light. It will look nicer when it is full of blooms. The flowers are tiny, but I think they're kind of cute.

It's always great when our efforts pay off and we reap the rewards in beautiful blooms. Hoping that many more will follow.

yeah... light is the big issue with these guys... they'll plug along without it, but they won't bloom unless there's plenty...

I also found with my euphorbias that the more sun they get, deeper and richer color of blooms they give. And with decent light they flower all year round for me...
Good luck with your euphorbia!

I came to be the proud owner of several Euphorbia milii when the husband and I complimented a restaurant owner on her collection. We were presented with a large bag full of cuttings when the check arrived. I've been lucky with several coral colored blooms occurring through out the year. But the most exciting is another smaller one which I purchased much later. I've had it for probably 3 years now and it just finally bloomed, and they are chartreuse! The plants set right next to each other in a southern facing window. I guess even in cloudy Portland we get enough sun eventually.

Euphorbia milii... I have mixed feelings about them partly because the ones I like the best are small and everblooming with red cyathia, but this variety is old-fashioned -- a bit of a grandma plant -- and it's as common as dirt. It's typically used as rootstock for fancier hybrids.

Yet I've managed to kill even THAT robust variety. And I really can't stand the giant Thai hybrids (they look bloated to me even under perfect care).

In spite of all that, Euphorbia milii still makes me happy! I am currently raising at least 3-5 little guys, including a robust little red NOID, a white NOID, and 'Des Moulins' from Huntington Botanical Gardens. I have my eye out for a few more, select cultivars, the spikier the better: maybe 'Jerry's Choice', 'Cranberry Cowboy' and maybe one with chartreuse cyathia. Fun!

I also love how ancient Euphorbia milii is in cultivation.

Ours lost it's flowers, too (I'm also in Toronto). I've moved it closer to the light now. Thanks for the tip!