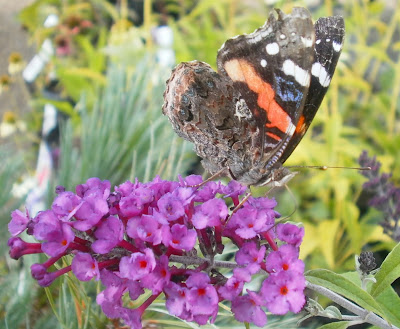 Another out-of-season photo (this is dated 28 August), because I'm kind of at a loss for ideas and the plants here have abruptly stopped being interesting. (The Peperomia pereskiifolia is blooming, but if you've ever seen Peperomia inflorescences, you'll understand why I didn't think that was exciting enough news to turn into a post.) But everybody likes butterflies.

Everybody except the Moth Supremacists, anyway.

I also have a wee bit of news, which is that Wallace's Garden Center, in Bettendorf, IA, is in fact going to do the Orchid Show thing again this year, on March 12 and 13. I'm planning to be there on the 12th, so if you live in the vicinity and go on the 12th too, then we could both be in the same building at once. Which is exciting enough on its own, but of course if we told one another how to recognize us, then we could also meet and talk about the orchids as well. We could have conversations like,

"Did you see this one over here that I can't pronounce?"
"I did! I couldn't pronounce it either!"
"Yes. It is very unpronounceable."
"Pretty, though."
"Oh yeah, sure, pretty. Definitely."

I don't know whether there are actually that many people reading PATSP who live in the area, or, if there are PATSP readers in the area, whether any of them would find being in my vicinity and having conversations about verifying the viewing of orchids particularly exciting. But this would be the time to start making plans, if anyone is close enough to the Quad Cities to think this sounds like a good idea. (If we planned it well, we could hit the QCBC before or after, too.) E-mail if you are so moved, and we'll make plans to make plans.

Hmmm, Iowa in March. No thanks! If you ever want to meet up somewhere warm, I'm in!