On either Wednesday or Thursday this week, I got up, let Sheba out of her crate, drank coffee for a while, and then went into the plant room and found a small pile of greenish vomit with leaf chunks in it. This much has happened before, usually when I'm watering, and I've been assuming that she was just picking up dead leaves that had fallen on the floor as the plants got moved around, and the leaves in question were usually safe stuff like Pilea and Nematanthus, so I didn't worry about it much. But in this case, I hadn't been watering yet, and these leaves were awfully green. Investigation of the plant room turned up a Yucca guatemalensis with some recently-torn leaves.

Obviously nothing happened, and she's okay, but it was still alarming. She's never acted particularly interested in the plants before (though the Beaucarnea on a low shelf in the plant room has tipped over, repeatedly, under suspicious circumstances). I don't know what would have changed.

The husband noted that she hasn't been able to eat grass lately, like she used to do a lot, because the grass is all dead and/or under snow, and I suppose Yucca would sort of resemble grass (especially this particular plant, which is a couple cut-back canes that resprouted two weak little baby shoots). I guess if throwing up was the point, then it worked the same as grass, too. And the Beaucarnea also looks grassy, barely, so we might have an explanation for those cases as well. But that all sort of begs the question of why the sudden need to eat grass in the first place. It's not like her diet's changed.

Anyway. So it looks like maybe it's time to go spray everything with the bitter-apple stuff again. I feel sort of silly doing it, because it'll wash right off again the next time I water, but if she needs the reminder, then I suppose I will anyway. 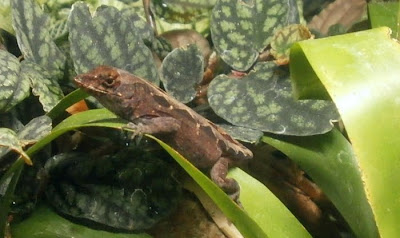 Meanwhile: picture of Nina beginning to shed (you can sort of see in the picture that the area behind her head, and around her left front foot, is a little lighter than the rest of her skin). She sheds her skin all the time, but I don't usually notice until it's well underway.

If you have a square foot or so to spare, you could plant Sheba some grass. Don't go for the scratchy quick growing oats or wheat though - would you want an abrasive breakfast? I grew grass for a bunch of cats all one winter to divert them from the houseplants. Untreated grass seed will do it, set up two planters and rotate them so that the grass recovers in time for her next munchies. Good for her health.

I was going to suggest the same thing as anonymous. But keep the grass next to her food and water bowls, so that, in the best case scenario, she learns that that particular bit of greenery (and no other) is hers.

Does Nina just wander around the plants as she wishes? Nice photo. Hope all is well with Sheba.

That's been my experience with cats, too - anything that looks vaguely grass-like gets munched on - Yucca, Beaucarnea, Cyperus, Chlorophytum... a friend's cat even eats her Aloe!

The worry with that is that 1) I worry that she would generalize to all the plants anyway (especially since she's apparently already eating them, and they're everywhere), and 2) that still leaves me with small piles of vomited-up grass laying around the house to be cleaned up.

I can't think of a time when I've seen her eat grass that wasn't first thing in the morning, which makes me wonder -- maybe she's just hungry? Maybe if I started feeding her earlier, she wouldn't bother with the grass or the houseplants? Presently, I let her out of the crate at 8 AM (give or take), and then we go outside between 9 and 9:30 AM because I need some time to drink coffee and wake up before I can be functional enough to take her out. I don't know how much earlier I could go, but I could wait longer to let her out of the crate, which might accomplish the same thing.

Well, the plants in her terrarium. She got out of the terrarium once, not too long after I first got her, and ran around the plants in the living room for a while, but if that were to happen now, I suspect it would wind up killing her one way or another -- either she'd fall into a box or vent somewhere, Sheba would eat her, or she'd get stepped on. Something would happen. So she stays in the terrarium.

The fact that Sheba's grass habit is so regular and her vomiting seems to occur primarily in the mornings suggests that she may have an overly acid stomach that feels nauseated when it is empty. I'd ask if the vomit ever looks frothy or yellow-bile-ish, but it seems you only happen upon it after she's swallowed some plant leaves, making the vomit mostly green. (The fact that the leaves look pretty unchewed also suggests that she's gulping them hurriedly for the purpose of throwing up, rather than munching because she likes greens.) This has happened to one of my dogs, and following my vet's suggestion to administer a bit of tagamet every 12 hours eliminated the vomiting (thereby proving his theory that my dog's stomach was too acidic to tolerate being empty). Sheba's a little young, I think, to have this sort of stomach trouble, which is common as dogs get older, but it's possible that Sheba's diet may not be sitting well with her; does she have dry food only? You might try feeding her earlier in the morning, while you're drinking your coffee, before you both go out. Or give her a bit of bread to calm her stomach first thing when she wakes up while you're going through your morning routine....

Well, it's not regular in the sense that she always does it; it's regular in that when it happens, it always happens at the same time of day. Even during the summer, she wouldn't always eat grass, and her diet's been relatively consistent over long periods.

The vomit does in fact often look yellowish or frothy (not so much frothy, but yellow, certainly, and I got a pretty good look at it the other day when trying to dab it up out of carpet). It does usually look like she's trying to throw up.

She gets a mix of wet and dry food; we were giving her dry food only early on, but she wouldn't always eat it, so we added wet.

Sheba's stomach seems to be fairly delicate anyway: some of the treats we bought at first (especially anything with strong, spicy-type scents) made her throw up.

You may be right. I can try feeding her before we go out and see how that goes. She's due back at the vet again in March, so if that doesn't fix it, we can ask him.

poor Sheba! What you describe (yellowish, frothy, morning vomits and poor tolerance for dry food and spicy bought treats) strongly indicates that she has gastric irritation; the good thing is that it's relatively easy to fix. (She also could be anxious, which would give her GI irritation or even an ulcer, though that is less common outside the small breeds.) Because testing is expensive, vets will usually recommend an empiric trial of either feeding a small meal of soft food before bedtime (to keep the stomach from being completely empty in the a.m.) and/or feeding shortly after waking. If this fixes the problem, great; if it does not, the next step would be to talk with the vet over the phone before the March appointment for more ideas of things to try - such as giving Sheba a trial of tagamet or pepcid for 2 wks or so to see if it helps (your vet would have to tell you how much to give her according to her weight). If _that_ proves curative, terrific. If it doesn't, then the vet can take a more intensive look in March when she has her checkup to look for parasites, infections, and other causes of GI irritation. Bottom line: dogs are not cats. It's not good for a dog to be throwing up frequently, since that in itself will irritate the lining of the esophagus (besides the fact that it simply does not feel good to be nauseated).